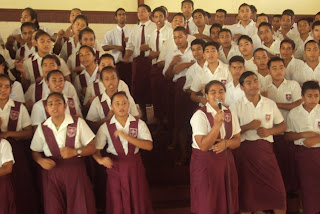 Apparently the USC football team has been psyching itself up before practice this season with gospel renditions of Bill Withers’ “Lean on Me”. Word got around to Mr. Withers who showed up to practice to host a sing-along. Now, true, the sing-along may not have spawned as many wins as I would prefer, but Head Coach Pete Carroll knows that it’s a moving song. And so does whoever picked the music for my school’s prizegiving. The students at my school spent a good 2 hours working out and rehearsing their rendition yesterday.

I brought my book to school because I knew we were in for the long haul, and as entertaining as it is to hear good harmony mixed with a second-rate synthesizer, I figured the opportunity for reading might arise. And it did. I finished my book. And just as I was finishing the kids started applauding and whooping.

I hadn’t been paying attention, and it turned out we were holding auditions for the “Lean on Me” lead singer, and the kids were pretty good about applauding everyone after they finished. Perhaps the strangest part, or the part that was most different from how things would be in The States, is that each lead singer auditioned with the entire student body choir.

Someone new would be called to the front, she’d sing the opening verse, then everyone would break into song and swaying to the beat and they sounded pretty good. It’s kinda hard to not sound good when you’re singing “Lean On Me” and you’ve been trained to harmonize since birth.

Over the two hours, we saw a slew of candidates from all 5 grade levels. There was a year 9 that had an amazing voice, but kept pluralizing “sorrow” at the end of the first line. Admittedly the good voice should have outweighed the poor grammar, but I couldn’t handle it. I was happy when they decided not to go with her.

A bunch of my kids got up and sang (okay, almost all of them are my kids, but I’m more apt to claim the ones with whom I’ve developed a good friendship) to mixed results. One of my particularly scholarly year 13s, Maryhellen, who I saw playing soccer during the Amazing Race, did a pretty good job. Between computers, soccer, and singing, Maryhellen is quite the Renaissance woman.

Only girls tried out. Though Bill Withers sang the original, the version that is currently popular in Samoa has a synthesized backbeat and is sung by a woman.

In the end, Goretti, a blithe year 11 with a sweet voice and a knack for improvisation, was chosen to sing the song at Prizegiving. She’s the one with the microphone in the photo up top. I got video of the song in rehearsal and during the real thing, but you’ll have to wait until I get to Ausetalia for me to post it. 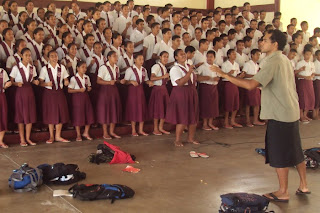 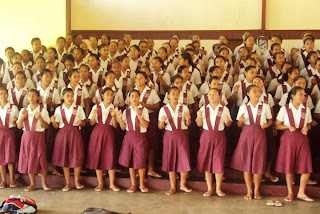 The girls' side. Maryhellen is in the back/semi-back row, third from the left, next to my year 13 Marie, who makes frequent blog appearances. 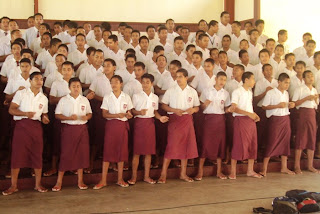 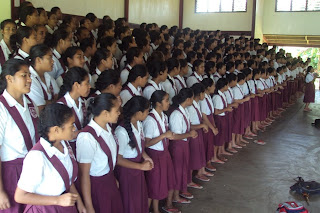 i wish i could hear the harmonies!