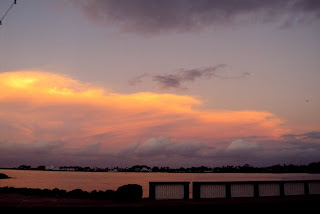 I wandered home after Prizegiving this afternoon, and though I wasn’t really thinking about it, there was a big shift in gears. With all the prizes given and the speeches made, school’s over and it’s time to start finalizing plans for this weekend’s trip to Pago and the trip in 3.5 weeks to Sydney. I would claim that there’s so much to do in so little time, but really I feel like there’s shouldn’t be too much to do and lots of time left. Thus the last-minute haphazard packing. Here are some other odds and ends from the week:
That’s all I got. I hope you’re well. Pictures below. 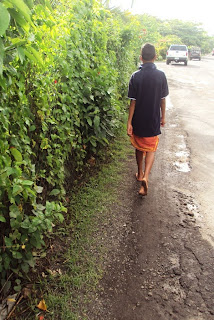 I walked behind this kid into town the other day. For like 3 blocks. 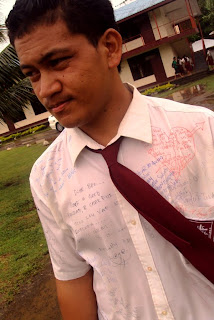 In the absence of yearbooks, students had their friends sign their shirts. Filifili displays his here. 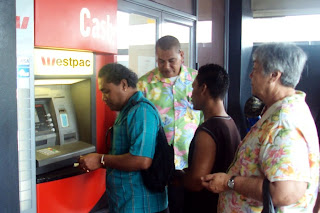 There were really long lines at the ATM on Wednesday. The man in the green shirt is actually a bank employee acting as the ATM attendant. He presses the buttons for users who are unclear on how to maneuver the interface.
Posted by Matthew at 7:00 PM

Good luck on the LSAT! I'm keeping my fingers crossed for you. Try to enjoy the vacation around it- I took mine up in SLO, and I think getting out of town and hanging out with Jen and relaxing really helped.

Like the picture of the kid you followed, he walked barefoot, kalofae ia na ia.