Volunteers for a Year 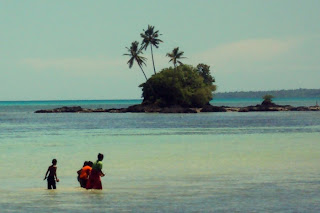 Phil and I played Connect 4 tonight for a couple hours. We played the game, which always reminds me of rainy days in elementary school, sitting on the floor in Phil’s living room, the vertical board setup on the fala, or Samoan mat. “I’ve definitely learned to sit with my legs crossed a lot longer,” said Phil. It was a delayed response to a conversation we had earlier this afternoon about what we’ve learned so far from our Peace Corps experience. It was a fitting conversation for today, given it’s the one-year anniversary of our Swearing In ceremony.

As you may recall, the Peace Corps is a 2+ year commitment, the ‘+’ is up to 3 months of training before the 2 years begin. Our training lasted from October 8 to December 15, when we were officially sworn in as Peace Corps Volunteers.

On this blog, I’m more apt to celebrate milestones in terms of how long we’ve been in the country rather than how long we’ve been sworn volunteers. As far as I can tell, the date of Swear In is mostly important for 2 (albeit important) reasons:
Last night I reminded Phil that today marked a year since Swear In. “I feel like we’ve celebrated being here a year a bunch of times already,” he said. It’s a good point. I think we’re entitled to celebrate the one-year mark for the entire period lasting from our arrival date to Swear In—kinda like Christmas gets celebrated until the Epiphany or Easter until Pentecost.

In any case, during snorkeling this afternoon, we got on the subject of what we’ve learned from our Peace Corps experience. Arriving in Samoa, I think everyone in Group 81 was still high on idealism; given all of our differences, I think each of us honestly came thinking we could make some kind of difference. And I think we’ve all learned how difficult that can be. “I guess you could call it patience,” said Phil, “but I feel like it’s also learning to be more passive—learning to accept the things you can’t change.” Indeed, it seems like everyone’s sense of idealism has ebbed and flowed over the year. We’ve all felt demoralized at times, but each of us has also experienced triumph.

We also talked about the wisdom we’ve gained. Neither of us could think of one specific nugget of wisdom.

But… I will bring it back to the 3-D glasses I mentioned back in November. 3-D glasses allow your brain to meld two different views of something and together they render a more much richer multi-dimensional image. And I think that is something I’ve picked up over the past year. Seeing global issues—global warming, war, etc.—through my American perspective versus, say, the perspective of my host family, the two images are vastly different, and reconciling the two, more perspective is gained.

So we’ll see how much more wisdom group 81 can glean in the coming year.

I swear this is the last “one-year” milestone. I hope you’re well. Pictures below. 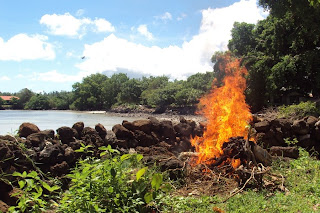 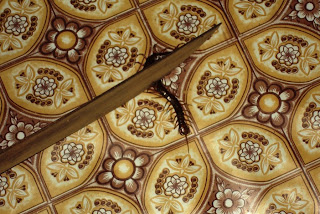 This centipede crawled out of the woodwork during Connect 4. 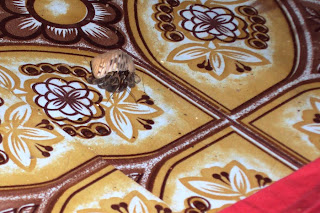 This hermit crab crawled out of the woodwork in the middle of the night last night. Maybe he came in with the tide?

"that in the torment of the insufficiency of everything attainable we eventually learn that here, in this life, all symphonies remain unfinished." Ron Rohlheiser quoting Karl Rahner.