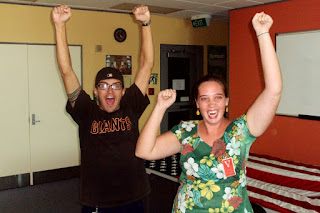 Daaaang. Texas Rangers got beat down tonight. At one point, one of the announcers on the American Forces Network, before praising Edgar Renteria, tried to affirm his objectivity by saying he didn’t favor either side, and that all he was rooting for was a 7-game series in which each game was decided by 1 run. After which I said to Blakey, “I’m rooting for a 4-game series in which each game is a blowout.” The series has yet to be decided, but at least the latter part of my wish came true in game 2. Ouch! But really, the thrill of the last 2 days has simply been watching baseball.

Through Facebook and talking to friends from back home, I know a fair amount of people who attended one or both games, and it’s weird because I don’t feel jealous at all. After living in Samoa for 2 years, I am disconnected from America enough that the thought of attending a World Series game seems surreal. It would be sensory overload; more stressful than fun. Like getting in a car and jumping from 10 mph to 100. It honestly doesn’t sound appealing.

But I miss baseball. I wrote about this nearly a year and a half ago after watching Field of Dreams, and as much as I’ve spent the time since then adjusting to a life without it, I still quietly miss it a lot. So part of the thrill in having the Giants go to the World Series is having an excuse to seek out a TV in Apia showing a baseball game.

Shortly after I posted Sunday, I emailed the Charges d’Affaires to ask about possibly watching a few World Series games at the American embassy, and she was cool with that. So I wore my Tim Lincecum T-shirt to sixth period yesterday, and as soon as the bell rang I made a beeline for the embassy.

I felt a little ridiculous emailing the Charges to ask if I could come watch TV, and I was completely prepared to sit in a corner at the embassy to quietly watch by myself. But it was the Charges who suggested the event might be more fun if I brought some other people. So Blakey came along yesterday and had a good enough time she came back for Game 2 this afternoon.

There was a brief moment of panic when I first arrived yesterday and we couldn’t find any channel showing the game on the handful of stations that come in through the embassy’s satellite dish. But then some embassy TV expert came in and changed the input, and the American Forces Network came through like a champ. This means that we get military commercials between half-innings and during pitcher changes. Although I’m still apt to recite, “And when it’s time for a change, think Speedy Oil Change...”

So just for a second, I’m going to use my soap box here to talk some trash...
Is walking in a run not one of the most embarrassing things one can do in professional sports? I’d say it’s worse than shooting an airball from the free-throw line or getting tackled in your own endzone. It’s the kind of thing where the opposing team winces in embarrassment for you. The kind of thing where even the scoreboard shakes its head, shrugs, and then chalks one up for the other team. The kind of thing Germans invented the word “Schaudenfraude” to articulate. In English, I’d just have to call it pitiful.

Bring it on in Arlington. 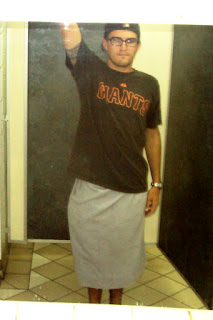 Me in my Lincecum T-shirt and my gray 'ie faitaga. 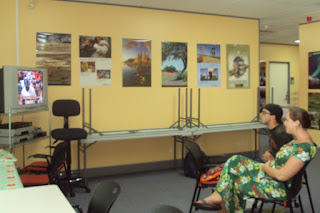 Blakey and I have been watching in the embassy's staff dining room. 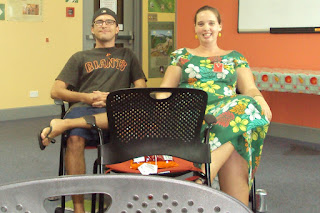 I'm with you. 4 easy wins would be just fine. I'm happy that you are able to watch the games. Nubia says hello. She works at St. Martin de Porres with me.

Your tattoo is showing... That picture of you and Blakey reminds me of the amex commercial where the guy uses his amex card rewards to buy his parents - who relocated to Instanbul - their old stadium seats. We can send your SC chairs if you decide to stay, or even that love seat you salvaged from the diocese.

Even as an A's fan, I can get behind how awesome that is.

glad to know you are able to see the games. i almost felt bad for those pitchers who walked bases loaded... but as my husband put it "don't worry, he's still making millions". key word= almost.