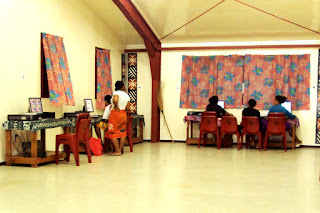 Last Tuesday my year 13s begged me to open the computer lab during the open-study period from 9:30 p.m. until bed time at 11:00. While I was more opening the lab to the masses at the beginning of camp, I’ve lately been a little over camp, and sitting in the corner with a classroom full of year 13s looking at pictures on their flash drives and listening to the latest from J Boog isn’t my idea of a restful weekday evening. But I agreed to open the lab anyway. And none of them showed.

That’s right: I was stood up by my students. A few of the year 12 boys who live on campus came into the room around 10:40, and I let them use the computers for the final 20 minutes. As you can expect, I was cranky about the situation.

It’s totally something I would do. I’m all about irrational, pseudo-subversive responses to arbitrary rules. Would it have benefited Amanda to have spent that time studying rather than trying to make some pointless statement about the tyranny of the supervising teacher? Sure. But it’s much better to sacrifice studying in the name of a principle; it’s always a thrill to be the martyr.

Fast forward to tonight. The supervision rotation found all the players in the same spot for the first time since last week’s episode. And the year 13s were at it again begging me to open the lab.

“We’ll come this time, but you have to pick us up,” they told me. “[That teacher] is mean.” Speaking the name of the teacher in question, of course. Until this afternoon I hadn’t realize which teacher had been holding them in. The news was slightly surprising because I was under the impression it had been someone else, and yet not surprising at all because the story made much more sense now.

See, the students in question are all trustworthy. Most of them are student prefects. They don’t fit the profile of the cigarette-smoking rebels looking to sneak out and raise hell. To deny them passage to the computer lab seems a little extreme. But then again, what is the entire Hall Pass system, but a way of asserting one’s power? A hall pass is completely function-less except that it reminds students about the Rule of Law.

The entire situation became more ridiculous when I actually went to pick up my kids from The Big Bad Wolf tonight. The teacher coarsely acknowledged me as I approached, and then I said in a quiet tone, “Can I have the computer studies students?” The teacher, looking to hang on to the asserted power, barked at the students a bit before allowing them to go. But I didn’t stick around to listen.

I figure getting between Amanda the Martyr and The Great Authoritarian is no way to spend a Monday night. 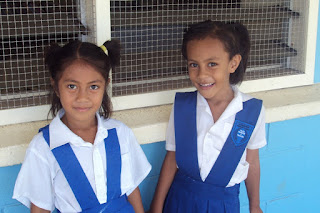 Did I already post this picture? If I did, it's worth posting again. It's from a few months back when a student borrowed my camera for an event. I think the girl on the right is her little sister. They're darling.