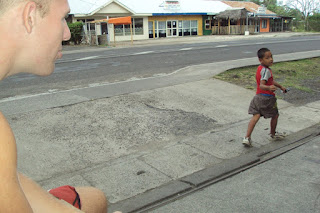 Growing up outside Berkeley, attending college in downtown Los Angeles, and living in San Francisco for a few years after, I’ve experienced a fair amount of panhandling. It’s an awkward, narrow line to walk balancing budget and compassion, and so inevitably we make up arbitrary rules about who we give to along the street. There was a guy who hung out near the Embarcadero BART station who used to repeat over and over, “A nickel and a smile will last a long while.” I would usually toss him some spare change. And there was a piano player who would play with a keyboard and amplifier downtown during the day and huddle in our neighborhood laundromat at night. I’d toss him a dollar whenever I’d see him around. But for whatever reason, “Ska kupe” doesn’t bring out my giving side.

As several visitors have pointed out in the Guest Contributor series, Samoa has relatively few conspicuous homeless. The streets of Apia are mostly empty at night, and those that are out tend to keep to themselves. Panhandling is, for the most part, limited to young children around town during daylight hours singing the unapologetically direct, “Ska kupe.”

“Ska kupe” is a slang contraction of the phrase “Aumai se tā tupe,” which technically translates to “Give me our money”—How beautifully collectivist is that? “You know that money in your wallet that is both yours and mine? Give it to me”—but in the modern lexicon essentially means, “Give me some money.”

The first time I was ska kuped was shortly after I moved in walking back to town from Ming and Hana’s Supermarket. Two children walking toward me, a girl no older than 7 and her younger brother. On seeing me, the girl stopped, pulled the boy back, and whispered in his ear. When she let go, he trudged right up to me, and with as much assurance as I’ve ever seen, he stuck out an open-faced palm and commanded, “Ska kupe!”

Ska is used with other objects, of course. It’s not uncommon to hear teachers to call out to students during Interval, “Ska tea!” When I was in the front office today, I used “Ska flash drive” talking to the librarian.

Still, the brash entitled demand of Ska kupe is not lost on Samoans. Consider the following situation. In Samoa, rather than accepting gifts and money and drinks from your friends on your birthday, it’s more traditional to buy drinks and food for others. So earlier this year, after computer class, one of my year 13s revealed it was Luana’s birthday. So without missing a beat, I turned to Luana and said, “Ska kupe.” The class seemed wholly entertained. 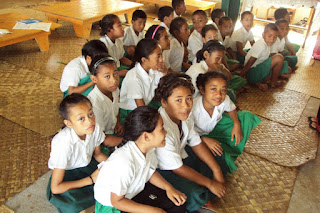 These are the kids from PCV Leah's school on the south side of the island. None of them gave me a ska kupe. 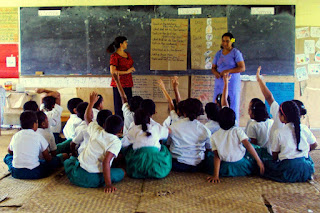 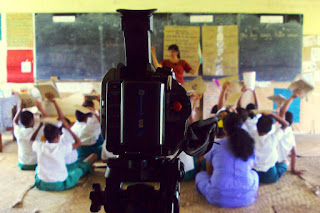 The view from behind the camcorder.

Where are you? Your blog is still on Monday even thought it's Saturday. I know from Nancy's blog that you finished the slide show. I'll assume working on that is the reason you haven't posted. Come back!

ska kupe?.. I truly hope that the government has worked something out concerning the little ones.. its either sad or sickening to catch the small children been chased around to sell anything or even to beg for money.. these kids should be put in schools for better education to help their families in years to come.. i totally disagree if samoa wont even consider a new beginning for these kids..

ska kupe..faamolemole :) you should write about the kids and their conversations. that is hillarious. Ska u.. (ska bite on a kekepuaa or a germanbun) if you so no..we not friends anymore...lool...it is just too funny..sorry bout the grammar...im LAZY... :)

I am from PCV Group 29, and believe me, "Palagi mai ska kupe" is not new nor is it pathetic. It is just Samoa! I am returning to Samoa after 32 years, and I can't wait to retort with "Sole, soia! Leia se ka kupe!" and then laugh like crazy. The kids used to die laughing when they realized we spoke Samoan.