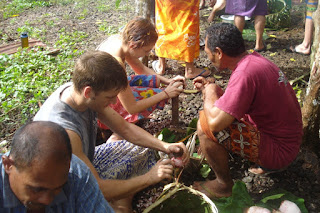 There’s something post-apocalyptic about it. It reminds me of “Mad Max” or “Waterworld” or even “Wall-E” in which people (or robots) trying to survive after the world has ended re-commission everyday items for new purposes—think of Kevin Costner filtering his waste with a modified Mr. Coffee or Wall-E with his cache of treasures he’s found in the dump. The practice in Samoa isn’t quite so dramatic, but it’s still a little off-putting the first time you think about it.

This trend is noticeable on the trip into town from the airport: even from the road it’s easy to see the Samoan thatched fales securing the roof with old tires. Some houses use the left-over scraps of the rubber sheets used to cut out the soles of Jandals. The foot-shaped holes form a sort of rubber net that holds a small sheet of corrugated aluminum that keeps the fale waterproof.

Culture Day in the village provided some more examples. Rather than using a vegetable peeler or a knife to peel taro and breadfruit, it’s common in Samoa to cut a tin can about an inch from one of the bases and to use the jagged edges as a peeler. In addition to using banana leaves and breadfruit leaves to cover the umu, the above ground fire used to cook whole pigs among other things, I’ve seen people use old refrigerator boxes.

Re-usable food containers are all over the place. Tip-Top Ice Cream—perhaps the most popular in Samoa—comes in a plastic blue box. My family used these tubs as jewelry boxes, containers for storing important papers, and as cheap substitute for Tuperware. Other popular reusable food cartons include SkyFlakes cracker tins and large plastic Best Food mayonnaise jars.

Sometime about halfway through training I tried not to notice as different members of my host family took large swigs from a plastic bottle of well vodka. It was only when they gave some to the baby I realized they were using the vodka bottle to store water.

I’ve actually adopted this technique, although it’s not something I picked up from my host family. It was Cale and Sara who pointed out water tastes better from a glass bottle than that from a plastic bottle. So pretty early on I acquired a finished bottle of Absolut, and I’ve used that as a water jug for nearly as long as I’ve lived in my house.

My own re-commissioning of everyday items doesn’t end there. When I couldn’t find a cooling platform for my laptop, I bought a cheap plastic basket at Big Bear. I lowered my shower curtain using the wooden pegs the biology kids used on their field trip to Mt. Vaea. Scout eats from old Skippy’s peanut butter lids.

And sometimes when I’m watching her eat, I feel a little like Mad Max.

I hope you're well. Pictures below. 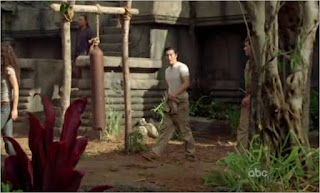 I noticed this while watching Lost last night. See that oxygen tank hanging in the background? That's a makeshift bell. Those are used everywhere in Samoa. I think it's safe to assume every village has at least one of those. I can hear them ringing outside my house from time to time. Hats off to Lost for its eye for detail.
Note: Kindly refrain from leaving comments about Lost. Thank you. 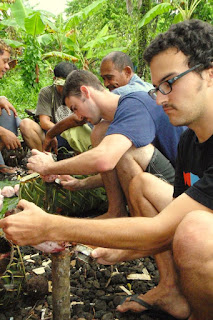 Phil and me, mustachioed, peeling taro with tin cans. 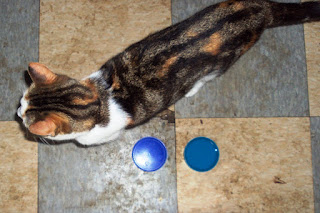 Scout and her food dishes. The dark blue (i.e. the chunky) is for food. The light blue (i.e. creamy) is for water.
Posted by Matthew at 8:00 PM

Great post. It's essential when living on a small island to try and re-use everything. Of-course pre-European times, most this were bio-degradable. Nowadays, plastic is used everywhere. Although Samoans probably re-use items for their practical use rather than trying to save the world, it is all the more important that Samoa creates more re-cycling initiatives and limits the use of commodities that have a limited use but are not bio-degradable. Afterall, bigger western nations have great landfills/dumps to hide their rubbish. On an island, the choices just aren't there.

No fair - I totally wanna leave massive comments about LOST! And you are driving me nuts with the pics from Lost and the absolute FORBIDDING us to comment...