Magazine Update and the Dog from Yesterday

It’s Finish
The magazine is done except for 4 things:
If I don’t get the first 2 tomorrow, I figure we can just turn their page into a Table of Contents. It will be more worrisome if they both submit and they write too much to share a page (which is pretty likely). I couldn’t write in the names of the Magazine Committee because I don’t really know who is actually on it. I feel a little like I am the entire Magazine Committee (people have been asking, “How’s your magazine coming along?”), but I’m trying to be inclusive. I made my own ad for another Apian vendor, but I can’t find any contact information for Samoa Stationery on the Internet, so I’m at a loss for what to do there. These are all relatively tiny details though. The major hope is that I don’t have to spend another couple hours scavenging and cropping photos. Although if I end up making that table of contents, that’s exactly what will happen.

The Dog from Yesterday 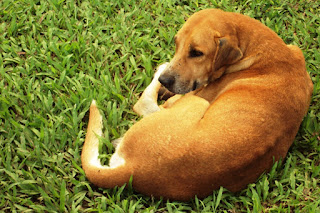 One of my friends in town asked if I could take photos at the National Memorial Service yesterday because for whatever reason she would be late if she could make it at all. She arranged a ride for me: I rode over to Taifagata Cemetery with her mom and her mom’s friend. On the way home, we stopped off at a fale’oloa to pick up a few loaves of bread for Sunday’s typically light dinner. And then we went back to my friend’s mom’s house to drops some things off.

When we get there, Mom sets the loaves of bread on the patio furniture outside, finds her keys, and opens the door. I follow her into the kitchen carrying the small take-away meals we received after the service. “Can you get the bread before the dog gets to it?” She asks me. Sure. I walk back outside to find the dog wolfing down a loaf of bread.

I’ve mentioned before Samoans can be nasty toward domestic animals, and though I was annoyed at the dog for complicating my life, I didn’t know what would happen if someone found out. So I quietly scolded him, tore a small chunk off where he’d been chewing, and took the bread inside. A couple minutes later I went back outside to wait by the car, only to find the dog eating a second loaf of bread I had missed the first time. This time it was a loaf of pane, which is sort of like Hawaiian sweet bread. It comes in individual “buns” that can be torn away from the loaf one at a time. So the fact that the dog has taken a chunk out of one of the buns makes it conspicuous this time.

Still wanting to cover for the dog, I ripped off the remaining corresponding bun (loaves are baked in rows of two), and in attempt to get the dog away from the scene of the crime and to destroy the evidence, I threw the bun across the yard. The dog goes tearing off, and I turn the loaf of bread the opposite way in the bag to hide the now-non-heeled end.

I go back into the kitchen, leave the bread on the counter, and then walk back outside. The dog, who has eaten way more bread than he’s used to at this point, is taking his sweet time swallowing the pane.

Just then, Mom walks out. I’m getting ready to wash my hands of the entire thing, should she notice what the dog is eating. I figure I’ll just blame the dog and that will be that.

But then her son follows her out of the house, and he’s holding the doomed loaf of remaining pane.

“Here!” says Mom, taking the loaf from her son and handing it to me. “We bought too much. You take this.”

So at least no one had to discover that the end of the loaf was missing. But now I kinda regret giving the extra chunk to the dog. Pane’s good. Oh well. 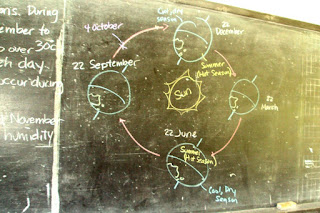 We talked about the seasons in my 9.2 science class today. Notice my crappy rendering of Australia and New Zealand on each globe.

Labels: Out and About