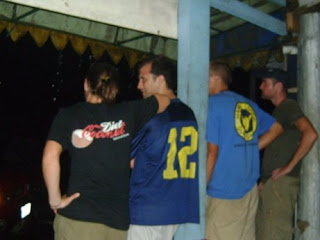 At eCivis and at CNET, I loved gossip. I would sit with friends at lunch and compare notes on the goings on of corporate life. At lunchtime here, I sit with teachers and do algebra, occasionally finding interesting topics of conversation that take up 2 minutes max. Cultural and lingual barriers almost entirely inhibit gossip. I’m usually have to ask the person next to me what announcements were given out that day, and then I usually get a disproportionally brief response. There might be a half-hour conversation between the pule and other staff members, and then I’ll ask the teacher next to me what was said, and I’ll get an answer like, “Oh. There’s no sixth period classes today.”

When it comes to the Peace Corps, it’s difficult to know what’s considered news and what’s considered gossip. We’re so isolated from the world and from each other, we often have a lot to catch up on when we come in from the cold. Koa called me on Friday night around 10:00 p.m. to invite me out, and that was the first that I’d had any real conversation with Peace Corps volunteers in 2 weeks (except for a couple hours I spent with Jordan last Wednesday. He was just back from a week in Australia, so he didn’t have all that much Peace Corps Samoa news anyway.). My point is, a lot happens in 2 weeks; it’s a long time to be out of the loop.

For one, I had no idea it was Briony’s birthday and consequently there were many people in town. I also just learned Michael from group 79 left to go back to The States about a month ago. Craig and Allison, two ex-pats who have befriended many Peace Corps here are also leaving to back to The States next weekend. I heard about some volunteers from group 78 (which is scheduled to go home soon) who have opted to extend a year, one will stay in Samoa and the other is doing a year in China. Oh! And the group 81 Early Service Conference will take place at beach fales rather than in Apia.

Most of this stuff doesn’t affect me too much, but then, we’re all so isolated that none of us are directly affected by any of this news in our day-to-day lives. But much of it is legit news that all of us should be aware of, if for no other reason than to have an accurate idea of what’s going on with the 40 or so others who are in the same position as me.

And that’s why the line between sharing news and sharing gossip gets a little grey. On one hand, there’s a lot of stuff that people should simply be aware of; on the other hand, it’s rare to have much privacy here, and keeping information discreet becomes even more important. And when you’re talking to someone you haven’t talked to in 2 weeks or a month or 2 months, it’s difficult to know where to draw lines.

I’m not trying to justify the telling of other people’s secrets. I’m just saying occasionally conversations start out as news and work themselves into sketchy territory. Or people get overly cautious and omit what is essentially harmless news from conversation.

I suppose this is how news and gossip work everywhere, but I feel like the tension between the two is elevated in this environment. It sucks to hear Michael left a month after the fact, but it also sucks to have everyone on the island up in your business, particularly when we already lead high-profile lives. It’s difficult to walk to the local faleoloa without being questioned about you’re going by two or three Samoans.

So life is a tough balance of being under-informed or knowing too much, of managing your own flow of information. 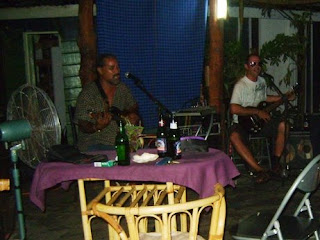 Music at the Zodiac last night. 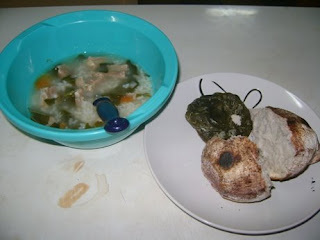 One of my neighbors brought me to'ona'i this morning; that is, traditional Sunday brunch. Soup in the bowl, taro and palusami on the plate. Palusami is coconut cream wrapped in a taro leaf. 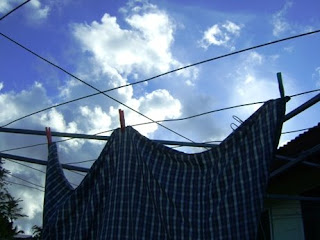 The sky above my drying laundry. Sorry... I've just been really impressed with the sky lately.
Posted by Matthew at 9:03 PM

Congrats. Matt! You're the "Peace Corps Volunteer Blog of the Day" on the National Peace Corps Association's Twitter Feed (http://twitter.com/pcorpsconnect).

When you have a chance, check out our new website at http://www.peacecorpsconnect.org and sign onto the social networking area, Connected Peace Corps. It's a great way to interact with members of the Peace Corps Community. Family and friends of Peace Corps are welcome too!

I am LOVING the sky pictures! Was that coconut thing good?