Too Cool of a CAT 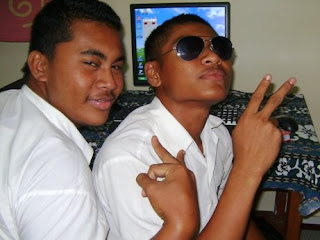 During one of my jobs between college and Samoa, I had to train a guy who was taking who was taking over my old duties. This guy, let’s call him “Andrew,” was, in the parlance of Seinfeld, a mimbo. Andrew had a modeling career on the side, and wasn’t quite adept at functioning at a traditional desk job. Though he had grown up in The States and had worked with computers all his life, he could not wrap his head around the software we used. He would get himself all tied up in bizarre situations that baffled his computer. I would leave him alone for a couple hours, and he would create surprisingly huge messes. The joke was that Andrew would call me over and look at me with sad eyes and mutter, “I pooped on my keyboard.”

Today was the first Computer Studies Common Assessment Test (CAT) of the 2009 school year in Samoa, and my class did a fair amount of keyboard pooping, but these kids have had far less time in front of computers, so I’m not sweating it. Today’s test focused on file management; that is, saving to a particular folder, creating new folders, copying and moving files, saving the same file with a different name, etc. It seems easy enough, and in practice runs, my kids have done pretty well. But the Ministry of Education, Sports and Culture tends to be very particular about how tests should be administered, and I think it brought on jitters.

It didn’t help that our school was forgotten this morning. In order to ensure that no students had an unfair advantage, MESC delivered the CAT to every secondary school in the country seating the exam this morning. But by interval, ours hadn’t arrived, and we were unable to reach MESC on the phone. Luckily, the MESC headquarters are literally around the corner from my school, so my pule and I hopped in the school van and headed over.

We were able to get the test, and my first group of students was able to start the test around 11:30. As I said before, MESC is particular about test administration, and so I had to divide my class into 2 groups so that they could sit one to a computer. As soon as they finished the exam, I was to immediately start the second group so as to allow no time for communication between the groups. The whole thing starts to feel a little bizarre and official, and late start didn’t ease the tension.

Students faired okay for the most part. Language on the test confused them. For example, the test asked students to create a file and save it “under the Subjects folder.” I had students saving a file so the icon was appeared below the Subjects folder on the screen, so we had to go over how “under” in this instance means “inside.”

Others had problems when the test asked them to “replace” a word in a text file with a different word. I actually found this wording awkward and had to read the question a couple times before I understood what it was asking. A bunch of the students attempted using the Replace feature on the Edit menu, which may have been able to get the job done, but was a roundabout way of doing it and made the task more difficult than it needed to be.

And then there were the students that you just have to feel sorry for. One raised his hand because he got an error message on his screen, which turned out to be Microsoft Encarta refusing to open. For whatever reason, he had started double-clicking on every shortcut on the desktop. I had to close the factory printer application, the security program, the CD burner. Another student had opened a inexplicably large number of Notepad windows. I was annoyed when I was unable to close one, and I realized it was closing—the kid had opened so many that I had to close 15 or 20 windows that were stacked on top of one another.

Lessons for next time:
So it was kind of a rough day, but a learning experience for all of us, I guess.

I hope you’re rolling with the punches. Pictures below. 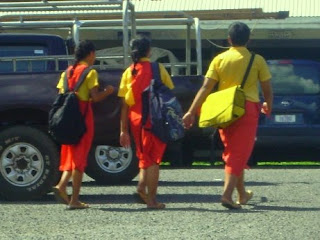 The Samoa College uniforms. Samoa College may be the most prestigious public school in the country, and I appreciate that the student uniforms are ummm... McHumbling. 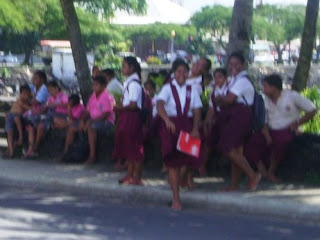 Okay. The only uniforms that might be worse are the ones the boys are wearing on the left side of this picture. They are not a harmless pastel pink. It's very nearly an 80s hot pink. Ouch. 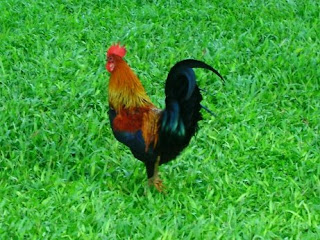 Sorry I post so many rooster pictures. They are all over the place and they are ungodly noisy in the morning. They are also quite skittish about having their picture taken, and when I can get close enough to snap a good one, I feel like taking a victory lap.

I like the hot pink! I think it looks nice.

i have a polo shirt in that hot pink. don't mock, matt.

Pink, that is that school on the way to Moamoa