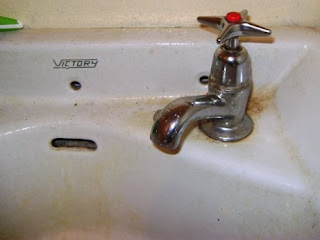 As I understand it, rainwater has a tendency to make the reservoirs overflow, which causes the banks of the reservoir to erode bringing excess levels of dirt and mud into the water supply. In the past, this made tap water arrive with a nasty brown tint to it, and its drinkability fell to a lower state than normal. Now, rather than having the tap water showing up muddy, the water department just turns the tap water off. Counterintuitively, rain makes water less available in the short term.

Of course, there’s no warning. The water departments signal that they’re turning off the water is when you turn on the faucet and no water comes out. I most often use tap water when I wash my hands after using the restroom; though this is a less than ideal time to learn there’s no water to wash with, the situation is inevitable and not really worth avoiding. But it is indicative of the kind of headaches that go along with not having tap water.

At any given time, I tend to have between 1 and 4.5 litres of filtered water in my refrigerator, so drinking-wise, I’m not affected. And that gives me a false sense of security. “I don’t need you tap water. I can’t drink you straight anyway. I have reserves stores up. Ha!” The rude awakening doesn’t come until I mindlessly go to wash my hands. Or wash the dishes. Or shower. Or brush my teeth.

As I’ve said before, other volunteers do have it worse than I. Ryan’s village had their tap water turned off for over 2 weeks in early March. Erik, who only lives across town, told me today that his water has been off for the last 2 days straight. In the host village, my family’s tap water was so inconsistent there was no on and off spigot for the faucet. It was always on. So when the tap actually started, it would quickly become obvious. The always had a basin under the nozzle they used to refill the large barrels of water for the toilet, shower, and communal drinking water. It was a system setup to retain as much water as possible until the next time the tap brought water. So my situation isn’t as dire as others.

But anyway, on Thursday night I had peanut butter and jelly, but I didn’t immediately wash the cutting board or the knife, and when I walked by the kitchen a couple hours later, ants had come to share my leftovers. I tossed the cutting board in the sink and turned on the faucet and—oh right. There was no tap water, which meant no good way to wage battle on the ants. I left the room and chose not to think about it.

It did inform my dinner plans last night though. On rainy days, the water company usually shuts the water off slightly later in the evening; say around 10 o’clock. Last night, the tap was dead at 5:30. Plans for dinner centered on what would have the least amount of scraps involved in order to minimize ants. Grilled cheese is unpopular with the ants in my house, but I had no cheese. I considered peanut butter and jelly, but that was a disaster last time. Boiling up some taro would not have attracted any ants, but boiling taro involves boiling, which involves tap water. Ugh.

I considered a dinner of fruit, but eating an apple leaves a core, an orange, a peel; both cherished menu items for my ants. Even if I disposed of the rinds outside, juice residue would remain on the cutting board and the knife.

It was early enough that I could have walked to town to go out for dinner. But this would have involved slogging a half-mile through rain and mud in each direction, and there would have been no shower when I got home.

In the end, I decided to forego dinner last night. I figure it’s Lent. Why not? Riiiight?

I hope you’re showering when you have the opportunity. Pictures below. 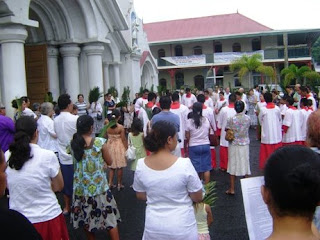 Blessing of the palms at Palm Sunday mass. 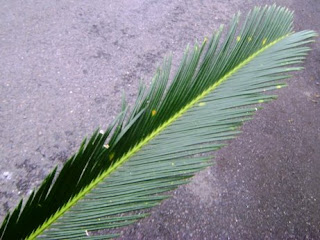 My palm. I liked it because I was hoping that a place with so many palm trees would have cooler palms to hand out, and they totally came through. That said, there's no way to use this one for palm origami that used to be so popular at St. Anne's. 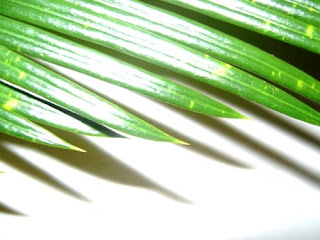 One other drawback: these palms stab. Look at the talons on this thing. 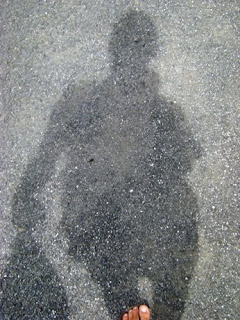 For a couple hours today, the sun shined strongly enough through the clouds that I cast a shadow. I think it gave my body enough time to fill its vitamin D deficit and hopefully shake the Seasonal Affectiveness Disorder. As I am publishing this post, the sky has become completely overcast once more.

Well I hope your water gets turned on soon. Maybe you should start collecting an extra bucket (is the rainwater okay?) for rinsing utensils. Or you could Bear Grylls it and try to figure a way to filter the mud out.

Liked the palm pictures. I came early to my church but there were only like 5 palms left. I figured they were rationing and let everyone else have one. Samoa's palms are definitely way cooler.

Why not use an ants' spray, it works to spray the outside of the whole house... love the pictures of the palms... I quess that's the catholic church in Mulivai apia aye.

Have a good easter break...

Hmmm, very interesting how I'm reading this on Palm Sunday of 2010.

have you ever tried storing rain water for times like this...in pop bottles or another kind of plastic bottle...once boiled, it could potentially be okay for brushing, or other necessities...perhaps you figured this out by now...I'm a year behind in your blog!! ;) GREAT reading!!