Mississippi, I Remember You 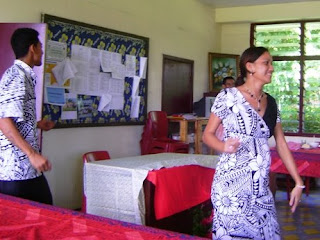 In the movie “Rushmore,” Director Wes Anderson uses slow motion to emphasize particular scenes that, for lack of a better term, have a kind of “How in the hell did we get to be here?” aspect to them. There’s one where Max walks out with a bandaged bloody nose to the curtain call at the end of his theatric adaptation of “Serpico.” Another happens when he is walking down the hall of a hotel dressed as a steward with a beekeeper’s mask. There’s a surreal mood to it, and the soundtrack is played up for emphasis. I had one of those moments just now.

Yesterday my pule drove me to the Ministry of Education, Sports, and Culture to drop off the results of my year 12s’ CAT they took last week. On the way back to school, he goes, “So we’re having lunch tomorrow!” I’d heard it was lunch for the old P.E. teacher. But he said, “No. We’re celebrating [school secretary] Faalau’s wedding!”

So I showed up for school this morning ready to teach my 11.3 class 2nd period*, at peace with the fact that the rest of my classes would be canceled on account of the fiafia at lunchtime. The other computer teacher was in a pissy mood this morning. The first thing she said when she walked into the classroom this morning was, “You know what I learned about teachers at this school? They’re backstabbers.” Wowa.

As it turned out, there were many teachers who had no such dish, and a group of them were heading to town soon. So I hopped in a car, and we headed to Pinati’s, which I’ve talked about on the blog before, and ordered a bunch of plates of food. When I say plates, I mean it literally; we showed up with our own plates, and they put the food on those and then determined how much to charge us.

We came back and the fiafia started around noon. There were the usual formalities with the bride and groom sitting together and a big presentation of the monetary gift on behalf of all the staff. Things started to become abnormal when the school librarian came around with a large platter full of glasses of red and white wine.

Don’t get me wrong. I love wine. But I’m a little hesitant here. Particularly surrounded by school staff.

But then everyone took a glass. And, sure, if everyone jumped off a bridge, I also would have been hesitant. But when in Rome, do as the Romans. So if the Romans are jumping off bridges, then what?

I took a glass of red. We ate, and there was dancing. And then Saleupolu to my left and Ulia to my right peer pressured me into dancing with Faalau, the bride. They did this by talking loud enough that Faalau got all excited and pulled me out.

Later, the art teacher came around with a huge tray of beer. And I look, and my pule has a beer and the faifeao on staff has a beer and pretty much all the other men in the room have a beer plus many of the women. So, what the hell? I had a beer.

The DJ played a song that the room is clearly excited to here, and many people, most of the room, sang along. The music swells. “Mississippi, I remember you,” sings a distinctly female Samoan over synthesized music. It’s a Samoan cover of a Barbara Fairchild song. People are swaying. Ulia, next to me, is watching a video of me dancing the school librarian recorded. Samoan Barack Obama rules the dance floor. Students are throwing me thumbs up from the kitchen. “Now the country song forever lost its soul,” sings the room.

I had only had a glass of wine and a little bit of beer at that point, but there was a brief moment of slow motion for emphasis when the music got louder, and my brain asked, “How in the hell did we get to be here?”

I hope you haven’t lost your soul. Pictures below. 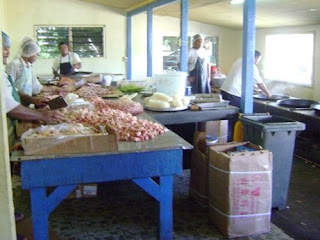 We entered Pinati's through the back, so we got to see these huge tables full of carved meat. The guy in the far back is wrestling with a large fish. Hard to see here. Sorry. 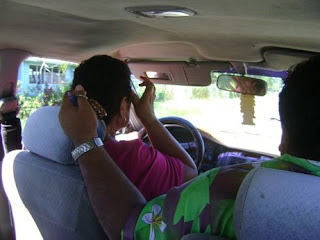 In the car with Ulia and Tevaga. Tavita, the so-called Samoan Barack Obama is sitting next to me, just out of the picture. 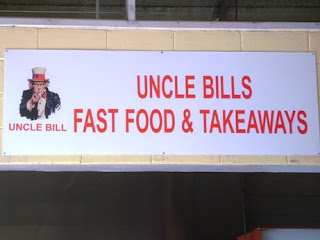 The snack bar outside Farmer Joe is now called "Uncle Bills". The weirdest part is the picture of Uncle Sam with a Samoan flag on his hat and labeled "Uncle Bill". Strange. 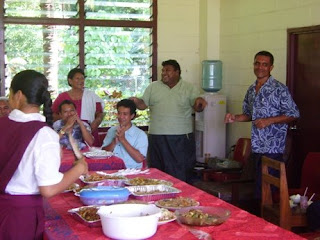 Dancing at the fiafia. That's Samoan Barack Obama on the right. 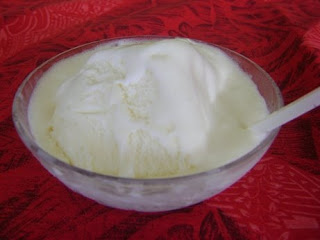 On "Wait Wait!" this past week, they did a thing about soft-serve ice cream. All ice cream is soft-serve in Samoa because it is too hot and humid for it to last any amount of time without getting soft.