Should I Get a Dog? 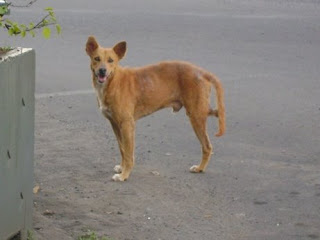 I am thinking about getting a dog. I’ve wanted to get a dog since I got out of college, but I couldn’t because I lived in apartments that had rules against owning pets. Also, my Pasadena apartment was little more than a glorified shoe box, and it wouldn’t have been proper to keep an animal there anyway. San Francisco is one of the most pet-friendly places in the world with more dog parks than human parks, but our building manager was having none of that.

But my situation right now seems more ideal than ever. My front yard is a huge lawn. I work 30 seconds away. I only teach 4 classes a day, so it’s not like I keep long hours at the office. It seems like there won’t be a more perfect time to get a dog.

That said, I see quite a few problems with the situation. First, I leave for a night or two occasionally. I go back to the host village or I head to Savai’i. And what happens to the dog then? I could bring him to the village, but I think the dogs there would eat him. That would also mean getting a ride from someone besides the bus. Dogs aren’t allowed on the bus.

Another problem is the parts of my house most suited for letting the dog “nest,” the bathroom or the kitchen, are also the warmest parts of the house. It seems questionable to keep a fur-covered animal in either of those places for very long.

All of these problems emanate from the fact that if I were to get a dog, it would be an inside dog rather than an outside dog. This is not typical of the Samoan lifestyle, but it’s not unheard of.

In fact, I spoke to Hannah from group 79 about the issue (she is a vet), and her first question was, “Is this going to be an inside dog or an outside dog?” This question leads to the larger issue of “What do you plan on doing with the dog when you’re done with your service?”

There are 3 basic options for this. First is leaving the pet with a Samoan family. This is a cute idea, but also slightly impractical. The second option is to leave the dog with another Peace Corps. In the past, pets have been passed from volunteer to volunteer, and that works tentatively well. The third option is to bring the dog with me back to The States when I’m done. This option seems most ideal, but it also means that the dog needs to be prepared for life in The States, which makes raising the dog as an inside dog better in the long run.

Phil’s advice was also practical. “You have to train it to be afraid when people throw rocks. And you have to make sure that it can defend itself against other dogs. Maybe you could socialize it with the other dogs that live on your compound.”

Some good points there. I do think the most awkward part of the situation would be taking the dog for a walk. People don’t typically keep dogs on leashes here, and it would be an odd sight to see, let alone to be a part of. And I don’t really care about people staring, but I would be nervous about bringing my prissy inside dog near the angry feral dogs that live on the streets of Apia.

During training, Dan and I had a conversation about what a domesticated dog and a feral Samoan dog would say to one another.

So the jury’s still out.

I hope you’re finding companionship. Pictures from the village below. 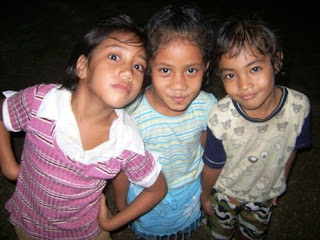 Three girls outside the siva on Friday night. 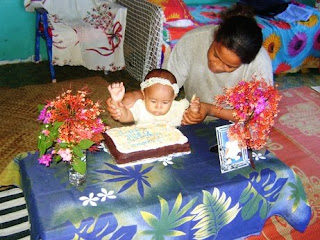 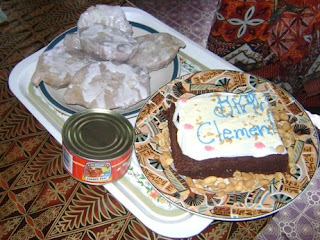 This is the food we brought to the Faifeao's house. Keep in mind that the Faifeao was at the party, but this is the obligatory tithing.

Awww these pictures are precious!! Thanks for the birthday wish. Miss you lots. Thanks for calling today!!