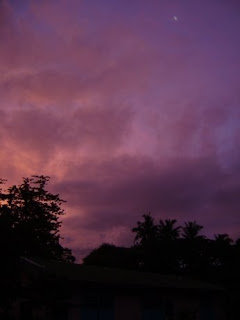 With no teaching responsibilities and minimal proctoring responsibilities, this week has been light on the workload front, which has been a bit deceptive. Though there’s been no lesson planning to do, I got 165 year 11 exams to correct, and tomorrow I’ll have 30 more from the 12s and 13s. My parents are also coming in next week. And a bunch of volunteers are getting together on Savai’i on Saturday. So it feels slow, but really it’s all kinds of busy. Here are some other odds and ends from the week:That’s all I got. I hope you’re well. Pictures below. 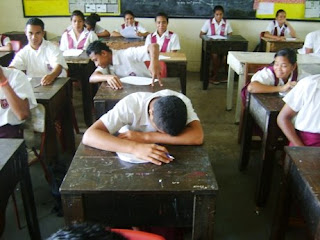 This kid is sleeping while the others take the science exam. So I took his picture. I like this picture a lot. 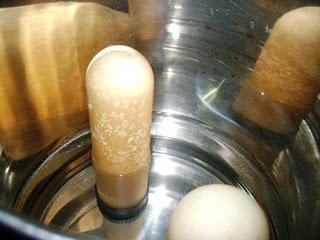 Two people have asked recently about my water purifier. My water purifier is essentially an über-Brita. I pour water in the top, add a couple drops of bleach, and wait for it to seep through. These are the two filters pictures here. The bleach is necessary to prevent the living things that get filtered from setting up home in the top of the filter. I like that image... The bacteria hanging Bob Marley posters on the wall, inviting other bacteria over for parties. Bleach it is.
Posted by Matthew at 6:42 PM

The Arlen Specter thing was quite the turn of events. Some people claimed they saw it coming, since he was always such a moderate, but that's BS - switching parties is not normal. Sadly, though, the real reason is that he's screwed in his GOP primary this year, and he couldn't pull a Lieberman and go independent if he lost (the "sore loser" clause in PA that prevents a losing primary candidate from appearing on the general election ballot). But hey, even if it's Dem by name, so be it.

LOL! I think that kid didn't sleep last night just to review for the exam. Too bad, he'd slept on the exam.
Hmm, I've heard my friend complaining about algae growing on her water filter. I think she needs to pour some bleach on it prevent algae formation.