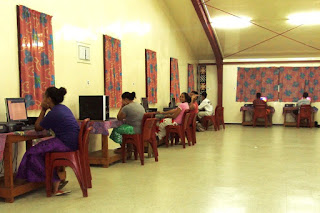 It’s 10:35 p.m., and I’m sitting in the computer lab listening to a barrage of Rhianna, Justin Bieber, and Glee. All the year 13 students are camping here on campus for the next two weeks in order to cram for the Congregationalist school common exams in early October. For the next 2 weeks I’ll be teaching an extra 75-minute period Monday through Thursday. Yup. Year 13 Camp is on once more, and I’ve decide to embrace the teeny-bopper music aspect.

It’s true: I’m probably more in tune with that feeling because my year 13s’ end is my end too. Let’s not dwell too much on this.

Camp is exciting. Everything about it seems new. Some things feel like breaking the rules: the students wear street clothes rather than uniforms, I wear shorts and a t-shirt rather than my typical Hawaiian shirt and ’ie faitaga. It feels like rules are being broken; like we’ve gone behind the scenes a little. I went running tonight, and I admit I thought a little more about walking past everyone to get off campus. They’re going to see me go running, I thought. That’s weird.

It’s the other side of that teacher mystique. I remember thinking it bizarre to imagine my teachers going home and performing menial tasks. Buying groceries, washing the car on Saturday, feeding the dog. Weird.

But now, as I said, I’m on the other side. I can’t have students know that I go running. Or that I occasionally wear the same t-shirt 3 days in a row. Or that I can’t help singing along to “Don’t Stop Believing” in my own terrible, shrill voice. Oh well.

I’m not wholly convinced that Camp makes much of a difference in the kids’ performance on the tests. Right now I can hear several playing Mavis Beacon and two looking at pictures from someone’s flash drive and giggling. But it’s hard to believe the alternative is better necessarily.

Staying at home has its own distractions with feaus and TV and little brothers and sisters to look after. At least staying here offers a quiet place to study. Provided you’re not in earshot of whichever Beyoncé song is on right now.

Although tonight is the first night, which means everyone’s going to stay up until at least 3 o’clock in the morning, and then show up to my class exhausted tomorrow. 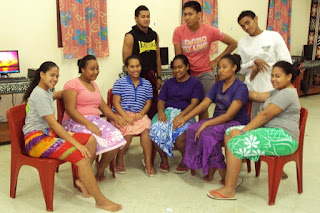 My year 13s wanted to take a class photo after tonight's session. I really like this picture. I almost printed it tonight.

Okay. So these next photos are so creepy, I've decided to link to them rather than display them. If you want to take a peek, you're going to have to click. That way I'm not to blame. Proceed with caution.

Last night before I went to meet up with some guys at the movies, I went to use the bathroom before I left, and I noticed the floor in front of my shower was covered in ants. Covered. I'm estimating well over 20,000 ants. I sprayed them with Mortein and headed to the movies to clean up the mess later.

This is the carnage 24 hours after the fact. The edges of the floor are still dense with ants.

This is a slightly closer view of that density.

The pile of ant cadavers after sweeping. My estimate of >20,000 ants comes from the size of this pile. Gross.
Posted by Matthew at 11:00 PM