No One Noticed Today Was Daylight Savings 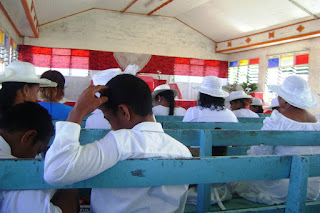 All over Samoa, people woke up this morning before dawn whether from roosters crowing or their bodies’ internal clocks waking them. Most Samoans moved through their Sunday morning routine: the younger children collected rubbish from around the yard, the older kids made the saka (the fire for boiling breakfast), the women ironed the families’ church clothes while the men prepared the umu for to’ona’i, the big after-church Sunday brunch.

Sometime after the sun rose, someone rang the bells to inform the village church was about to start. The people hurriedly put on their Sunday whites, slicked back their hair, dawned their hats, grabbed their bibles and fans, and set off for church. Choirs sang, faife’aus prayed and gave sermons, the list of names and monetary contributions was read. Afterwards people stood around to chat for a while, but not for too long since to’ona’i was waiting at home.

Was it ever. There was pork, chicken, and taro that had been cooked in the umu; fresh oka; bananas topped with coconut cream; fried fish from last night’s catch; papaya and mangoes; and kokolaisa. After finishing their niu, the women washed the dishes while the men fed the table scraps to the dogs.

After such meals, most people experienced a post-prannial energy shunt, changed out of their Sunday whites into a more airy t-shirt and ’ie outfit and went to lay in the faleo’o and nap. Even the animals seem to get into the spirit of aso mālōlō, the day of rest. The cats and dogs napped along with their masters.

Sometime late in the afternoon in most villages in Samoa, someone rang the church bells once more to let people across the village know it was time to come back for afternoon services. As usual in most places, afternoon services were more lax and low-key. Many faife’aus made a few jokes. The choir sang some more, and then church was over.

Late Sunday afternoons are a relaxed affair, and as the sun starts to droop in the west and the temperature eases into the mid-twenties (Celsius), it’s a nice time for a quiet stroll around the village. Many people are out and about moving slowly, enjoying the breeze.

Once the sun set, most families in Samoa sang and prayed together, and then pass the evening quietly. Some watched whatever movie was showing on TV1. Some of the older boys in many villages brought out their guitars and sat with friends on the graves of their ancestors strumming nothing in particular. Most students prepared their uniforms for tomorrow, and some may have actually finished their homework.

And then, after most babies got groggy and the kids passed out, the adults felt sleep overcome them as well, and the lights were turned out.

People were supposed to move their clocks forward an hour at midnight this morning. But really, how would that have changed anything about today for most of Samoa? And how many students and teachers show up an hour late to school tomorrow? I guess we’ll see. 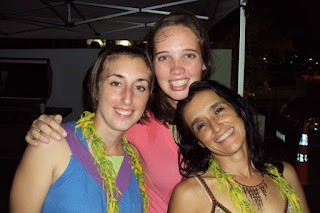 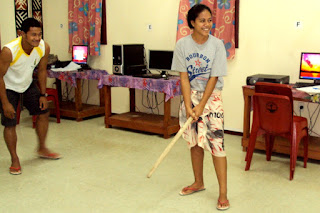 We played baseball Thursday night at the end of my computer class. That's Lise with the "bat" and Luuao playing catcher.
Posted by Matthew at 8:00 PM

I vote for this as one of my fav. posts. Well painted.

what a perfect Sunday..