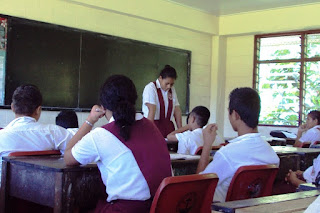 I walked into sixth period whistling. Often at that point in the day, particularly on dreaded Tuesdays, I’m down-trodden and grumpy, but not today. And during sixth period, I had one of those fleeting moments where I was enjoying myself so much I briefly thought it would be fun to be a chemistry teacher. Now that the clouds of cynicism have drifted back in, teaching chemistry sounds absurd. But today sets the tone for my final school term, that wouldn’t be such a bad thing.

Okay, so I half-assed my double-period with the year 13s this morning. I got them started in Microsoft Publisher—one of two units we have left before cramming for their final exam—and then sat down at my laptop to work on the magazine. In spite of yesterday’s post, I realized today I’m actually having a pleasant time working on it. It’s an outlet for creativity and obsession, and I thrive under those conditions. At points I zone out and the perfectionism takes over. I wake up 4 hours later, and very little has been accomplished, but the pictures on every single page are exactly flush with one another.

Educationally, it was not my high-point with the year 13s today, but it’s Publisher. It teaches itself.

Ever since the second half of COS last week, the weather has been terrible. But in a good way. We probably got 4 inches of rain during school hours today, no exaggeration. It’s a welcome respite from the heat. Cold-ish rain and gusting wind are a rare treat, and sitting at the staff room at Interval, a lethargy set over the staff, and I was fine with that.

I’ve decided I’m going to sing with my year 10 English class as much as I can this last term. It’s what they seem to like doing the most, and it’s what I enjoy teaching the most. Today I started them on Simon and Garfunkel’s "At the Zoo". Truth be told, the lyrics aren’t entirely appropriate. I haven’t decided what to do about "And the zookeeper is very fond of rum" or "Hamsters turn on frequently", but I’m not all that worried. I can gloss over it quickly, and who uses the phrase "turn on" anymore anyway? In any case, we only had time for the chorus and the first verse today.

And that’s why I walked into 9.2 science whistling. I was on a high (turned on?), and the kids seemed to respond. I was pleasantly surprised when many of them had done their homework, particularly since my assignment was somewhat impossible. They were supposed to find the chemical symbol for a bunch of different metals, but they have neither textbook nor even a photocopied periodic table to work from. But somehow they figured it out.

First day back wasn’t so bad.

i still believe your future would be happier in architecture vs. law school! Creativity, ingenuity, perfectionism, culture, philosophy...just some more of my rambling thoughts to someone i don't really know! LOL but hey! I'm half-Samoan...it's in my blood to mind some of your business! ;)