Pets Are So Fun 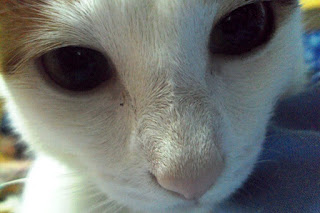 I have a cat hair in my mouth. I haven’t been licking the cat; I think I inhaled it just now while I was laying on the couch. It’s stuck at the back of my throat, and I’m having trouble getting it out. I’ve had the cat for 11 months now, and she’s come to be a fixture in my Peace Corps experience. After spending the first year of my service alone in my house, it’s been quite pleasant having a companion to come home to. But she is a mess. And cleaning up after her is no easy task; particularly in the developing world.

Hair is a problem. With the heat and humidity so constant in this climate, Scout is a shedding machine. Even in these relatively cool months, I’ll pick her up for just a moment and immediately have 20 hairs stuck to my shirt. I remember having pet hair problems back in The States, which we commonly remedied using the vacuum cleaner or the Dustbuster. But here, I don’t have a vacuum. So I sweep. And I tend to wear shirts with a sprinkle of cat hair.

Going through the kitten phase has also been fun because she’s been an avid shredder. Neither my toilet paper nor my paper towels are mounted on the wall, and for a while there she was particularly skilled at finding whichever roll of paper, knocking it to the floor, and tearing it to shreds. Such paper products are not cheap in these parts, and it’s been really fun budgeting extra rations.

Then there’s the smattering of bodies the small-time-but-accomplished huntress leaves in her wake, which is almost fully comprised of geckos. She’ll bat at the occasional moth, and she likes nothing more than finding a dead cockroach to play with, but lizards are the only real kills for which she can take credit.

With her ever-improving jumping abilities, surfaces that used to be safe have become embattled territory. And since I have no cupboard doors, those shelves have been fair game almost since the beginning. I’ve had to resort to keeping dishes in Tupperware to keep the cat away from them.

I’m sure there will be some adjustment pains once we get back to America, but I’m optimistic that a place where vacuum bags, spray bottles, lint brushes, kitty litter, and wall-mounted paper rolls are readily available, cat maintenance will be easier.

I’m going to go clear my throat. I hope you’re well. Pictures below. 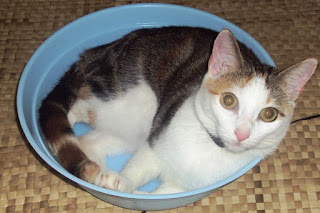 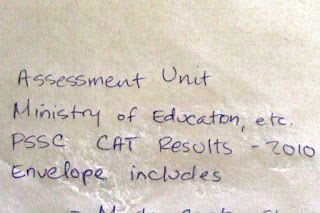 I'm such a rebel. I turned in my Common Assessment Test scores to the Ministry of Education, Sports & Culture, but I abbreviated the Ministry's name. Quite the statement, right?
Posted by Matthew at 11:00 PM