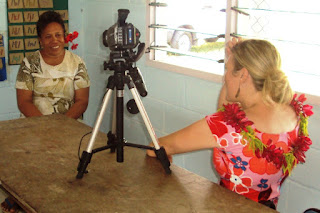 Leah still wanted me to bring doughnuts at 7:57 this morning. Since we were scheduled to truck down to her village first thing this morning, she wanted us to bring two dozen doughnuts from Gregg’s Bakery in town to share with her staff, and I figured Peace Corps staff would be cool with making a pit stop before we left town. But then 19 minutes later before Peace Corps staff ever arrived, Leah called me. “I think we have a problem,” she said. Ho, boy, Leah. You don’t even know.

As I’ve mentioned on the blog before, I’ve been charged with videotaping and editing a video on The Art of Co-Teaching for the Peace Corps office here. Theoretically this video would be shown to both incoming groups and to schools where a Peace Corps Volunteer will soon work. Kaelin 82 is spearheading this production; I’m just DP. We went out a couple weeks back during my school break to get footage of a bunch of the 82s leading songs and activities with their kids, and interviewing Principals and students alike.

I have a little experience with digitally editing video, but not too much, so I was a little nervous from the beginning. It hasn’t helped that I can’t get my laptop to acknowledge the camcorder. This morning I finally figured out how to turn on the camcorder’s “USB Flow”, but even then, my laptop crossed its arms and turned a cold shoulder. Vista can be a snooty jerk.

But even that wasn’t the half of it.

I rewound to our old footage from last time to see how much tape we had left for today and set the tape at the right spot. But in the viewfinder’s playback, the screen is barred with a bunch of thick grey lines. Also, the camera’s speaker, which was already had an obnoxious crackle, was mostly silent. This wasn’t how playback looked and sounded two weeks ago.

In my frustration over the USB issue, I downloaded the camcorder’s 300-page manual over hi-speed internet a week or two ago, so I went looking for these grey stripes in the troubleshooting section. The manual diagnoses a dirty video head, and prescribes using the cleaner cassette for a minute or two to clear up the problem. But the Peace Corps doesn’t have a cleaner cassette.

And if the camera can’t play the footage we already shot, I’m severely dubious of its ability to accurately shoot new footage. But none of that mattered this morning because the staff member with whom Leah was going to co-teach was out sick. And he was the back up. The original is out on maternity leave.

AND THEN this afternoon I went to the office to figure this out with the Peace Corps’s Technical Officer, and I was standing at his desk when the acting Training Manager came in to tell me that it’s irrelevant whether Leah’s co-teacher will be back in school tomorrow because no one from the Peace Corps staff is available to drive me down there anyway.

So between missing on-screen talent (and her understudy), a camera with which to shoot said talent, and the transportation to carry the nada-camera to the nada-talent, the project seems a little doomed. I think we have a problem. 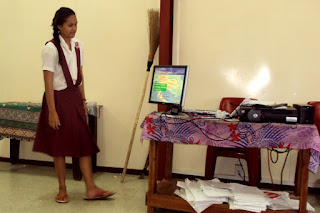 Pelenatete giving a presentation on Thailand. 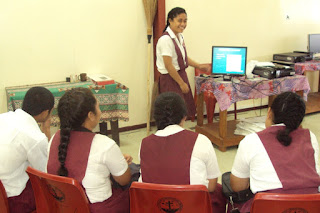 Fautamara giving a presentation on the Philippines.
Posted by Matthew at 11:00 PM