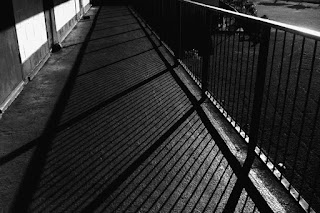 The magazine is almost done, save for a few glaring gaps I have no control over. One teacher has decided to be a stickler about students in his class photo making various benign hand gestures—despite the ubiquity of such hand gestures in the rest of the magazine. Another decided too many of her students were absent the first time we took the class portrait, so she also wants a re-take. And the head of each department is supposed to submit a report; I’ve received one so far: my own.

Before the break I hand-picked my own student yearbook committee and tasked each student with one article per person. From my calculation, there were 9 articles to be written, and I chose 9 students from years 12 and 13, each of whom:
I asked one of the biology students, Sera, to write about the biology field trip; I asked Rubgy player James to write about the rugby season; I asked year 12 Sam to write about English Day; etc. I assigned the articles, and since most of the school is quietly anticipating the magazine, my prospective committee members were all eager beavers.

I gave them a 2-day deadline, which made them all grimace slightly, but most handed it in no problem. Sure, there were a couple of stragglers, but I’d chosen my team carefully, and many were participating in the Tahitian-hosting over the break. So there was ample time to badger them about the article.

But Tauinaola is a special kind of straggler.

So because of this, I’ve been a little more persistent with her. Every time I’ve seen her since I gave her the assignment, I’ve asked for it, and every time she’s told me she’d give it to me the next day. Whatever.

This morning Tauinaola is about 4 weeks late with getting her article in, and since I can do little else for the magazine at this point, I decided to track her down this morning. During my free period, I headed toward the 12.1 classroom.

Compared to my high school, my school here is pretty small. It’s pretty much one long building, so it’s just a matter of finding out where someone probably is, and making sure you don’t run into him/her before you get there.

As luck would have it, Tauinaola came to the top of the stairs at the end of the year 12 wing when I was about 20 yards behind. She turned in the direction opposite me, and started walking at a quick pace. I assume she’d been sent on an errand of some kind that she was returning from.

She walked with purpose, and even though I quickened my own gait, I could not catch her. She briefly swung her head to the side to look out at the field, and I thought for a second she saw me out of the corner of her eye, but her expression didn’t change if she did.

I could have called out to her, but there were a lot of people around, and singling a student out—particularly a female student—is a little taboo. 12.1 is at the end of the bloc, and I figured I’d catch her there.

But she kept going. She passed 12.1 and went down the stairs at the end of the building without slowing. There was a boy at the top of the stairs, who I didn’t know, who said something to her, and then chuckled at her reaction. When he turned to face me, he desperately tried to hide his smile, and I immediately knew what was going on.

Despite the broad daylight, the whole situation had a noir-ish feel. Her over-the-shoulder glance, the quickness in her step, the cryptic smirk of the kid at the top of the stairs. I’ve read enough detective novels. I put the clues together.

So I wasn’t surprised when she wasn’t on the stairs when I rounded the corner; nor when I reached the bottom of the stairs, looked both ways, and didn’t see her in either direction.

But I got Sam Spade skills. As it turns out, I am a master at Hide and Seek. I have a wealth of experience in the game, and I’m as good a hider as anyone. But there are two sides to the game, and as good as I am at hiding, I’m terribly good at seeking.

I crept slightly around the bottom of the stairs and saw a pair of feet in Jandals trying desperately to mold to the cement staircase. So I quietly turned around and snuck around in the other direction.

At this point, the absurdity of the situation hit me. “Are you seriously hiding from me?” I couldn’t help laughing.

She burst into giggles.

Long story short: she didn’t have the article. Maybe tomorrow. Either that or she’d better look for a better hiding spot.

Update! The day after the Hide and Seek incident, Tauinaola turned in her article. I think she also though the incident absurd. 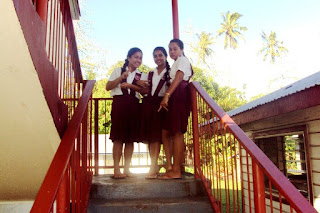 Fautamara on the left, Gasologa on the right, and Tauinaola in the center on the landing of the staircase she would later use for a hiding place.
Posted by Matthew at 11:59 PM

That is the hardest I've laughed all week. Cheers.