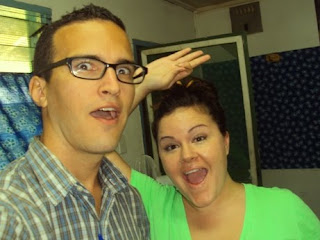 Despite all of the Road Switch warnings, Amanda has spit in the face of danger and come to visit me in Samoa. She is the lone member of my second wave of visitors, which is very exciting. And as a bonus, United had its act together this time around, and she was able to make both legs of her trip. She arrived on time and in one piece, albeit a little tired, at 5:00 a.m. local time

She used some of my parents’ frequent flyer miles to pay for the trip, and due to limited seats in economy class, she flew business class. She got to relax in the VIP lounge at LAX where they had finger foods and a refrigerator full of free soda and beer. She was escorted on to the plane, and as another bonus, she had the entire row to herself.

I found this hilarious. Taking business class to visit a Peace Corps Volunteer is like going upstairs to get to the basement; like taking the penthouse elevator to get to the mail room.

In any case, it seems like they schedule in some buffer time on the flight from Los Angeles because it seems to land 45 to 60 minutes early on a regular basis. Okay, I’m only looking at this week and last week, so my sample size might be too small, but Paul and I were both extremely late in meeting our visitors at the airport though we arrived on time.

Okay, I overslept. But I still made it to the airport at 5:30 for a flight that was scheduled to get in at 5:25. It’s reasonable to assume that baggage claim and customs adds a half-hour to curbside arrival.

I overslept and made it on time because I took a taxi. His name was Lio, and he wanted $40 for a taxi ride to the airport. I had been told by others this is a $50-ride, so I was down for $40. And since Amanda was sitting in the waiting area when I got there, I was able to flag Lio down before he left the tiny airport, and we got a ride back for $40. Sweet.

The drive into Apia from that flight is always pretty amazing. You leave the airport under cover of darkness, and you drive into the sunrise. It’s almost as though you can watch the shades of blue and orange and pink move across the eastern sky.

It’s also a bit mindblowing to see all the pre-dawn activity along the suburban road that connects Faleolo and Apia. I saw at least two students from my school, who I assume must wake up around 5:00 a.m. every day to make it to school on time. And there I am fighting the alarm clock at 7:20.

In any case, we made it back this morning with time to spare before school began. We opened luggage and I tried hook up my SATA hard drive and Amanda took a nap.

On the schedule for the week: beach, boat races, restaurants, road switch fun. 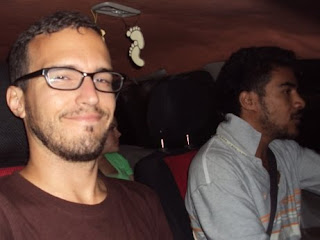 Me and Amanda and Lio the taxi driver. 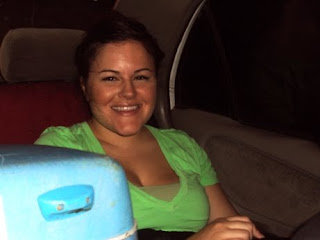 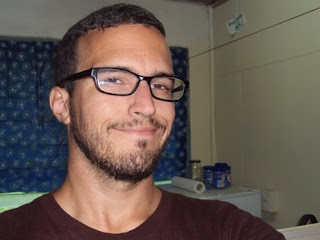 I re-grew the beard after that teacher said shaving made me look like a "little school boy". But I shaved this morning.

I like that little foot thing hanging from the cab roof. Was that foot shaped air freshener? I find that hilarious if it was.

I am happy to hear that Amanda arrived safely. I hope you two have a wondeful visit. Make good choices and don't spit on anybody!

Dude, grow the beard back but trim it every week with clippers for the 5 o'clock shadow look..The teacher was right about your babyface, even Solinuu with his fake tatoo looks older..ha ha.

hope your sister has a good time in Samoa....especially since the Samoan boys are the biggest flirts in the South Pacific....i should know i married one lol

Amanda - Welcome to Samoa! I wish I could be there to meet you! But my one true wish is to be upgraded to business class on my flight back!

Matthew - Thank you for putting up terrible pictures of me after my flight.

Blakey - I'm really bummed that you're not here. I'll keep my fingers crossed that you get bumped up to business class!

did you shave right after you got home from the airport???