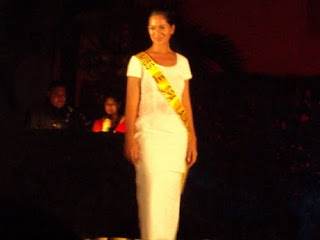 My sister and I attended the Miss Samoa Pageant last night. The theme was “Celebrating the Tamaitai Samoa... humility, elegance, purity.” The show ran a little long—upwards of four hours—other than that it was a good time. It was clearly an event many Samoans hold dear to their heart, and being a spectator was eye-opening. Though the event was a great celebration of the beauty and femininity of Samoan women, I feel like the competition could benefit from a few key improvements.

Before I start, I should note I’m a little queasy about the basic premise of a beauty pageant, but I’m willing to level. One might posit last night’s pageant wasn’t a “beauty pageant” because there was a talent portion and an interview factored into the scoring rubric. Duly noted, but it seems like no coincidence the girl who won “most photogenic” also won the pageant. I think more celebratory aspects of the Tamaitai Samoa might be intelligence, perseverance, compassion, strength, conviction, ingenuity, scholarship, etc. It seems like an oxymoron to take pride in humility, but whatever. We argue the chauvinism of such contests another time. I’m willing to accept the celebratory nature of the event. Let’s move on.

First, it seems unfair to have contestants from The States and New Zealand and Australia competing with girls who’ve spent their whole lives here, especially since the interview portion is conducted in English. I’m not saying anyone’s life is tougher or easier as a result of where they grew up, and it’s nice Samoan women living in other countries are invited to the table. I’m simply saying the language of the interview should be up to the contestant or there should be stricter rules about admitting contestants from abroad. I suggested changing eligibility requirements to only allow girls who’ve spent more than half their life in Samoa. Phil called my rule arbitrary. Good point, Phil.

Second, I think the talent portion should include a required talent section to augment the choose-your-own portion. And the required talent should be something authentic like husking coconuts or plucking a chicken or carrying monster pieces of teak a couple miles or cooking up some kokoesi. The point isn’t to highlight diminutive tasks, but to showcase the true traditional tamaitai experience, right? I think the contestants should have to roll up their pulatasi sleeves and get their hands dirty. Phil asked if a siva Samoa might also be a required talent, and I said that could probably just fall in the choose-your-own. And he said a contestant could simply choose to husk coconuts for her choose-your-own. Another good point, Phil.

Third, we could all benefit from more substantive interview questions and answers. It seems like there are two types of questions that were asked last night:. Both of these yielded oversimplified, idealistic answers that were indistinguishable from contestant to contestant. Instead, let’s make it a panel discussion in which contestants are aware of the topics in advance. They can study up (or be prepped), and then they can have a Bill Maher / McLaughlin Group discussion. There’d be potential for tension and argument and in-fighting. Topics could even be formulated to spark conflict and actual debate. Phil fell asleep.

Maybe I’m just trying to force my American perspective on to things. Or maybe I’m trying to celebrate the intelligent, perseverant, compassionate, strong, innovative, scholarly aspects of the Tamaitai Samoa. 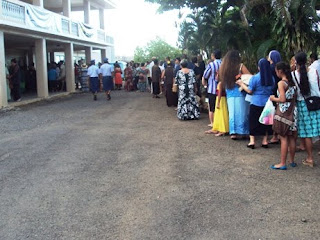 The line to get in last night. 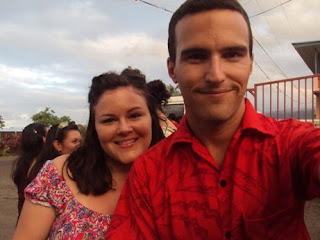 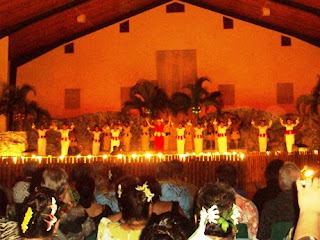 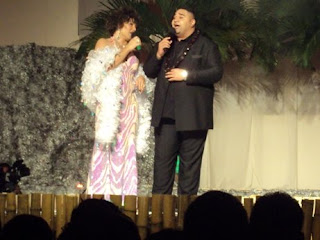 Perhaps the most entertaining part of the evening was when the fafafine above sang the Linda Rondstadt part AND the Bill Medley part of "Somewhere Out There". It was a well-timed reveal, and her man voice was even better than her woman voice. Then she was joined by the man above for the build up part at the end where the two parts harmonize. 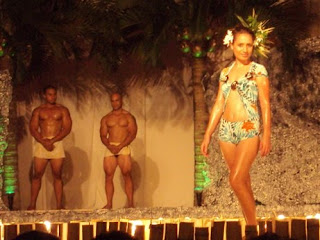 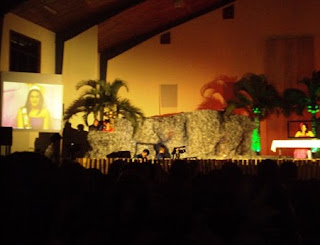 Contestant #1, Miss Samoa New Zealand, doing her "news caster" talent in which she interviewed herself via satellite. I thought it was clever. 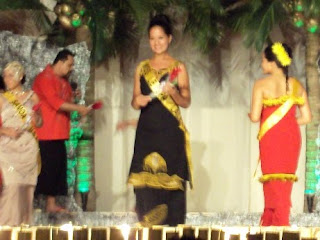 Contestant #4, Jacinta, was the winner. She is very pretty.

Labels: Gender Roles, Out and About

okay - so how is ms mcdonalds sarong ANYTHING even remotely 'tamaitai samoa-ish?!' Granted she looks stunning - but she looks like she stepped out of pages of wild brazilian almost-playboy chicks magazine.

And i agree - defn Cindy's show was a highlight. She ALWAYS steals the show.

Malo Matt!!
well written as your blogs usually are :) i was looking forward to your blog about the Miss Samoa I really wanted to hear what you thought and im not disappointed :) as locals we tend to have a tunnel vision on this so i really enjoyed and reading your view...i like the plucking the chicken idea as a talent i totally agree about what you said about that..i might even suggest it for a pageant in the near future HA! dont worry ill totally reference you :) my family back home is one of the sponsor's for the contestants. In the past the contestants were interviewed in both languages but it changed over time the girls from overseas some can speak Samoan very well but its more to do with the Miss South Pacific and the spoken language being English that it was decided to train the girls to answer their interviews in comprehensible English.
manuia le aso

and of all the talents that night, who might you have thought was the best?

Could not have written it any better. I like what I'm reading and totally agree...the committee could learn a thing or two from you. I mean, well done to the committee for their hardwork putting it together and maing it possible every year and it is a fantastic event but yep u got that right, the pageant needs improvements, just a few adjustments - hahaha. Loving your suggestions!
I'm glad I stumbled by your blog!!!

You have a fabulous day n god bless!

Enjoyed your comments but just one thing...why would it matter if the girls were from the states or other countries running...what samoa needs to do is to run their own samoa pageant first then have their winner run against the other girls from other countries...thats how it should be done.

hey i really like your post about the pageant, but ive been to previous pageants and i think the process works in showcasing samoan women in an unique way... when it comes to the talent portion you have to see that its also an entertainment show where it ends the teuila festival. international samoan entrants never use to attend because the nz-samoans, aus-samoans and usa-samoans use to send direct entries to miss south pacific and there was a complaint put in coz there were too many samoans at the miss south pacific so that changed that process and the international samoans had to be sent over to samoa... but having the international girls go over is a good experience for those girls because they get the chance to see how the real samoan way is different from their experience in their adopted homeland in which they are a minority. By having those girls do the interviews in english is good because samoans are educated in english as well as samoan.. having girls prepare speeches would not be good because its a pageant and a competition that challenges the girls in how good they are in coming up with good answers in pressure situations. i do think that the pageant should have a top 3 after the categories to advance those girls to a final interview to determine who wins... but i really like your post, it was not bias and you gave some good ideas :)

good post. i was surfing to find a viewpoint from someone who was at the pageant because the dvd we watched was pathetically shot! the winner was well chosen, tall and elegant.

because jacinta gave up her crown... she got pregnant!

Look at the 2 nuns standing in line to see the ridiculous pageant.

i wonder if my Canadian born, 1/4 Samoan, Palagi looking daughter could participate in Miss Samoa?

Pregnant or not pregnant, she could have done as good a job. Pregnancy is not a disease, it's part of life, we all have to reproduce or the aliens will take over the earth.