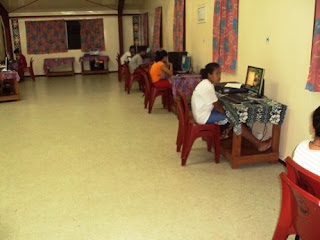 The scholastic “camp” for year 13s has begun at my school. Students attend 5 hours of class after the school day has ended, and then sleep on campus. Camp gives the kids an opportunity to get all of the curriculum they missed during the school year, and also gives them the chance to cram as year-end exams and the very important Pacific Senior Secondary Certificate exam in early November. The camp will last at least until then.

During Interval on Monday, my pule announced that all year 13 teachers would need to meet after Interval to put together the camp schedule. It wasn’t until we were in the middle of the meeting when I asked, “So when does this start?”

“Today!” said Maengi, the Indian missionary. I think she was as surprised as I was. Camp usually starts much closer to the PSSC exam, so Maengi, who’s taught here for 8 years, was caught off guard. Poor Maengi teaches two classes, so she gets two extra hours of teaching added to her days.

The scheduling meeting was pretty hilarious with everyone trying to pawn off the late night classes on each other. “Students learn maths better at night.” “No. The cooler air is better for the computers.”

Actually, the classes are pretty fun. Granted I’ve only had one class so far—my class was canceled on Monday because it was move-in day—but the kids enjoy being with each other and being away from home. And I really like the year 13s. So it works out.

Last night we did chat room review, where I ask questions over the network, and they type their answers back to me. The program we use, Net Ops, uses the name of the computer as the student’s handle. When Max and I setup the network, we named the computers alphabetically after other Peace Corps volunteers (e.g. Aaron, Blakey, Chris, Dylan, Erik, etc.). So last night my kids, who were already punchy by 7:00 p.m., started yelling at each other and calling each other by their computer/peace corps name.

“You can’t do that, BLAKEY!” screamed Marie (aka Grace) at Sisigafua (aka Blakey).

They apparently turn into a bunch of goofballs at night. The whole thing was pretty funny, and I enjoyed myself. But then I remembered I’m supposed to be teaching them. I worry about the increased productivity of camp getting lost. But I guess it’s also time that should be enjoyed. A six-week campout at the end of my senior year of high school, academic or not, would have been a blast.

So I’ll try and keep it light.

I hope you’re well. Pictures of the Hotel Kitano rubble below. 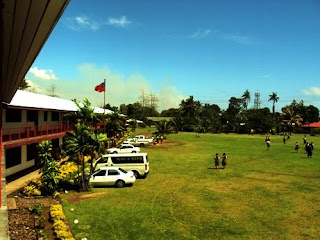 Supy texted me at 10:30 a.m. to ask if Hotel Kitano was really on fire. I looked out the window, and I could see smoke in the distance. 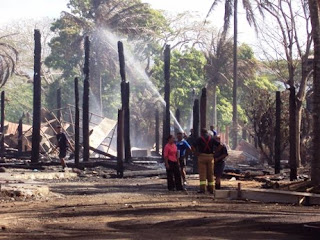 I biked over about 4 hours later, and firefighters were still hosing down the place. 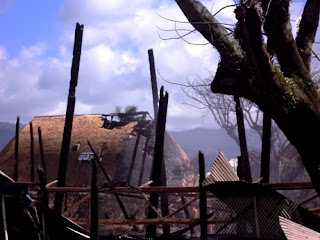 From where I stood outside the fence, the place looks like it completely burned down. 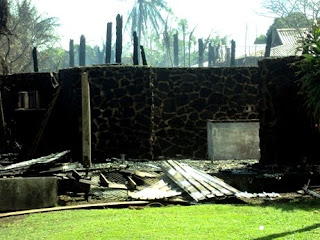 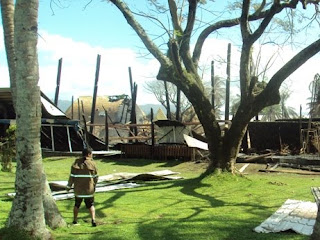 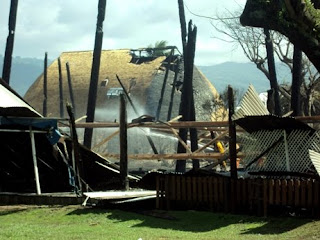 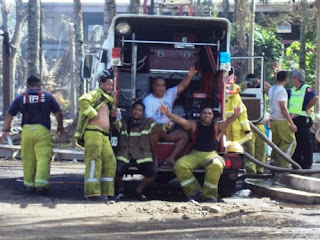 Firefighters started posing when I was taking pictures of rubble. 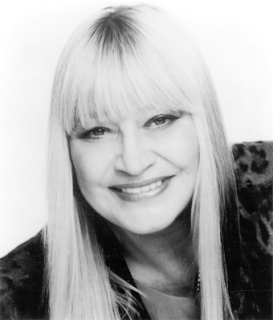 I am experiencing a range of emotions. I laughed out loud about "You can't do that BLAKEY!" I am sad about the fire & I was really sad to hear that Mary died. I almost started crying in the car. I was gonna text you. How do you find these things out so fast?!

Where is the hotel located? How far was it from you?

it's almost kinda like an emmaus retreat. kinda. almost. but with computers.

Can you spell insurance money???