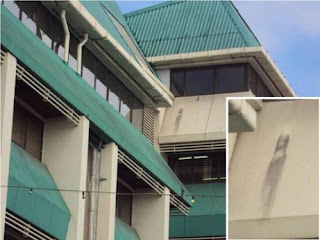 The apparition thing has reached critical mass. I sat down at Interval today to munch on my scone and drink my tea, when my pule called me out in front of the entire staff. “Hey Matthew,” I tend to sit across the room from him, and he has to project and it tends to silence chatter. “You should take your camera and get pictures of the Virgin Mary on the building wall.” Two steps ahead you, buddy.

One of the Indian missionaries, Thanpuii, asked if I had the pictures on my camera at that moment. I did. So my camera got passed around the staff room during our half hour break. People looked at it, stared, put their reading glasses on, took their reading glasses off. It got around the room and was passed back to me. And then Peniamina asked if she could see it again. So it took another loop around the room. It was quite the talk of the town.

I admit I’ve had a little trouble finding the right tone in talking about it. Loto, the science teacher (and moonlight taxi driver), wanted all the details. He interrogated me in a quiet, urgent voice. My pule asked if I thought it was real in front of the staff. I shrugged. “Ou te le iloa,” I don’t know. At first people smile and tend to giggle when they talk about it, but then their tone changes and becomes more reverent. The girl at the computer store asked what I thought, and I snickered a little; her visual cues told me she was uneasy with my response. “What do you think?” I asked, straightening up. “I don’t what to think,” she said.

In any case, I had to walk to town today to pay my telephone bill, so I took the chance to walk by again, and see how the spectacle was playing itself out.

It was as much as I could hope for. Taxis were stopping in the middle of the road so their fares could look at it through the window. People sat in their cars blocks away with camcorders zoomed in. A group of older ladies was camped out in the grass fanning themselves.

Walking around the building, I came to the front where a traffic cop regulated the flow of cars as best he could. People stood along the street looking up at the side of the building. The side has a lot more of the darker patches. There was a crowd across the street along the seawall looking up. I found this strange because the apparition is on the backside of the building. But the crowd, which was sizeable, stood with their cameras and pointed fingers.

Everyone stared at another dark patch. Less cool, I thought. You can’t have two Virgin Mary apparitions. It cheapens it. But I took a photo anyway.

The guy next to me saw me take the picture, and asked to see it. I zoomed in on the dark patch and he nodded. He looked a moment longer and then said, “Yeah. You can see his face. There’s the beard.”

Then I paid my phone bill. 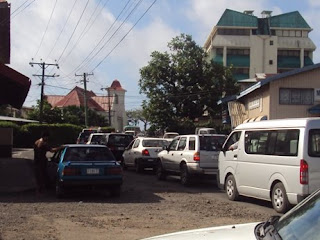 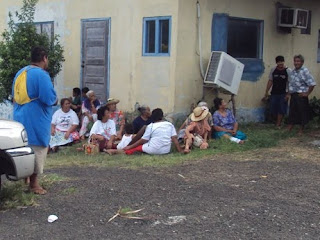 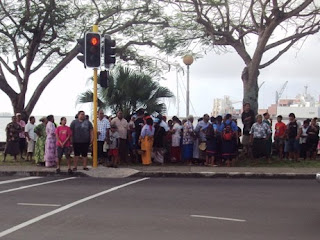 Crowd at the sea wall. 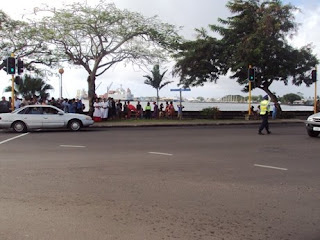 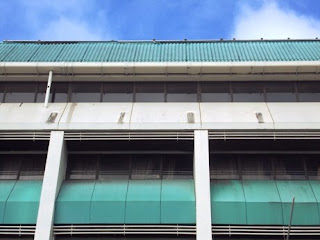 Dark patches along side of the building. 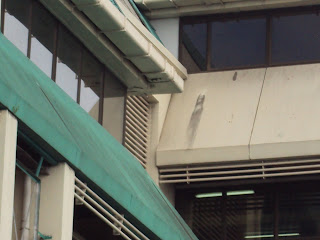 Cale and I were walking by tonight and things were crazy. The crowd was huge. I was almost hit by a car. The TV news was filming.

On another note, for Sara, be careful out there.

Are you guys serious, or pulling all of our chains? The splotch looks like.... a splotch.

Crazy how many people are there!

when it rains, it pours crazy in Apia

First Hillary Clinton, then the BVM and now Jesus. When do you think Elvis with arrive? I hope you're not having fun with your audience. But even if you are, it's worth the read.

I am so entertained! It's even on the samoa news online (http://www.samoaobserver.ws/).

I wonder if people have had trouble viewing it/driving by with the whole Road Switch Drama.

A good friend of mine who works in Apia just email me some photos of the Hotel Kitano burnt down this morning... Sad aye...

Hope will be seeing some pictures or get more info from your blog about it tomorrow.

Please please photograph it when the 'village people' show up..

And yes if got time definitely please cover the Hotel burning down in Apia..cos it's either a disgruntled exemployee or an insurance job by the new owners.

YOu should change your job, you should become a Reporter instead, ha ha ha coz your blog is so awesome to read n to know what's going on in Samoa... Very up to date news! (hat's off to you bro) Keep up the good work.