People Are Looking For You 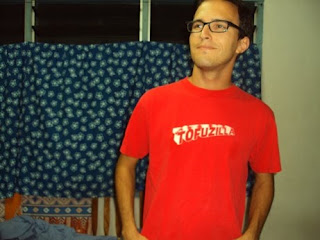 For one summer during college, I was a manager at the Union City Leisure Services Aquatics department, and I loved that job because I was perpetually busy. As soon as one task was finished, a pool attendant was waiting to ask a question or get approval for a task or needed help dealing with an angry parent. It was the closest I ever came to The West Wing where things were so busy we had to have conversations while we walked. Life in the Peace Corps is a lot slower, but on occasion I run into the perfect storm. There was an hour and a half during Interval and 4th period when things got a little crazy.

I have a relatively urgent email I need to send, so as my year 12 class ends, I shoo them out of the room and make a B-line for my house. I walk along the upper level to avoid running into staff, but before I get too far, I run into Filifili, who was pointing at a car driving up. “Lesamoa is here. For you.”

Lesa’s Telephone Services is the company that supplied my school’s computers and since the computers are still under warranty, we go to them whenever one breaks down. We recently had a problem with a failed hard drive, and they’re bringing back the repaired machine. I turn around and head back to the computer lab.

I swear the car drives into a worm hole. It vanishes. After 2 minutes standing idly at my classroom door, I give up. I walk to my house.

With dial-up, there’s no quick way to send an email. There’s a login process and passwords. My email contains pictures, so it takes even longer. Someone knocks on my door.

The boy is young, and he has to psych himself up to speak English to me. I wait. “Mamea wants you. You must go to see Mamea.” Mamea is my pule. I am being called to the principal’s office.

72%. Another knock on the door. It’s the same boy. Could he really have gone all the way to the principal and come all the way back? “Mamea wants you. You must come now.”

I drag my feet.

Lesamoa found Mamea and he opened the computer lab. There’s a VGA cable missing. I think Lesamoa has it. The girl thinks that might be true. I tell Mamea we have another broken computer for Lesamoa to take. He laughs.

I show the tech, Eleanor, how the Dell Optiplex unit makes an awful beep when it’s turned on. She says it’s a RAM issue, and all you have to do is pop it out and stick it back in. She does so while Mamea and I watch. The computer is fixed. We are impressed.

There’s still a sliver of break left, and I head down to the teacher’s lounge to see if I can still get tea and a muffin. To’o stops me. He wants me to take a bunch of songs off his mp3 player and burn them onto a CD. He’s written out a playlist by hand.

He hands me the list, his flash drive, and 2 CD-Rs and I head toward my 11.2 class. I’ve given up on the muffin. A student, Joanna stops me. She needs to print an essay in the school secretary’s office. I turn around and go with her.

While on the secretary’s computer, To’o finds me and asks for his flash drive back because he needs to give a file to Mamea. Maengi sits down and says her Microsoft Word is acting strangely. I promise her I’ll stop by her house later to check it out. I print Joanna’s essay and hand it to her. To’o returns his flash drive, and asks if I can copy the file for him. Peniamina throws a paper-clipped pile of notebook paper in my face and asks if I’ll type her exam.

There are brief bursts of popularity around here, and I can’t help buy bask in the warmth of feeling needed.

I hope people are looking for you. Pictures below. 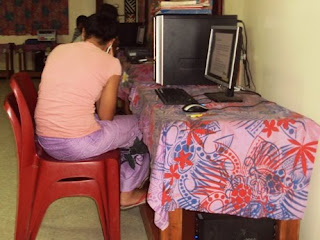 The local cell phone provider, Digicel, has a deal where you get free night calls (10 p.m. to 6 a.m.) if you talk for a certain amount of time during the day. This was a problem in my 10 p.m. class last night when Marie and Kate spent most of class on the phone. I could have made them hang up, but ehhh... 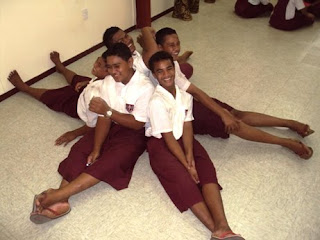 These guys brought the whole Forrest Gump/Bubba "I'm gonna lean up against you, you just lean right back against me" thing to a new level.
Posted by Matthew at 8:00 PM

i LOVE Samoan broken english! this was a funny day...being needed...wears thin as a parent! LOL!