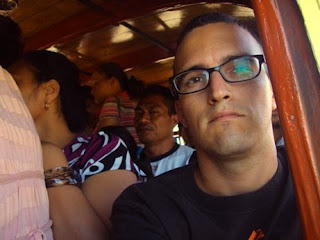 3:05 p.m.
It’s Friday afternoon, and I’ve decided to head out to the village. I’ve been able to make it back to the training village at least once every month since we moved out, and this weekend was my last chance to keep that record alive for September. I’m exhausted and village sleep doesn’t tend to be restful sleep, so to keep my spirits up, I planned to eat at the fish market. Leai se mea. The fish market served the last fish’n’chips to the person in line in front of me. Boo.

Luckily, there’s a bus for Fausaga waiting when I arrive at the bus stop, and it’s mostly full of people, which is a good sign it will leave soon. Even with the crowd, I’ve managed to get a seat. Awesome.

4:05 p.m.
We haven’t left. A large sweaty man came and sat next to me soon after I took the seat. One of Phil’s host brothers is sitting in the seat behind me. We’ve made small conversation, but after an hour, there’s not much left to say. I consider taking out my book, but more than anything else I want to nap.

I have a window seat, and a boy has come by to offer me an off-brand peanut treat, which seems hardly worth the tala he’s asking.

There’s also a very drunk man who has a large bandaged wrapped around his leg who has taken to entertaining the crowd by playing a game of rugby in the bus parking lot with 21 invisible players.

5:05 p.m.
The driver has started the bus, but we’re still at the bus stop. A small child has been assigned to sit on my lap. He’s hesitant when he comes to sit, and I had to lift him to better situate my right leg. This creeps him out even more. Whatever, kiddo, I was using circulation, and you were heightening my chances of DVT.

The center aisle is more crowded with standing passengers than I’ve ever seen a bus here (which is far more crowded than I’ve ever seen Muni. And there’s still a fair sized crowd waiting to get on. I can’t figure out what’s taking so long. It’s as though passengers are slowly contorting themselves in order to make space for the person in line behind them. I’m glad to have a seat.

6:05 p.m.
We pull away from the faleoloa. The kid who was sitting on my lap found a ride at the gas station where we stopped. He’s been replaced by an older kid who sits on the window sill rather than my lap proper. At one point during the ride, he asks how good my Samoan is and then tells me he’s one of Koa’s students. I text Koa.

I’ve figured out I can quantify the number of people on our tiny bus by counting the people getting off. With the density of bodies on board, it’s impossible to do a head count, but I’m sitting on the side of the bus with the re-located left-side door. Keeping tally passes the time.

7:05 p.m.
I get off the bus at Fausaga at almost exactly 4 hours after I originally embarked. Using my counting system, I estimate there was somewhere around 86 people on my bus when we left Apia. I remember the capacity of the long yellow school buses in elementary school was 87. This bus is probably half the size of one of those long school buses, and most of the people here are larger than your average elementary school student.

In any case, I’m here. And Samoa’s bus problem hasn’t been fixed yet. 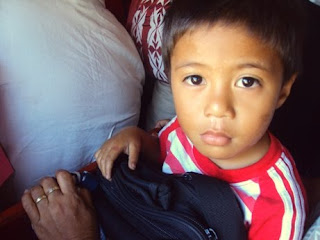 This kid sat on the lady sitting next to me on the bus. 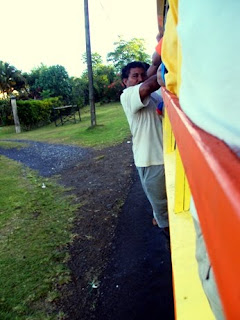 The bus was crowded enough this man had to hang off the side. Yes, this is par for the course on cable cars. It's not so much the norm in Samoa. 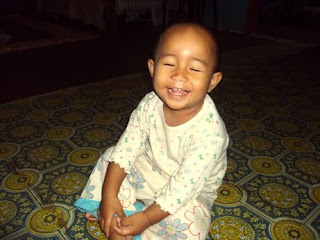 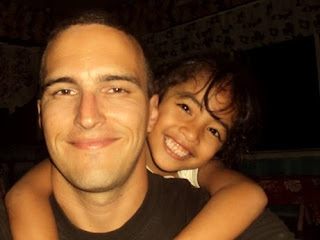 Matt, I can just feel your enthusiasm in the first photo lol. I try make it a point to avoid buses in Samoa mainly because it tends to be overcrowded & creepy people seem to tap their knees too enthusiastically for my taste lol. I can see where you're coming from but it's another experience to add to your memory book I guess. Your photo with Akanese is extremely cute! Anyways, hope your sunday is eventful (yes, I realise that nothing much happens on a sunday). All the best & keep smiling!

Akanese is getting bigger too. She looks like such a happy kid.

Did you ever find out why the bus took too long to start up?

I can only imagine how you felt on that bus....that's how it's always been...people hanging from the door and butts out the window...I don't think it'll ever change LOL! Love the pic with Akanese...she's so adorable.

you smile differently with akanese...a sweet bond you both have!