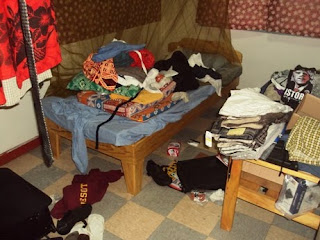 I haven’t lived in the same building as my washer and dryer for 4 years. I’ve been trekking my clothes back and forth to the Laundromat every so often ever since, and this makes me loathe laundry. I’ve never had a problem with the folding or the putting away of clothes; I simply can’t stand the schlepping. Here in Samoa, the full-service Laundromat does the folding. All I have to do is schlep and put away. I still hate the schlepping, but the putting away has become baffling. In the 9 months I’ve lived in my house, I haven’t figured out a system of organization for my clothes.

I’m not sure why there are very few dressers here. Koa has one, but that’s the only one I’m aware of. My host family in the training village—like many other Samoan families—uses suitcases. Everyone had their own; Akanese’s was full of tiny t-shirts and balled up socks (Looking back now, those probably weren’t socks. Who wears socks?). When I borrowed one of Oge’s shirts for church one Sunday, it came out of a suitcase full of bright whites.

I think the practice of permanently living out of a suitcase evolved as a result of living in an open fale. A chest of drawers doesn’t belong in the middle of the room, it belongs against a wall. But an open fale has no walls. It’s open. Large bulky furniture doesn’t make sense. People store stuff in boxes that lie flat so the breeze can pass through.

The method makes sense for other reasons too. The zipper deters moths and other insects from eating clothes. Whereas wooden drawers might hold in the humidity, the fabric walls of luggage are more air-permeable; it allows the clothes to breathe.

So when I moved out of the training village and into my sparsely furnished house, I used my own suitcases to organize my clothes. I brought 2 when I came from The States, and it seemed like a “When in Rome…” kind of thing.

I hate this method. A suitcase is similar to a drawer, except it opens via flap, so you can’t put anything on top of it. If you have enough clothes to necessitate 2 suitcases, you can’t lay them on top of one another. If you pull a t-shirt from the bottom of the pile, it upends the shirts stacked on top of it, and inevitably there’s a huge amorphous mass of dirty and clean clothes when laundry time rolls around again. And there’s no compartments. It’s like I have to imagine an permanent invisible line that separates t-shirts from underwear from socks. And it sits on the floor, which is a pain because you bend or kneel constantly. It sounds lazy, but in practice it’s lousy.

So what can be done? I could pay a fortune to get a dresser, but given I’m 9 months into service, it wouldn’t be very cost effective. I could make another cinderblock shelf, but storing clothes on a shelf seems nearly as bizarre as the permanent suitcase method.

Phil thinks if I’ve made it this far with the suitcases, I can probably make it the rest of the way. We’ll see, Phil. We’ll see.

I hope you’re well. USC’s win against Ohio State this evening was AWESOME. Pictures of Samoa below. 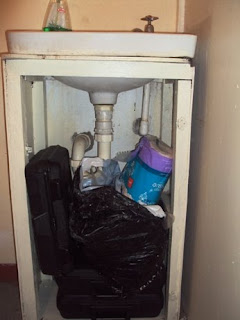 My bathroom could also use a drawer or two. Or a medicine cabinet. I've been using this tired Banana Republic bag since I moved in. Slightly pitiful. 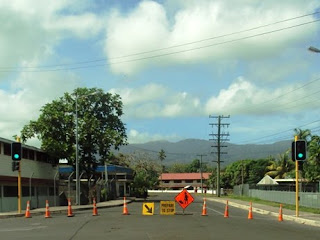 The road by my school was closed today... 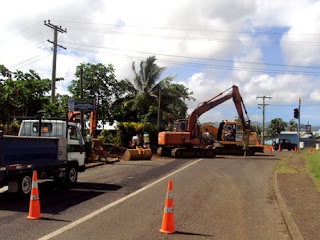 ...because of construction going on up the hill. Not sure what they're doing, but I'm sure it's Road Switch related. I think there's a backhoe behind the drill.

That Banana Republic bag needs to go! I think the shelves would be cool. I think you should hang more stuff, but I already told you that.

You hit the nail on the head...Samoans definitely put their clothes in suitcases and not drawers. I never thought about that until now.