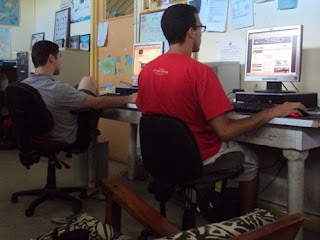 I talked to Jennifer and Tom on Facebook about two weeks ago, and they were both getting ready to start the new school year. This caught me by surprise. Living here, I sometimes forget that time didn’t stop when I left America. And with all the strange time differences between Samoa and The States—the time zone change, the hemispheric change, the absence of seasonal change—it can be difficult to fathom time passing back at home. But with the slightly (SLIGHTLY) drier heat and being out of school, this week it seems like Samoa and America are in brief synchronicity.

I met Max at the Fish Market for lunch today. We chatted and sipped nius and watched the fishmongers, and when we were done, we both headed to the Peace Corps office. I’d been meaning to look into making LSAT arrangements and Max had his own business to attend to. In any case, no one was around for much of the afternoon, and I ended up spending a couple hours on the hi-speed internet.

It doesn’t take more than a couple hours of sustained internet to feel like you’re in America. Between Facebook and the San Francisco Chronicle’s website, I can get everything from national news to friends’ vacation pictures. I chatted with a friend in Los Angeles and with the office’s air conditioning, I may as well have been in my own cubicle in The States.

This synchronicity is nothing new. Any hi-speed internet can provide the temporary perception of concurrence. It was what happened when I got off that really made me feel the connection.

I left the Peace Corps office to walk to my house, and I heard someone call my name. It was Country Director Dale, who was also walking home. His house is a lot farther up the mountain, but I live along his route. So we walked and chatted. We talked about school starting up again and college football, the same conversation could have been had in Toledo.

When I got back to campus, a group of high-school-aged guys were playing soccer out on the grass. I’m unclear if this is some sort of organized league or if it’s just a daily pickup game. Either way, it wouldn’t have been all that out of place in Toledo today. Ehhh… Maybe Toledo would have more shin guards.

A bunch of the Indian missionaries are gathered next door cooking and listening to music on the radio. They congregate much like Peace Corps volunteers during school breaks, and our school’s central location makes Maegi’s place a popular hangout.

And sitting here on my couch, I can hear the hooting and hollering from the soccer game off in the distance. And I can hear murmurs and music from next door. And between the gentle breeze and the electric fan next to me, it feels like a comfortable summer evening in The States.

I hope you feel it too. Pictures below. 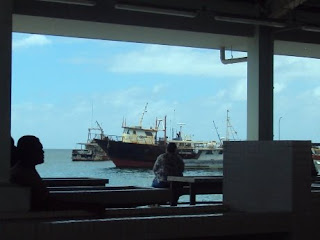 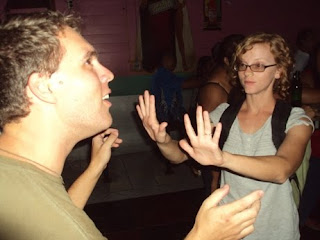 Christian and Sara at Crabbers Dance Club. Christian's done with his service. He leaves the country tomorrow. 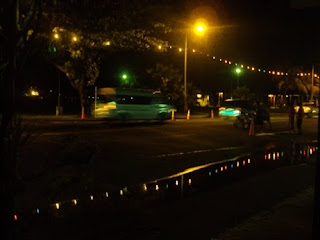 Teuila lights reflected in a rain puddle while road crews paint arrows on the street. I really like this picture.