Casio, Kiwis, and Movies (in 2 Parts) 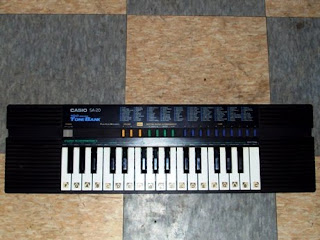 Part One
When my parents came in May, they surprised me by bringing my small, 32-key Casio keyboard. I must have been in first or second grade when I got this thing, but its usefulness has proved to be long-lasting. Back in the day Jeff and Christine used it to tune their guitars. Later it provided the theme music for our “Marsupial Love Connection” Odyssey of the Mind skit. And I just used it last week to figure out the key of Madonna’s “Crazy for You” (E major).

The keyboard is totally 80’s fabulous. It has 100 different tones—including Honky-Tonk Piano, Ocarina, and Typewriter—as well as a demo button that plays Wham’s “Wake Me Up Before You Go-Go”. It also includes 32 rhythms/super accompaniments, which can provide background percussion or a 4-bar repeating chord progression. Many of these are high on percussion, low on chords (Rock 1, Rock 2, Disco 1, Disco 2 , etc.), but there are also highly stylized “super accompaniments” with titles like Bagpiper, Fanfare, Classical, and New Age Music. Trent and Phil have gone through the entire catalogue on separate occasions.

So yesterday while I was waiting for my laundry to finish, I watched an independent Kiwi movie called, “Eagle vs. Shark”. The Napoleon-Dynamite-esque movie stars, among others, Jemaine Clement of Flight of the Conchords. About 20 minutes in, Jemaine plays a cassette tape, and the music immediately seemed familiar. It took about 20 seconds, but I recognized the “Classical” super accompaniment. Shortly thereafter, the “Fanfare” super accompaniment can be heard.

The movie’s music was written by The Phoenix Foundation.

Part Two
When we were in Auckland in May, we were walking through the Sky City complex when this 2-man coffeehouse band started playing the Eagles’ “Peaceful Easy Feeling”. I’ve never paid much attention to the song, but these guys had slowed down the tempo a bit and emphasized a chord in the refrain that the Eagles kinda neglect on the original track. It took most of the song for me to figure out where the change was, and Luisa got a bit antsy.

So the final line of the refrain: ‘Cause I’m aaaaaaaaaaalready standing on the ground. They changed the second chord in the aaaaaaaaa part. I made a mental note.

This morning Paul and I watched “The Big Lebowski” after church, and there’s the part where The Dude has just been roughed up by the Sheriff of Malibu (a real reactionary), and the taxi driver kicks him out of the cab because The Dude complains about the Eagles. “Peaceful Easy Feeling” is playing at that part.

I was inspired to break out the guitar and the Casio. It turns out the Eagles play an F# minor, but the Kiwi duo made a tiny change: they made it an F# minor 7. One little note change improves the song so much!

I apologize this post has nothing to do with Samoa (although there is a Samoan prominently featured in “Eagle vs. Shark”), but today was a rainy Sunday. There’s nothing going on in Samoa anyway. More Samoa stories tomorrow. Pictures below. 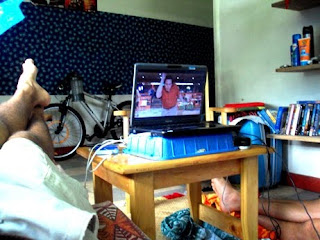 Me and Paul watching "The Big Lebowski". Me on the left, Paul on the right. 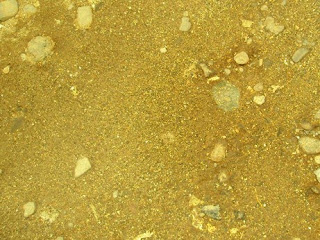 I saw this shiny thing in the road this morning. I thought it might be a hatch. But it turned out to just be a piece of glass. 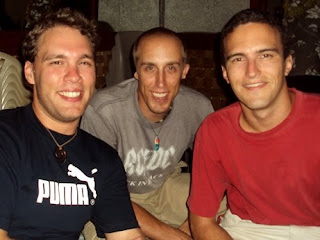 Christian, Benj, and me. The 3 of us born within 4 days of one another. Christian, who is hours older than I am, is in group 80 and extended a month. He left last night. Benj is also in group 80, and he has extended a full year.

It was Dad's idea to bring the keyboard. I'm glad you're enjoying it.

For some reason, since I read the words "Casio" and "wham", I have Axel F in my head playing right now. Weird.

I totally wish that piece of glass was a hatch. Can you imagine the blogging?