4:15 p.m.
I just talked to Asolima and she said Fausaga is okay. They have a marshy inlet that separates the village from the ocean, so it was able to blunt the effects of the rising tide. Nonetheless, many of the families have retreated inland to the more elevated maumaga. As I was on the phone with Asolima, she said the radio was broadcasting new tsunami warnings and they would probably head up the mountain once more. She added they'd probably sleep there.

Much of Fausaga's neighboring village, Tafitoala, sits along the ocean and was badly hit. Much of the Tafitoala Beach Fales have been wiped out as well as a bunch of the other houses along the beach. Neighboring beach resorts, including Sinalei and Coconuts, were also badly hit.

Koa is fine. He lives on the north side of the island and everything in his village is mostly back to normal. Supy evacuated with Dan and Paul and spent the morning drinking niu. He said the water level rose, but his village came through unharmed. Phil lives right on the water, but said the water didn't come onto land. Paul and Dan's village suffered minor damage, and a woman reportedly died from a heart attack.

I've heard Erin's village may have seen a 20-foot wave. That estimate is based on boats lying 200 meters inland. The secondary school in her village collapsed. 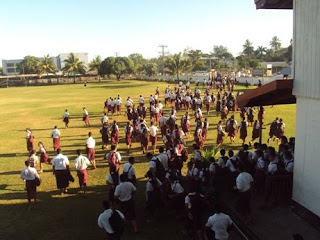 1:30 p.m.
The tsunami warning was cleared around 11:45 a.m. By then I'd walked up to Blakey's. After the all clear, we caught a ride back down the hill along with Briony and Jenny. Apia is all shut down. Schools are closed. Restaurants are closed.

News is sketchy. It sounds like the south, and particularly the southeast, parts of Upolu were most affected. It's difficult to know whether the damage was caused by the quake itself or the subsequent rising water levels. I've also heard the number of fatalities is 14, although it was unclear if that was for Samoa or American Samoa.

Erica 80, who lives down there, thinks she lost her house. Blakey talked to Erin 81, who hadn't been back to her house since the quake, but thought were house would probably be okay. That said, she said one of her year 5s died.

I have not heard any news about Matt 79, but he lives on the southwestern side of the island, which seems unaffected. From what I've heard, all Savai'i volunteers are fine.

News from Fausaga has been slow to come in. I received a text message from my Host Sister Asolima this morning asking if I was okay, but she didn't respond when I texted back. More on the host village (and neighboring Tafitoala, Jordan) when I hear back.

Most shocking to me is how strong the earthquake was for me and that I was on the far side of the island from the epicenter.

Pictures of this morning's evacuation below. Earlier posts below that. 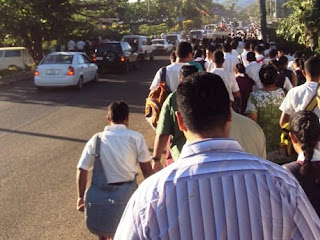 The sidewalks of the Cross Island Road were filled with people hiking uphill. The road itself became a one-way two-lane road uphill. 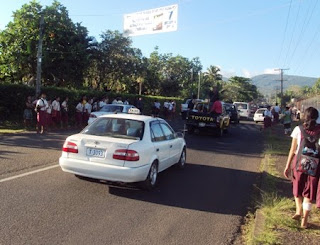 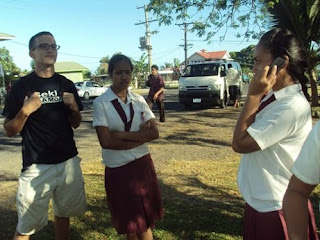 Me standing with year 13s. 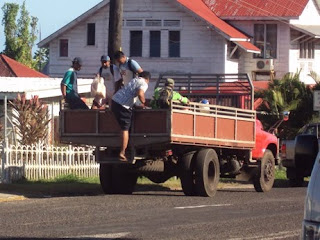 Flatbed trucks were used to cart loads of people uphill.

8:41 a.m.
Most of Apia evacuated to higher ground. Uphill roads became one-way highways for cars and buses, but most of us just walked. Tsunami sirens blared across Apia. Church bells rang. My school rang its bell. The Peace Corps sent out mass text messages, which they followed up with phone calls to make sure everyone was heading inland.

I walked with a couple girls from my 11.3 class and held an impromptu geology lesson.

Eventually I setup camp with a bunch of year 13s where we had plain sight of the ocean. We hung out in the shade, and my cell phone got passed around.

After about an hour some people started heading back downhill, but most of us stayed in place. I wanted to get clear word from the Peace Corps before I left. And then I did.

It’s unclear what this means for the rest of the school day. Since there’s no articulated evacuation point, students and staff were strewn across multiple villages and it seems impossible for us all to come back and spend the rest of the day as normally scheduled.

We’ll just have to wait and see.

6:57 a.m.
About 8 minutes ago, we just had a big earthquake. Big. No information yet on the exact magnitude, but it was quite long and certainly big enough to knock over stuff around my house. I'm guessing it was at least a 6.0 on account of the stuff flying about. About 40 seconds in, I grabbed my laptop because I was afraid the cinderblock shelf was going to fall on top of it. The quake went on and on and on to the point it felt like it was continuously shaking into the aftershock phase. And we've had a couple aftershocks already. 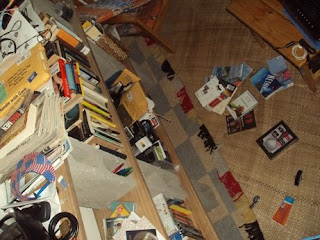 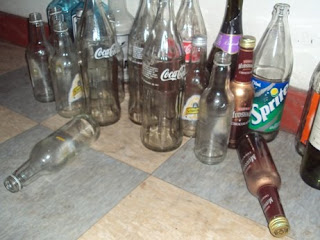 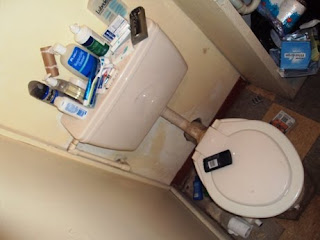 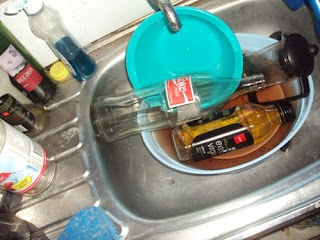 News are talking about danger of tsunami..?

Stay safe! ...and keep posting if you can.

glad you are ok Matt...have you talk to Koa, we could not reach him? Stay safe...
Marija

reports of the south coast of Upolu being aversely affected??

Be safe. We're praying for you.

Glad to see your post since I just read the news about the earthquake/tsunami warnings. Take care!

Yes, we're praying for you in Australia.

Our Lady of Perpetual Help, Pray for us!

Yeah, it's moments like this when Fono's advice about taking Tsunami warnings seriously comes in handy. But from the reports, this earthquake took place when folks were waking up. Glad you're safe Matt and hopefully none of your students were caught in the quake on their way to school.

The news here says 8, so please please be careful. Sara hasn't posted, but you are all in our thoughts.
Take care and be careful.

MIGHT want to fill those empty bottles with water.

ahh yeah start stockpiling water, the ap will probably be off for ages afterwards. And head for the freaking high grounds already..

Glad to hear you're okay. Reports here in Australia are reporting fatalities so far of 14. I'm guessing most of the damage was done around downtown apia? My family back at home said alot of people managed to get to higher ground around aleisa/ululoloa etc. which is good to hear. Also NZ is sending in assistance to help search for survivors.
All the best & my prayers are with the people of Samoa.

I should clarify that the fatality numbers are still sketchy. Not sure if they've melded american samoa + samoa together or what. All the best once again! and yes the water supply tip is a good one!

Glad you are ok- please update us (especially us RPCVs!) about what's going on- particularly on the south side! How is Tafitoala??? (That was my village.)

Woke up heard about earthquake (they are also putting tsunami warnings for the ca coast tonight), checked your blog. Glad to know you are ok. Keep us updated.

thanks for the update matt! can you let us know if you hear from supy?

Matt, I am a journalist working for the BBC in London. we are trying to get in touch with people in Samoa to get an overview of the situation. Can we call you please. Thanks, Orsolya

My condolences to Samoan and American Samoan brothers and my support from Argentina.
Pablo Aro Geraldes

I am so glad to find out about this after our Sara called and let me know she was alright, down a the Peace Corp office. I am so glad you guys are keeping up the blogging, though it must be tough, because we all want to know how you guys are doing. Keep safe!

Thank you for the update Matt. I am the volunteer that 2 years ago left the school Paul is at and it was hard to find information about Satupaitea and Uesiliana. I appreciate all of the volunteers updating us returned pcvs who are/were worried about our families there.

There is a facebook page entitled the Samoa Tsunami Relief Effort where folks can go and share news. Many former pisikoa are on that site and more are joining for information. Thanks for sharing the info and we are looking forward to more updates. The NZ Red Cross is taking donations specifically for the Samoan Red Cross http://www.redcross.org.nz/cms_display.php?st=1&sn=13&pg=6341

Matt,
It is such a relief to hear you are all okay. Thank you so much for keeping us informed.

So glad you are safe. Please take care of yourself. Everyone is praying for Samoa.

Just want you to know that we're thinking about you tonight. After watching the news tonight (Samoa was the lead story), we're even more relieved that you are ok! We appreciate the posts.

Your blog is seriously a godsend. I've blatantly advertised it on twitter (@pacific_soul) for those who are interested in viewing pics/information on the horrific event (and ALOT of people are interested- it's the main story on most news channels here in Australia including the cable ones...NBC, CNN, FoxNews). It's good to see decent coverage but it's still too early to fathom what's happened I guess.

All the best in the coming days. Take care & keep us posted!

so saddened about whats happening in Samoa and feeling for those who have lost in this tragedy...thoughts and prayers are with you..take care Matt and thanks for the updates.

Why don't you text me back?!?! You need to be topped off boy.

Looks like you just can't stay away from the fault lines. lol. be safe out there. Soifua.

So glad to hear you Pisikoa are all safe. Thanks for posting all this info.
-Alesi, group 57

matt! so glad you're ok. i've been hearing the news and was thankful you've been updating your blog so frequently. take care of yourself!

Thanks for posting... glad to hear you guys are all safe. Thanks for the good work you're doing for our country. It was really hard to watch TV especially the part where they wrapped the little girl in the mat to bury. OMG, it is so heat wrenching. God's blessings!

this was a sad day for me in Canada...there were many of my friends who know I'm Samoan who expressed their condolences to the people of Samoa - it was touching. Nice to see the support on your blog...i think i agree with what "job" is saying??