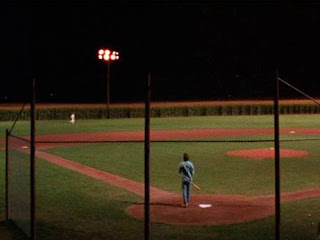 My parents brought a bunch of movies with them when they came to visit, which has worked out well since I’m in between seasons of Weeds and The West Wing right now, marking time until school starts again in June and my nightly routine can commence. Many of the movies they brought are from the late 1980s, which might be my favorite movie era. I fell in love with music in the early-mid 1990s, but movies came earlier. “Rain Man,” “Stand By Me,” “Big,” “Ferris Bueller’s Day Off,” “Back to the Future.” And though it’s not my favourite, I’ve watched “Field of Dreams” multiple times since my parents left.

In the time leading up to the Super Bowl, there was much chatter among group 81 about whether we would be able to watch the game, and if so, where. I admit, my level of interest in the Super Bowl was lukewarm at best. I didn’t grow up in a house that valued football, and I didn’t really care too much about the sport until I got to USC. But throughout the Super Bowl crisis, I worried about missing out on baseball.

Not that I’m all that much of a baseball fan. Between rough Little League experiences and the players’ strike of the mid 1990s, baseball and I had a falling out that wouldn’t repair itself until college. And when baseball and I reconciled, there were significant changes. The Oakland A’s are unrecognizable from the franchise I routed for in my youth; feeling alienated by the drums, the flag-waving, and the Coliseum counterculture, I’ve morphed into a San Francisco Giants fan. The bigger change springs from the distrust that plagues any reconciled relationship. In the late 1980s, I put a lot of emotional dependence into baseball, and it let me down. And I don’t know that things will ever be the same.

See, 1989 was quite a year for baseball in my life. Carter and I were in our second year of tee ball. The Giants and A’s went to the World Series. “Field of Dreams” debuted in theatres (Incidentally, Dire Straits’s “Walk of Life” was just hitting its stride as a common anthem at sporting events, and I still associate that song with the blithe innocence of my childhood.). Baseball came into my life on such a high note, that there was nowhere for it to go but downhill.

“Field of Dreams” became one of those videos at Marlis’s house that got watched nearly every day for an entire summer. I can still recite nearly every line from the scene where James Earl Jones threatens to beat Kevin Costner with a crow bar. I remember Tanya explaining the premise to Todd the first time he saw it, and realizing how absurd a premise it is. But mostly I remember the baseball.

It’s funny how James Earl Jones’s big speech in the movie is about how “America is an army of steamrollers and the only constant is baseball,” but for me, the movie itself is so iconic that it’s as much a constant as the actual sport.

And so in the absence of major league baseball, a baseball movie with little actual baseball is surprisingly sufficient. It’s intertwined enough it’s able to scratch the itch for now. And that itch has been festering since Spring Training, which might explain why I’ve gobbled up 2 disks worth of special features and I still feel like I could watch the movie once or twice more before moving on to something else. Or, you know, six or seven more times, maybe. Hell, maybe I’ll just bring it to New Zealand for a couple more screenings.

I hope you’re watching baseball in my absence. And I hope my fantasy team continues to thrive. Pictures below. 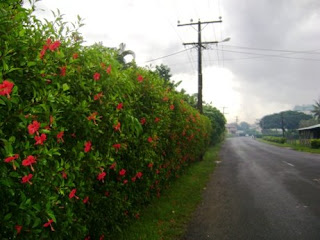 This hibiscus bush on my daily path is in full bloom despite the overcast sky. 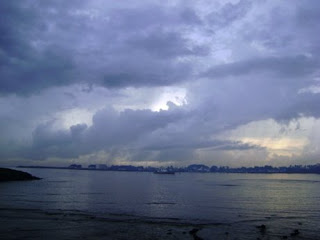 Clouds over Apia Harbour this morning.
Posted by Matthew at 6:10 PM

I just saw the new Star Trek movie and it is awesome, I hope the cinema you have in Samoa will do it justice because the effects are pretty good.