Joe and Patty are Here Walking down the aisle of the pasiovaa this morning, climbing over legs, trying to get off quickly since I made a slight breach in bus etiquette by asking the pasiovaa to stop anywhere other than the bus stop in Apia or the wharf. And in trying to maintain a low profile at 5:30 a.m., the toe strap on my flipflop became disconnected from the sole, and I had to repair my shoe mid-bus-disembark. It was awkward and decidedly un-low-profile.

Today marks exactly 7 months since group 81 arrived in Samoa, and picking up my parents this morning was the first time I’ve been back to the airport. It was kinda cool to be there again and see it through more seasoned eyes. Not that there’s much to see there. The airport is pretty tiny, but there are some cool wooden carvings from Koa’s school. And it was cool to see the place when I’m not overwhelmed and jet-lagged and exhausted and on sensory overload.

Once again proving how tiny a country Samoa is, I was leaning against a post waiting and the girl standing next to me goes, “Malo Matthew!” It doesn’t shock me anymore when strangers know my name, but it still feels a little cool. It also turned out she’s a student at my school. She’s a year 12 who is not in any of my classes, so I was guilt-free for not recognizing her. Also, I’m a lot better at not being obvious about not recognizing people. And while I was talking to the, a teacher from my school walked by. The girl grimaced a little, and I felt it would have been awkward to leave the conversation with her to say hello to the teacher. So that was that.

I think my parents’ flight was scheduled to arrive at 5:35 a.m., and I remembered when we came through that it took a while to get through customs and baggage claim and another round of customs after baggage claim. But I didn’t really put all of this together, and as time ticked by I started to get nervous. I’m usually at school by 7:40, and as I calculated how long it would take to get from the airport to the hotel and from the hotel to my school, it became increasingly obvious I would be cutting it close.

Since my parents were re-routed through New Zealand, there were a lot of New Zealanders coming out of the Arrivals area, and it was weird how they were quite clearly not American. There was nothing particularly different about them. You could just sorta tell.

I saw my mom before she saw me. It was good to see her and not as anachronistic as I was thinking it might be. The Peace Corps is the first time in my life where I’ve only interacted physically the last 7 months with a completely insular set of people who I’ve never met before. All the people I see every day are people I never met until October 6, 2008 earliest. So it was nice to see my mom.

My dad came out after. It was good to see him too.

And 48 hours after they left home in California, they arrived in Samoa. And I made it to school by 8:00. 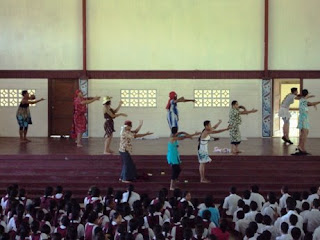 For the Mother's Day assembly today, a bunch of boys from the year 12 and 13 classes dressed up in drag and did a skit and dance. The dance was really funny, and part of it involved the Macarena. Even in Samoa, the Macarena is a joke. 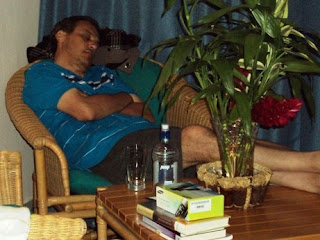 Joe getting acquainted with the Samoan lifestyle. 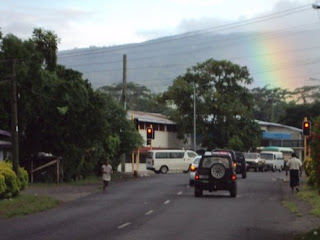 Hard to tell from this picture, but this rainbow was so vivid and so close. It looked like it ended just beyond that stoplight on the right. Disappointing that the camera has such a tough time picking it up. 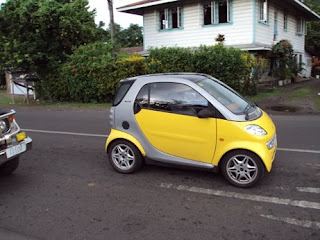 I saw a Smart Car today. It was crazy.

i love you guys!

so glad they finally made it! have a great visit!