Note: I was unable to post this blog on Monday because the door to the satellite Peace Corps office in Savai’i was locked from the inside. Apologies for the inconvenience. 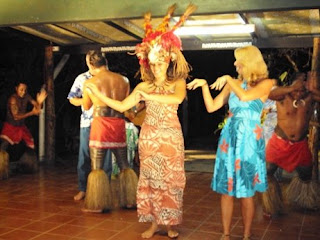 At dinner tonight, some locals put on a tableau of Samoan culture featuring dancing, drumming, singing, fire dance, and an ’ava ceremony. A film crew was on hand to videotape the show and the audience reaction as part of a promotional video highlighting Samoa’s many tourist attractions. The show moved at a frenetic pace, often using the yelling and chee-hooing of traditional Samoan dance to keep the audience on edge.

But as we moved through a bare-bones ’ava ceremony, taupos wearing attire far more attractive and form-fitting than the traditional fine mats, and an overweight palagi being pulled out of the crowd to try his hand at the Manaia dance, things started to feel a little wrong. Cultural presentations are great, and I’m all for celebrating one’s heritage, but at some point it becomes sheer selling out, and it was unclear where we were on that spectrum tonight.

I admit, training in the host village totally has me on my high horse. While it’s not one of the Peace Corps’s articulated goals, part of the cultural immersion of the 11 weeks of training was to give us an understanding of Samoan culture that dug deeper than a simple, cursory knowledge. Though in some circles the Peace Corps has a reputation for being a 2-year vacation, living with a Samoan family and participating in cultural events and even hanging out with my students gives a more studied perception of the culture. And as much as PCVs are strangers in a strange land, after a month or two, we are barely tourists.

So tonight was a change in mindset. I feel like I’ve been walking on egg shells the past 7 months, trying to show as much reverence as possible. I’ve sat cross-legged through hour-plus ’ava ceremonies, curbed habits perceived as disrespectful, attended 6 weeks of Culture Day practice; I’ve treated culture with utmost respect because, if nothing else, my perceived reverence affects the way staff, students, and other Samoans think of me. So it’s off-putting to be in an environment where dance and culture are treated light-heartedly and as being slightly inconsequential.

But maybe I’m just a culture snob now. Maybe I’m not giving the Samoan dancers or the palagi audience enough credit. Maybe the point really was to celebrate Samoan culture in a way that is most easily accessible to visitors who are respectfully trying to enjoy their vacation. And maybe the free market via Samoa’s budding tourism industry can do more good for the Samoan quality of life than the Peace Corps at this point.

My parents enjoyed the show. During the ’ava portion, my dad was one of the people in audience picked out to receive ava, and I think it was a rush for him to be put on the spot; a rush in addition to the mildly euphoric affects of the ’ava itself. He also took video of the dancing with his digital camera, and he replayed parts of it back in the hotel room later this evening, saying, “That is just amazing.” So it sucks my parents missed culture day, but I guess tonight’s show was the next best thing. 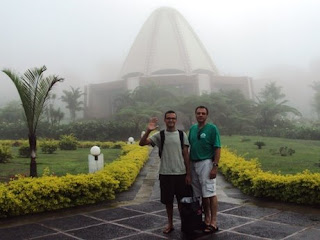 My dad and I in front of the Baha'i temple on Upolu. 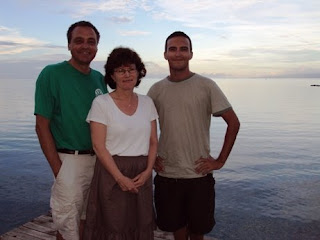 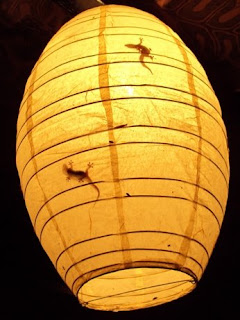 Geckos in the light fixtures. 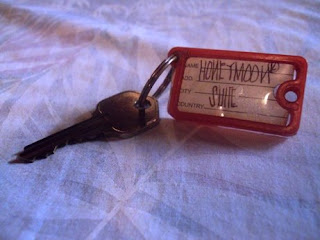 My mom unknowingly booked the 3 of us in the Honeymoon Suite. Awkward.

I've been following your blog for a while now and I must commend you on the extradonary commitment you made understanding Samoa's living culture. I understand being a PCV demands this of you but your own personal take on it is most admirable. So take time out and relax with your folks, I recommend more beach fale trips with your entourage to have some more fun times in Samoa they can remember fondly.

you should have spent a weekend at the host village with your family - they would have had the real deal that you were craving!