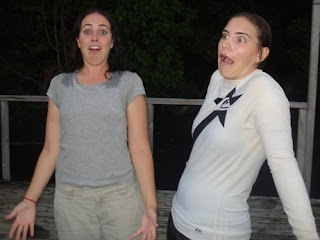 You know that feeling when a weekend or a vacation is so exhausting that you feel like you need another weekend or vacation to recover? I had that feeling lots of times in The States, but being here brings that feeling to a new level. It’s not that we’re any more busy here or that weekend days are so jam-packed with stuff to do; quite the contrary, in fact. It’s more the ruggedness of planning and crudeness of accommodations that make little weekend excursions surprisingly stressful.

It’s difficult to anticipate what part of the trip will be difficult or how to better pack to better manage the weekend. This weekend’s trip to Savai’i seemed like it would be easy enough since many of us were staying at a cheap hotel. So I packed clothes, a towel, some papers to correct, a bottle of water, and headed out to catch the boat.

The chaos of the weekend seeped in slowly; it wasn’t like there was order one minute and the next things were out of control. Like the frog that will sit in boiling water, it’s difficult to notice the ensuing chaos until one minute you look around and you’re on an island with a bunch of young people and no authority figures, and it starts to feel a little too close to Lord of the Flies.

By yesterday afternoon, I had a room, I had food, I had water. As far as Maslow’s Hierarchy of Needs goes, I was good. But as the evening stretched on, it became clear there was no cohesive plan for dinner. The hotel kitchen was the go-to, but it was expensive. Water was $6 a bottle (which is a lot). Someone else took my bed (long story). So there we were, paying through the nose for food, and me with no place to sleep. Where was Maslow now?

Eventually I found a bed to sleep in, and things worked out okay. But it’s crappy when the evening ends on that note. And it really was expensive! Alcohol is always expensive, but on food, water, and shelter, I spent over $100 WST, and that’s a lot for one night; especially for someone on the Peace Corps salary.

I think the taste in my mouth is a little more bitter because this weekend seemed like it would be spendy, and I was weary of that going in. Many Upolu volunteers stayed with Savai’i volunteers rather than at the hotel, but I was coaxed and cajoled into staying. I knew it wasn’t going to be cheap, but other convinced me it would be a good time.

And then my bed was stolen.

So there are some lessons to take away from this. First, it’s always good to pack a meal or two for weekends like this one because there isn’t fastfood readily available in a pinch, and meals like last night’s $18 vegetable curry aren’t in the budget. Second, it is never safe to assume that Peace Corps volunteers have any sort of organized plan. Even if they invite everybody or even if they have some unofficial (or official) “organizer” role. Better to make my own plan. Third, from now on, I hold the key to my room.

All of these lessons were apparent after spending New Years in Falealupo, but sometimes you have to make the same mistake a couple times before you get the point. Oh well.

Sorry if I’m cranky. Yesterday was a really fun day, and there are lots of smiles in the pictures. But I’m exhausted. I could use a weekend. 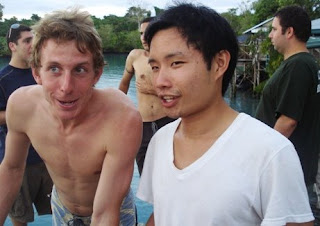 Jim and Supy. Back row is Max, me, and Koa. Probably Max and I are boring Koa talking about religion. 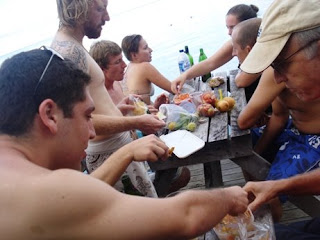 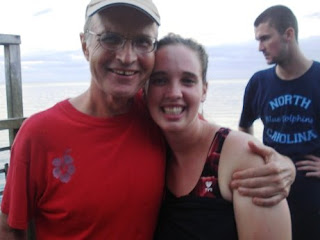 Nick is a volunteer who lives near Phil on Savaii. His arm is around Blakey. Phil in the back. 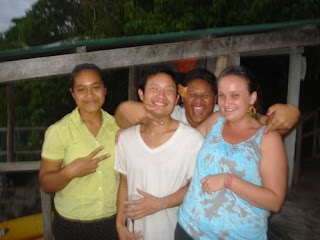 Supy and Briony and Samoans.

awww, i hope you recovered and you get a weekend from your weekend. last fall, i took a vacation from work. i spent a week and a half being a mom. it was great. no vacation from a vacation needed.