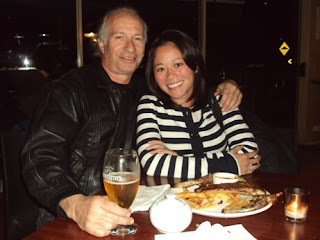 My friend from back home, Ryan, used to go on vacation with his family and make friends with people wherever he went. When he eventually moved to Tucson, he started hanging out at a local pool hall and befriended a bunch of guys who taught him to finer points of billiards. I always enjoyed Ryan’s amiability, and though I found it admirable, it’s not a trait I figure I’ll ever master. But occasionally a situation presents itself where I can’t help but make friends.

We took a bus tour of Waiheke island today. There was a winery, an olive grove, and a beach. In addition to the wine and olive oil tasting, lunch was provided. The weather was great, and it was a fun day. During the tour, we drove past a place called Charlie Farley’s, and part of the tour package included an all-day bus pass. So once the tour ended, Luisa and I planned to go back to Charlie Farley’s. We asked our bus driver where we should catch the bus.

As it turned out, the bus to Charlie Farley’s had left a few minutes before our tour bus pulled up, and there wouldn’t be another for an hour. So as we climbed off the bus, our bus driver said, “Ehhh… just climb back on. Charlie’s is on the way to my house. We just have to stop at the bus depot.”

The bus driver’s name was Ken. Originally from Australia’s Gold Coast, he’s lived in New Zealand for 21 years. At one point it came out that he was born in 1948. Tomorrow is his last day of work before a six-month holiday during which he’s going to Thailand, Laos, Cambodia, and southern China.

When I asked if he’d ever been to Vietnam, he said, “You know, I’ve only been there once, and I’m not really interested in ever going back.” He waited a beat, and then added with a dry wit, “Of course, I should say that was in 1969 and I was there with the armed services.”

While Ken went to turn in paperwork at the bus depot, Luisa and I waited in the parking lot, taking bets on which was Ken’s car. Luisa called it: a white vintage Mercedes.

Pulling up to Charlie Farley’s, he said, “I’m going to go home and get changed, and then I’ll probably come back and join you.” And he did. Between the day of driving the bus, and the additional lift back to Charlie’s, I figured we owed him a beer at the very least. So we sat around and chatted some more and ate the complimentary nibbles from Charlie’s.

We talked about travel and tourism. During the tour he’d made a joke about how 70% of Waiheke’s hippie population left the island 10 years ago, and the rest became bus drivers. When I asked him about that, he admitted he was never a hippie, but that the joke went over well with tourists; especially given his pony tail. We talked about how the scenery on the south island is much more dramatic, but how Christchurch is one of the most boring cities imaginable… but the people are nice.

The people are nice here. Whether it’s been hotel staff or the woman at baggage claim or helpful bank tellers or the bus driver who drove us halfway across Waiheke in his own vintage Mercedes. People who work in travel and tourism are nice because their job demands it, but I’ve been impressed by New Zealand; they go above and beyond.

Anyway, I hope things are well with you. Pictures below. 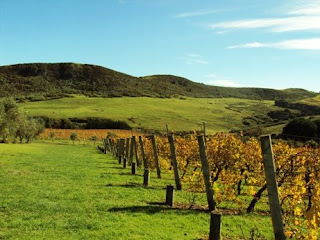 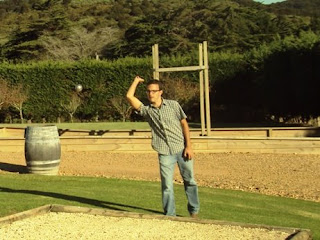 Bocce ball at Wild On Waiheke. 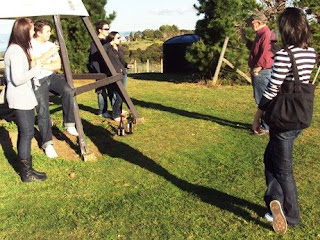 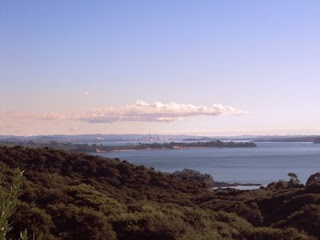 You can see Auckland all the way across the bay from Mudbrick.

Great story. Sounds like you guys are having a great time!

Why do you have a yellow sheep instead of a pink sheep in your masthead with the kiwi?