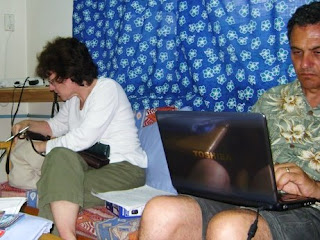 Though my knowledge of most of Samoa is cursory at best, I’ve been playing tour guide all week for my parents. It’s been fun and strange to be in company with non- strangers for the week, and it’s been enlightening to contrast the Peace Corps experience in Samoa with the tourist experience. My parents leave for New Zealand early Friday morning, and since tomorrow may get a little hectic since it’s their last day here, I’ve asked them to guest-blog about their experience in Samoa. So here goes:

It’s Wednesday, so we must be back in Apia. Today I’m going with the flow. It’s cooling off a bit now but that just means the rain is coming – again. I woke up this morning thinking I need a vacation from my vacation. It’s been an adventure daily starting from when we left San Francisco. United was three hours to LAX so we missed the connecting flight directly to Apia. So we wound up in Los Angeles for a day, another day in the air, and another day in Auckland; all meaning we missed two days with Matthew.

This morning we left the island of Savaii on the 10 o’clock ferry coming back to Apia. We spent two days in Savaii at the Lusia’s Lagoon Chalets, a not-too-modern place for a getaway on a beautiful cove with pristine waters. Though we saw only a small part of the island, it is plush with dense green growth and seems further from the world than Upolu, the main island, though Savaii is larger in area. Yesterday, we swam at the Palalaui waterfall. It was raining and it was hard to tell the water from waterfall from the water from the sky. I’m sure the Aussie family that dropped by to see the falls and the rain thought the three people swimming must be a little touched. The falls is over 30-feet high and is a wonder of rocks, caves and flora.

Back at Lusia’s there are fish in the cove so I thought I would engage in a little fishing for catch-and-release or maybe have a few for dinner fried up by the cook. Well, I could not find a place around us that sold hooks and line… on an island that depends on fishing. So the fish are still swimming happily at Lusia’s.

We’re very fortunate that Matthew speaks a bit of Samoan and knows the fares, or who to call if he doesn’t. He’s been able to keep most of the drivers honest.

Samoa has been neither as hot nor as humid as I had expected (feared?). It has rained quite a bit – thankfully mostly we’ve been indoors. However, yesterday we swam for an hour at the Palalaui waterfall while the rain came down in huge drops. Fortunately it was still warm enough to be fun. This place is incredibly green, lush and beautiful. The ocean is so blue. Too pretty to describe.

It has been a busy week — we arrived Friday (after an unfortunate delay) and had a fun dinner with Matthew, Paul, Phil and Supy. It was great to meet them after reading so much about them. What an impressive group! Jane – I hugged Paul twice! I’m so happy that we got to see them before they left for Fiji. It was fun to go to dinner and get a tiny taste of where Matthew has spent the last eight months.

We spent Saturday in the village meeting Matthew’s Samoan family. They prepared a feast for us and I ate a lot more than Matthew indicated in his blog. I had some fish soup, omelet, rice and coconut juice. Everyone seemed happy to see us, and they were very welcoming. Asolima, her cousin, and her brother gave us a preview of the dance they were going to perform at church on Sunday. The two little girls, Akanese and Leme, are beautiful! Joe got to hold the baby and I got to play a game of Popo Mano with Akanese. Akanese also danced for us. She is darling!

On Sunday we went to the English Mass at the Cathedral of the Immaculate Conception. The mothers received ulas, or leis, that had been blessed by the new priest. After communion the youth choir sang a song about mothers. It made me cry. There’s something really comforting about being able to attend Mass anywhere in the world and still feel at home. Later that day we had a great Mothers’ Day dinner prepared by the two most important men in my life! The stir fry was really good and the taro hash browns were excellent. The only thing missing was my precious Amanda.

On Monday we went to the Baha’i House of Worship – one of only seven in the world. The grounds are beautiful and the atmosphere is reminiscent of Holy Family Motherhouse – definitely a spiritual place. Monday afternoon we took the ferry to Savai’i. At Lusia’s Lagoon Chalets, Joe, Matthew and I were assigned the Honeymoon Suite. What fun! They were filming an ad to promote Samoan tourism so at dinner that night we got to see an impressive floor show featuring Miss Samoa 2003 and an Australian newsreader (Tracy Spicer).

Tuesday we swam in the lagoon then Joe and Matthew went kayaking and snorkeling while I read on the dock. Afterwards we took a taxi to the waterfall and then returned to Lusia’s for a yummy dinner.

Today we took the ferry back to Apia and finally made it to Skippy’s and did a little window shopping at the flea market (can you window shop if there are no windows?). Tonight we went to Giordano’s with Blakey where we ran into Koa and his parents. We drank a little Australian wine and had some delicious bleu cheese pizza.

I can’t believe that tomorrow is our last day in Samoa. The time has gone way too fast. On the one hand I’m grateful that we got to see where Matthew is living and to meet some of his friends. It will definitely make it easier to imagine what his life is like here in Apia. On the other hand, being able to spend some time with him will only make it harder to be so far away. While intellectually I totally support what he is doing, the mom part of me wishes he were closer to home. I’m very proud of what he’s doing but my heart hurts at the thought of the continuing physical separation.

That’s all for today. Hope you’re well. Pictures below. 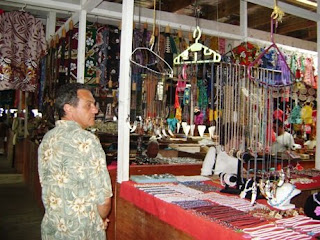 At the flea market. 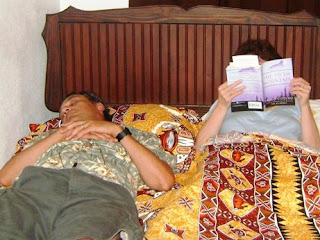 Patty you made me cry! Ive been thinking about you all week spending time with Matthew, how great it must be to see him and hard it will be to leave him.
I did notice how you and Joe both approached the blogging experience from different perspectives though. Joe was all about the what you were doing and you were all about the people. And Matthew is about both.
Cant' wait to hear your stories and hopefully see some pictures when you come home.
Safe journey.
And Matthew I look forward to your stories each day.You don't seem so far way.