Getting Cozy on Savai'i 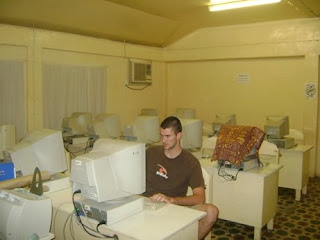 The past two times I’ve come to Savai’i, I’ve brought my computer with me in part to blog, and in part because I feel like it’s safer when it’s near me. But I’m a little unclear on the plan for today; I don’t know where I’ll be staying and there’ll probably be swimming in the ocean, and I don’t want to have to worry about who’s watching the bags. So I decided to leave it home for this trip.

I figured I could use Phil’s laptop to draft a blog for today since there’s only one computer in the Savai’i office, and it’s usually in high demand. Phil thought it would be better to just use one of the computers in his lab. So here I am.

My lab and Phil’s lab are incredibly different. My lab is long and narrow, approximately 50’ × 20’. Phil’s is a much smaller room, maybe 20’ × 20’. I’m not saying that mine is better. In fact, I’d imagine Phil’s lends itself much better to having a more cohesive class.

Mine has high ceilings and sound echoes, and the effect is something like being in a small auditorium more than a large classroom. During my year 13 class, which only has 6 students, I try to block off a portion of the room using the rolling whiteboard, but the room still feels too big for the intimate class size. I still have to talk in a loud voice, which feels wrong.

If I had a class of 6 in Phil’s classroom, I wouldn’t have to project. I could use an inside voice. It would feel cozier. In fact, cozy was the first word I used when I saw his classroom. And I meant it in a good way. My room feels large and cold (although that could just be the air conditioner).

Or perhaps my personality is just too small to take up my entire classroom. With my year 12 students practicing for the upcoming CAT, I often feel like when I’m at one end of the classroom, I’m so far away physically from the other end of the class that I might as well not be there.

If my lab had cubicle walls, each workstation would easily be big enough for a pretty roomy cubicle. In fact, my classroom is much bigger than the research area at eCivis when the office was still on Colorado. Maybe I should set up a new grants sweatshop afterschool. If nothing else, it would help the students with their copy and paste skills.

And with my year 11 classes, which average 41 students per class, it feels like even more of an auditorium. And it makes discipline a little unwieldy. How do you keep 41 kids in line when there’s just so much space? I mean, I use the acoustics to my advantage—the insane echo makes it so only slightly raising my voice goes a long way. A simple “Ay!” can get the classes attention fast.

Also, there’s no way that Phil could cram 41 students into his classroom. Once again, I don’t think this is a bad thing. Really, I don’t know that having 41 students on 12 computers is beneficial to anyone. If my room were the size of Phil’s class size would become a much more obvious issue.

It’s kinda cool that I was in Blakey’s classroom last Saturday, mine during the week, and Phil’s today. It’s good to get some perspective on how things could be different and even without seeing Phil or Blakey teach, I’ve gained some ideas for how I could do things differently in my lab.

And I’m half serious about the grant research sweatshop.

I hope you’re enjoying the weekend. Pictures below. 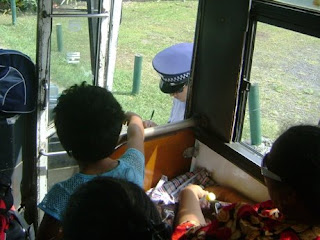 My pasiova'a, the bus that goes to the wharf, getting a ticket for having too many people on board. They don't make anyone get off. Just the ticket. 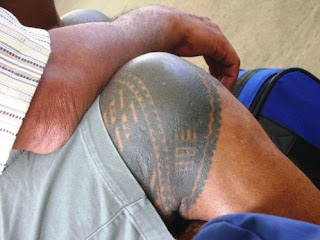 The knee of the guy sitting next to me at the wharf. It's so black. Like a huge black scab. 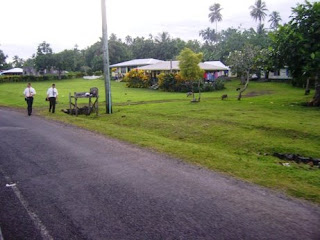 The two Mormons who live in Rosie's village. 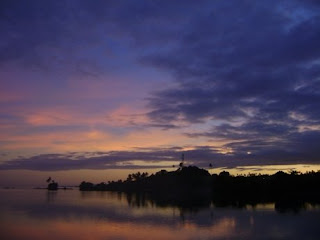 The view out Phil's back door. No joke.