We're Not in Kansas Anymore 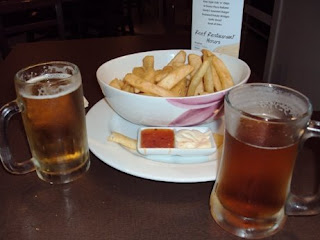 When Peace Corps get together, one of the inevitable pastimes is bitching about all of things we miss about America. Someone usually sets off the conversation with a simple statement, apropos nothing, like “You know what I miss? Carl’s Jr.” From there, long debates are sparked about the minutia of American life. Carl’s Jr. vs. Hardy’s, Hardy’s and Carl’s Jr. vs. Jack in the Box, White Castle absence on the West Coast, In-N-Out’s absence outside of California, Nevada, Arizona. With all this, you’d think it wouldn’t be so difficult shaking off the Samoan lifestyle. But it is.

There was an advertised happy hour at a bar in Paihia last night, and we stopped in to have a couple drinks. For the first round, the bar tender calculated our tab to be $6. I had a $5 bill and a $1 coin. Done and done. When we finished the first round, I went back up and ordered another round plus some fries. $11.50. I handed the bartender a $20 bill, he gave me my change. Transaction complete. It wasn’t until I got back to our table with the second round when I remembered the custom of tipping.

See, in Samoa, there’s no tipping. In fact, I’ve heard it’s a bit offensive to tip (That could definitely be wrong). But neither at bars nor restaurants is tipping customary. It was an easy to kick the tipping habit; financial incentive gets a habit dropped fast. But getting back in meant another change in mindset.

This was one of the more blunt and awkward changes I’ve run into. Others are smaller. Taking Spanish in high school and college, up until joining the Peace Corps, my first impulse when talking to someone who doesn’t speak English is to speak Spanish. Clearly people from China don’t speak Spanish, but my brain’s first impulse is to go to the only non-native language with which I’m familiar.

Coming from Samoa, the effect is the same, except bigger; instead of wanting to speak Spanish to foreigners, I want to speak Samoan to all strangers. This is particularly ridiculous here since a.) everyone is a stranger* and b.) everyone here speaks English. So whereas my brain has adjusted to use “Tulou” as my go-to when I bump into someone on the street, I now have to convert back to “Pardon me” or “Excuse me,” which has been surprisingly difficult.

Another example is in Samoa, you’re not supposed to eat or drink while standing. This took some getting used to when we arrived back in October, but it’s hard-wired into my brain now. So the few instances it’s come up here, my first impulse has been one of guilt and nervousness , the same feeling you might get from inadvertently changing lanes in the middle of an intersection or making a U-turn in a business zone or whatever other menial-but-somehow-important law.

But the problem with all this now is that I’m neither in America nor Samoa, and who knows what New Zealand-ish cultural idiosyncrasies I’m violating. Hell, using the term “New Zealand-ish” is probably a violation in itself. Oh well.

I hope you’re being culturally sensitive. Pictures below. 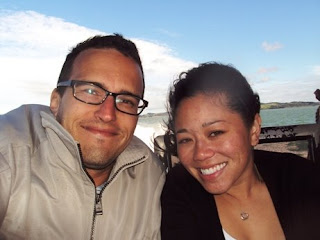 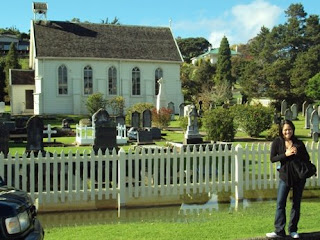 Killing time at the cemetery in Russell. 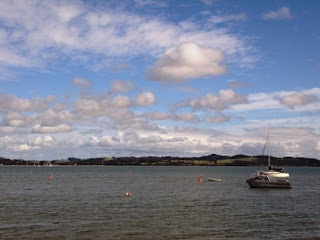 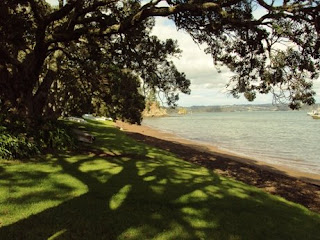 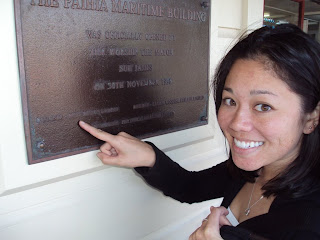 Pointing out the unfortunately named Butt Design Limited. Click on the image to see it bigger. 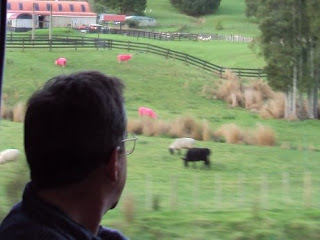 Tipping is not customary in NZ either....you really dont have to do it, I know the hospitality workers in NZ love the Americans because they alway do it out of habit.

Luisa is a Samoan name. I know she is American, but are her relatives from Samoa??? I have this suspicous feeling she is not from Samoa.

i'm surprised the bartender didn't decline the tip...not an NZ custom either...i never saw pink sheep in NZ! that's a new one!! you & Luisa are SO cute too!! ;)