"Heads Up Seven Up" Anyone? 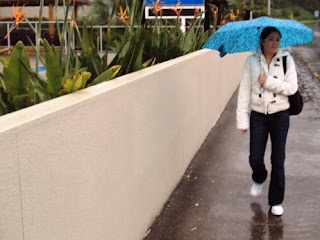 When most Peace Corps from Samoa come to visit New Zealand, they engage in some sort of extreme sport. In fact, when most American twenty- somethings come to New Zealand it’s either to hike the trail to Mordor (nerds) or to do some sort of street luge or dune luge or rock luge or bungee jump or bungee fall or hang glide or para glide or bungee glide or whatever. I was never a fan of the Lord of the Rings trilogy, and though I’ve been bungee jumping and sky diving in the past, they’re not piquing my interest on this trip. Looking at the price of things, we decided to mostly stay in Auckland with today’s exception of heading up north to Bay of Islands.

Paihia is a cute little town situated right on the bay. In fact, the walk outside is scenic beachfront. Too bad it’s pouring rain outside. The Bay of Islands website suggests that the bay’s weather is more temperate than most of New Zealand’s since it’s farther north and therefore closer to the equator. It sounded like just the destination for a trip during New Zealand’s late autumn. I guess weather is always a roll of the dice. So here we sit in rain Paihia.

But who needs scenery when there’s real television and internet to take advantage of? I just caught the second half of “Law and Order” rerun, which was bittersweet: I got to see McCoy all smug at the end, but I missed Jerry Orbach’s joke at the beginning, which was always my favorite part. Now we’re watching some backlot bash edition of Ellen DeGeneres’ talk show. “It looks so nice there. I want to go to there,” Luisa just said.

Earlier I indulged in some YouTube, an internet treat that most connections in Samoa don’t allow. Luisa’s compiled a list of internet videos she considers must-see. I watched the Tim Lincecum MLB 2009 commercial where he’s giving his laconic video game counterpart lessons on player etiquette. It was clever. We also watched a Sesame Street segment that featured Will Arnett doing magic tricks a la G.O.B. Bluth. It’s pretty ripe with Arrested Development inside jokes, which is fun.

The bus ride from Auckland to Paihia was a pretty good time as well. Listening to podcasted “Wait Wait… Don’t Tell Me” and looking out the window, we saw plenty of sheep. At one point, we saw a lea full of hot pink sheep. They were moving, so I’m pretty sure they were real, but they were never explained. I hope we get to see them on the ride back to Auckland.

Until then, we’ll be hanging out in this rainy beach town. Paihia is a lot like Laguna Beach or Sauselito or Martha’s Vineyard (although I’ve never been to Martha’s Vineyard, so who knows really?). It’s small with lots of little shops that sell souvenirs and art and antiques and ice cream and jet ski rentals.

There are lots of day and half-day boat cruises that offer guaranteed dolphin sightings, and many travel books and websites strongly recommend getting on at least one boat while in town here, but with the rain, I think sightseeing tours are canceled for the day. So maybe tomorrow. Or maybe we’ll just watch more Ellen. At this point, watching TV is sightseeing for me. 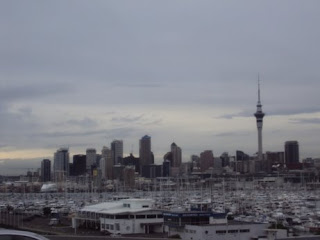 Auckland skyline (I took this from the bus as we were crossing the bridge. Not sure how it came out as nicely as it did.). 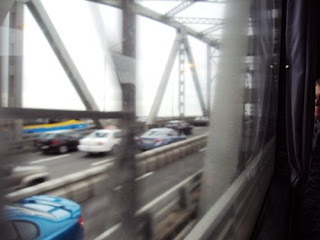 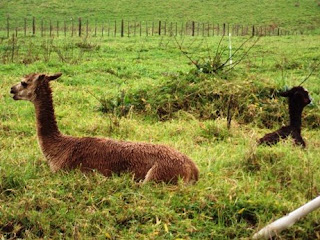 During a water/pee break from the bus, we stopped off at a cafe, and there were llamas chilling in the neighboring field. 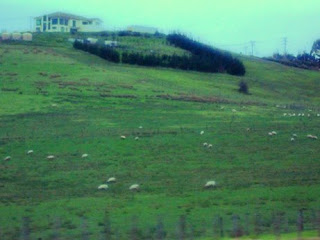 Sheep as seen from the bus. None of the hot pink variety though.

Sad that the weather is not cooperating. I'm glad you're finding ways to amuse yourself. Are you missing the Samoan heat? I am! Sunday here felt like New Zealand - cold and gray but at least no rain for us. Does Luisa think she's in Seattle?

i hope you get a picture of the hot pink (or other color) sheep!

Are you sure the sheep weren't majenta! LOL

i'm more offended by your "Lord of the Rings" comments then by any of your Mormon comments!! LOL!
(i think you should revisit that trilogy!)