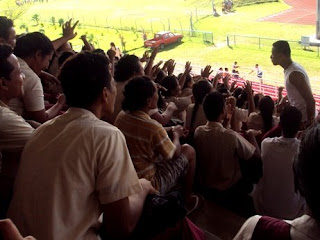 My high school ranked very low on the school spirit meter. The size of the visiting crowd at our football games often rivaled the size of the home crowd, and fans responded to cheerleaders with eye-rolling. In fact, my junior year, Ryan convinced the water polo team to paint our chests to say “LOGAN” and construct makeshift toy horses (our mascot was the Colts) that we “rode” around the track during half time. I came from a place where school spirit was a self-aware mockery.

It’s weird to come into places like college in The States and my school here in Apia where much pride and emotion are invested in the outcome of a football game or the performance of a track team. In the rules for the Interchurch Athletics Meet a couple weeks back, it was explicitly stated several times that “Principals are in charge of monitoring their school’s fans and keeping student singing under control.” The idea of raucous, unruly singing seemed like a funny idea, but after several athletics meets, I’m starting to get a better feel.

From what I can tell, my students cheer in much the same way. There are a bunch of cheers that everyone knows, and everyone just falls into line when someone gets a good one going. That said, their cheers are longer and more song-like. Many are chants, but there are a few that have melodies, most of which were taken from English songs and re-written with Samoan lyrics. At today’s Zone A Athletics Meet, I heard “The Banana Song (Day-O)”, “The Limbo Rock”, and “We Will Rock You”.

When a coordinated chant happens to align with an unforeseen exciting athletic event, chaos can erupt. Should the deejay throw on Kelly Clarkson’s “Piece of Me” at that moment, it seems possible that some students’ heads may explode.

Part of the reason for the heightened restrictions on singing comes from the fact that several fights broke out after high school athletics in 2007. The sport went on complete hiatus in 2008. So things this year feel a little tentative.

Students are also not allowed to wear their uniform more than an hour after school gets out because there have been fights between students of rival schools at the Fugalei Market. Part of it arises out of the unofficial school hierarchy, but a large part is pride, loyalty, and spirit. And ambition, courage, skill, scholarship, and faith… right, Trojans?

That’s all I got. Odds and Ends tomorrow, and then back to regularly scheduled programming. More Cultural Exploration in October. 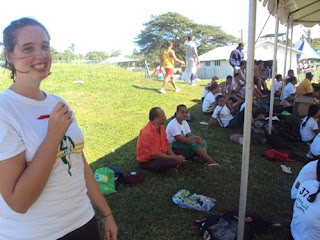 The grandstands. Click on it for the bigger picture. You can see schools sitting because uniforms make it easy to discern. With everyone concentrated in the same area, it's easy for things to get crazy. 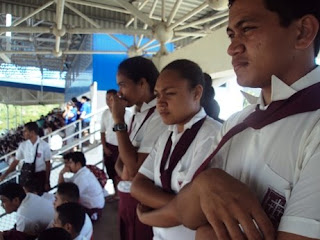 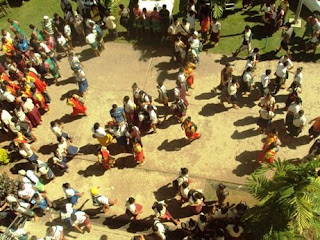 Hey Matt, we don't know each other but I'm a friend of Paul's in Minnesota. Haven't heard from him in quite a while, can you tell him hello and tell him to write directly or to the StrumMn blog, please? We're wondering how he's doing...
Brian

The Samoa insterschool athletics were the biggest school event I had in the 80's. I saw a guy ran 10.42 sec 100M dash barefoot. awesome! Then Ben johnson ran 9.87 in Seoul so Davy's run didn't seem all that anymore, plus he choked at the Champ of Champs meet. The best part were always the cheers.