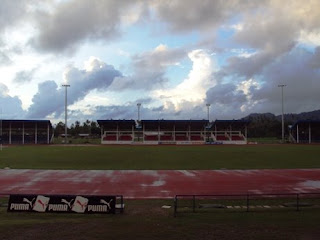 “Beloved” is a terrific book, and I highly recommend it. Toni Morrison writes with passion and urgency and incredible poetic metaphor. Symbolism abounds in her writing so much so I began referring to strange symbolic moments in my life as “Tony Morrison Moments”. An example of this was when my dad, my sister, and I were painting her bedroom, and after I got frustrated with the two of them, I went to wash the paint off my hands. As I scrubbed, I heard Toni Morrison’s narrative describing the handwashing, the cleansing, the drowning and the baptism in one. It’s like that. Anyway, I feel like my experience at the Interchurch Athletics Meet today was a daylong Toni Morrison moment.

Earlier in the week I was assigned to be Assistant Chief Record Keeper (Assistant to the Chief!). I was record keeper at our intramural track meet a couple weeks back, and my pule asked me to record results on my laptop. Though Vaifale sat next to me and did much of the work by hand, I was able to give my pule a print-out of the showing race times and who placed where. It was convenient enough.

When I heard about this role though, I thought of the morning I showed up at school and my pule asked me to use my laptop. I figured this time around I would do a little prep work this time so I could be a little more efficient with my laptop record-keeping. We were given a preliminary program at Tuesday’s meeting, so I input all the student names and set up a little function that would automatically track the score of each division (Junior, Intermediate, and Senior of Girls and Boys).

Computerwise, the day was a lot more mediocre. When I told the Chief Record Keeper I brought a laptop, she was excited. “That’s very good!” Yet there were 5 other assistants who were there to work, and it was a bit awkward to displace everyone with a machine that would do their work for them. The computer had problems of its own. I ran out of battery about halfway through the day, and it was a struggle to find an outlet. At the end of the day, I was writing down the final scores as dictated by my computer, but for the intermediate boys division, we used the scores of the lady who had done the work by hand. Was it worth it to bring the computer? I guess so. But it didn’t change much, and I don’t think anyone will see the need for a laptop after I leave.

Koa was working the gates and Phil was chaperoning his team, so we all had to get up at 6 a.m. to be out the door on time. From a spectator perspective, the day was really fun. The event was held at Apia Park, which was recently remodeled for the 2007 South Pacific Games, and the stadium is beautiful. It was fun to see a lot of my kids competing, although it was cool to chill with the non-competitors in the stands as well. During lunch, I could have gone to find Koa and Phil, but it started to rain, and a bunch of the teachers from my staff came and huddled under the record-keeping tent, and I was enjoying the company of the other record keepers anyway. And even with the computer headaches, I still had a good time.

A great day, but the ambivalence of the computers... I can hear Toni Morrison’s narrative once more.

I hope you look for metaphor in your life. Pictures below. 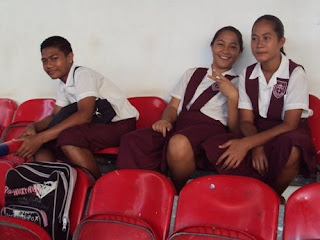 Year 10s who showed up early, sitting in the bleachers before the day's events. 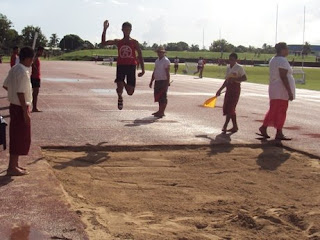 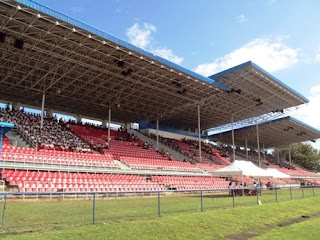 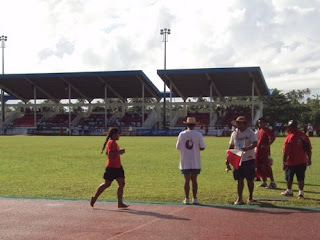 This girl in the junior division is running in the 1500 meter event. Yes, she is barefoot. 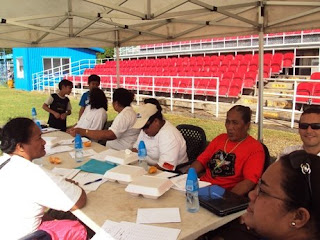 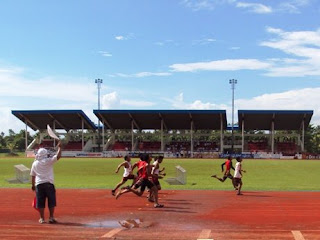 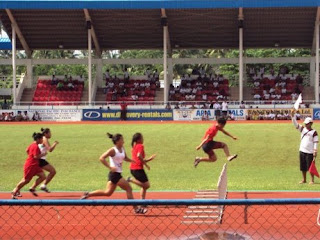 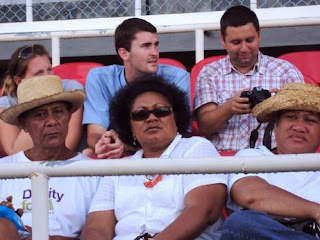 Looks like a very fun day! But running barefoot? Not so much fun.