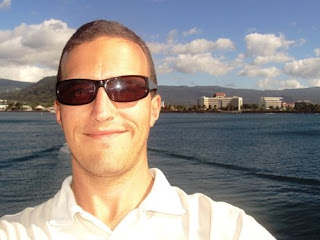 Yesterday Filifili mentioned to me he and the rest of the year 13 history class were going on a boat after school. He laughed a little when he asked if I wanted to come, and so I thought he was joking. Blakey gets invited on all kinds of field trips; me, not so much. I was heading back to my house, so I told him and Mira to come and find me when it was time to go. They never did, which I was fine with. I had things to do.

But then they all ran into me at the Internet café an hour and a half later. It turned out they were going on the USNS Richard E. Byrd, and while I’m not normally interested in naval affairs, I was bummed. It turned out the invitation was sincere, and being a fly on the wall while Samoan youth are exposed to the American military sounds fascinating. One of them had a cell phone with a camera, and they showed me the pictures they took. I was bummed.

Filifili came back to my room this afternoon to inform me that the boat is open to the public until Friday. “Well we should go,” I said. “Tatou o,” said Fili. I shut down the lab and dropped off my backpack at my house, and we headed down to the wharf.

Before today, the closest I’ve been to the wharf is a small restaurant half a block away, so I’m unfamiliar with which gate we should use to enter. Fili seemed almost as clueless, and I realized I had no other evidence the ship would be open. But whatev. The excursion was free.

We finally found the right gate, and Fili said something to the guard in Samoan. The guard shook his head. I thought we were done. But then we were handed visitor badges and told to wait for a van that would drive us to the ship. A bunch of students from Samoa college and a man and his daughter waited for the van with us. It showed up promptly.

Though Apia is much smaller than Baltimore, the cargo docks look a whole lot like Season 2 of “The Wire”. There are stacks of cargo containers and lots of cement and grizzly horse-faced men. No Sabotkas though.

We dropped off one man at his car, which was parked on the docks near the Navy ship, and Fili started to climb out when the driver told him to stay. Fili climbed back in, and we started driving to a different ship. The docks are fairly small, and it’s rare to see 2 ships parked there at once, but it turns out that a second ship fit squarely on the dock just behind the Navy ship. It was not a Navy ship though. In fact, it was—wait for it—a Greenpeace vessel.

By strange coincidence, both happen to be parked in Apia Harbour right now. The small Greenpeace boat, the Esperanza, is dwarfed by the towering USNS Richard E. Byrd, but it happened to be the one giving tours today. It felt similar to showing up to watch a NASCAR event that turned out to be a Peter, Paul, and Mary concert. Potayto, potawto... Right?

Whatever. They were both boats. And Filifili hadn’t toured this one yet, so it was just as well. I wore an ’ie because I thought it a good way to distance myself from the Navy, but it turned out to be useful in distancing myself from the Greenpeace kids too. Don’t get me wrong, Greenpeace does great things. But they’re more scraggly than the Peace Corps, which is impressive. And one girl was playing a lute, which I found odd.

Appearances aside, they were very nice. Our tour guide was an American who was part of the skeleton crew. The skeleton crew is always on the Esperanza, while the campaign crew rotates each tour. On the current tour, the boat is going around the South Pacific as a way to gain research and insight for the upcoming South Pacific environment conference to be held in Cairns, Australia in December.

In addition to goodwill, the boat also occasionally participates in “activities,” which is when they get confrontational with other seafarers who are fishing illegally or otherwise harming the environment. This piqued the interest of a bunch of the people on our tour, but the language barrier prevented much detail from being divulged.

Oh well. Maybe I can hear about that next time I try and tour an Air Force carrier.

I hope life’s keeping you on your toes. Pictures below. 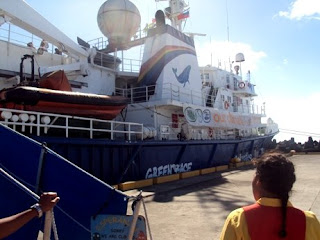 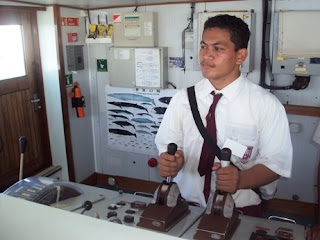 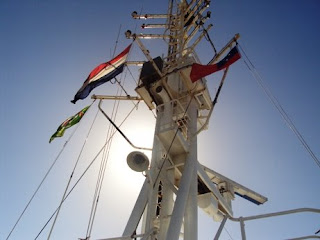 Flags from left to right: Greenpeace, The Netherlands, Samoa. Greenpeace is based in Amsterdam. 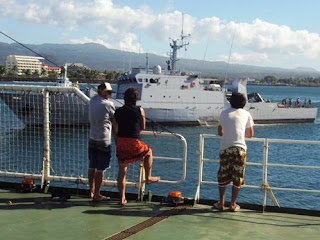 Greenpeace kids watching one of the Navy's smaller boats. 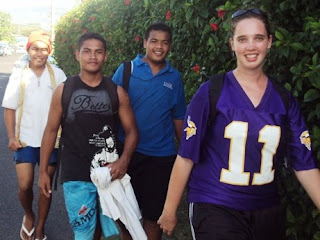 On the walk home, I ran into Blakey and her football players. That's right. Blakey's coaching American football.

Labels: Americans, Apia, Out and About

Samoans love football. Go Blakey and Vikings!!! Favre would have won another Super bowl if he had not thrown that interception agains the those 'aints(Saints). Very depressed afterwards.