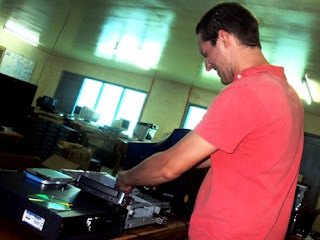 I’ve been having some trouble with my external hard drive, and when I ran into Cale and Sara last night, I agreed to come and help them with the ARK computer shipment in exchange for Cale’s expertise on my external hard drive. Since the Congregationalists finally decided to cancel school for the rest of the week, it’s not like I had anything better to do with my day, and Cale and Sara are good times, so I headed over this morning.

My morning was rather lazy, and the day seemed a little daunting when I woke up, but it turned out Supy was planning on picking up his allotment of the computers, and he called and asked if I wanted a ride. His pule and a bunch of the matais from his school committee were in town with a van, so the ride would be more comfortable and faster than a bus.

Supy was supposed to pick up 30 computers, but as soon as the guys from the school committee saw the 30 system units and 30 monitors, they realized their van was far too small. So they left to find a more sizeable form of transportation, and they never came back. Supy stuck around to hang out and get a crash course in using a Linux server.

I “helped” Cale. I put that in quotation marks because I was not a helpful helper. While I am good at using computers, I am a novice at anything involving setting up a new system or working with hardware. This meant poor Cale had to walk me through every step of process and explain things so basically that it’s unclear if my presence was useful at all.

In Jonathan Lethem’s “Fortress of Solitude” the main character talks about the trick to doing a new drug is to pretend it’s not your first time. I employed the technique today to mixed results. I figure getting the shell off was the first step, but once I was finished with that, I had little idea of how to proceed. It felt like I was lost in an unfamiliar place. Like I could hear crickets chirping.

Cale was pretty good about allowing me to maintain some semblance of dignity. When I went to plug the drive in, the plug was upside down, but hell if I could tell. “I think that’s upside down,” Cale said gently. Oh right. Sure. I knew that. I totally know what I’m doing.

I got moved to configuring the server via a Linux terminal. I don’t really know anything about Linux, so Cale mostly stood behind me dictating commands. “Type ‘sudo.’” Cale said.

“No. Spell it the dumb way,” Cale said gently.

Eventually I got through it, and Cale pointed to the next machine. “Now do everything we just did on this one,” said Cale.

I sat down and looked at the maniacal blinking cursor in its deafening silence. It was like I could hear crickets chirping. 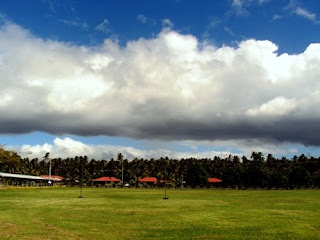 This was the sky when we walked out of the computer lab at the end of the day. "That's good clouding," said Cale. 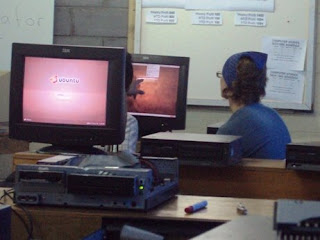 Supy and Sara looking at the Ubuntu operating system. 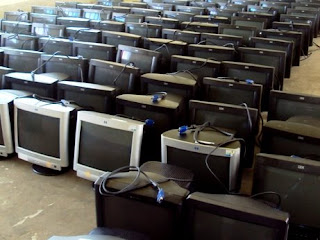 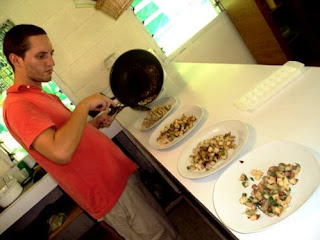 Cale and Sara claimed they had no food. And then they made a fantastic lunch. Skilleted onions, bacon, potatoes, and basil, and corn on the cob. It was the kind of trick my dad is really good at pulling. 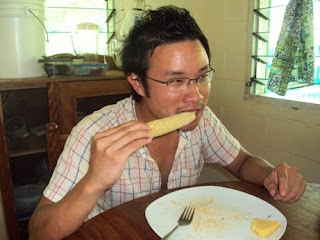 Supy eats his corn on the cob very particularly. Also like my dad. And my sister.

Labels: Information Technology, Out and About

Definitely true about your dad...he can make a meal out of what seems like nothing, while attending to everything else around him. By the time you get home, maybe you'll be able to put together a computer out of nothing...or not. Miss you tons.

You know, Cale is exceptional that way, at NOT making people feel stupid, and being gentle in situations that make it okay, when it could be embarrassing to folks. Nice to see this recorded for posterity.