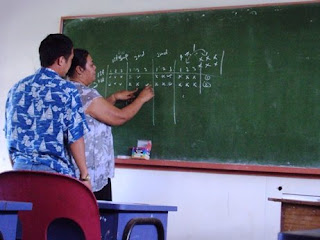 I ran into Jordan at the Internet café last week. We chatted a bit, and he had noticed my school’s athletics intramural day had already happened and he’d seen the students training for the upcoming Congregationalist school championships. Jordan was a pole-vaulter back in The States, and he was so excited about his school’s athletics program, he was jealous that mine had already begun.

The thing is, aside from the events being the same, the athletics program at my school is nothing like the track and field program at Cesar Chavez Middle School back when I ran. The season is so short. When I ran, we had at least 6 meets before the main championships. There was lots of time to improve, to feel the thrill of competition, to be able to make up for a crappy day. But here, we had one intramural meet, and that was it for most kids. From there, we have one meet for the church schools. And then one nationwide meet. It’s over so fast.

I mentioned this to Blakey. “I feel kinda sorry for Jordan. I feel like he’s a lot more serious about this than Samoa is.”

Blakey corrected me. “Yeah. Or at least they’re not serious in the same way.”

It was a point well taken. To say that Samoa isn’t serious about athletics is foolish. In my experience, people are very serious about athletics. With the inherent intensity of all students being three wins away from being a national champion, the pride stakes are sky high. In fact athletics was banned last year after tensions rose so high that fights were breaking out between rivaling schools. It may be a short season, but the intensity is jam-packed.

It’s a big deal among staff too. I remember when I used to referee youth soccer, there was a guy, Chuck, who did referee inservices. He could talk for hours about the finer points of FIFA regulations. The meeting of athletics officials yesterday was no less intense.

My official title at the meet on Friday is assistant to the Chief Record Keeper (there are six assistants, so I’m not special.). Many other teachers from my school have responsibilities so we all headed to the meeting yesterday. The meeting was only an hour and a half, but there was much time to explore the minutia of athletics. There were bits and pieces in English, but most was in Samoan. Nonetheless, the tension in the room and the tedium with which speakers and coaches and representatives spoke, it was clear we were splitting hairs.

We also had to staff the jumping and throwing events and go over how runners times would be recorded. Quite literally fielding the field and tracking the track. And then we tracked the field and fielded the track. The homonym fun was the saving grace of the meeting in my opinion.

The climax came when Apong, the Indian missionary from my school, raised his hand to inquire about what to do when jumpers tie during the high jump. Someone answered the question. Another disagreed. Apong voiced skepticism. The leader of the meeting got out the chalk. The original answerer answered some more. It was clear as mud. Apong felt his question was either being misunderstood or brushed aside. More chalk. More answers. More questions. Pictured above.

All in all, it was a pretty awesome preview of the intensity to come. The meet is on Friday. Koa and Phil will be around as well. Should be good.

I hope you’re on your mark. Pictures will be posted momentarily. 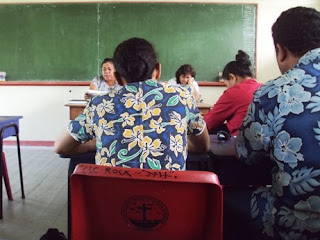 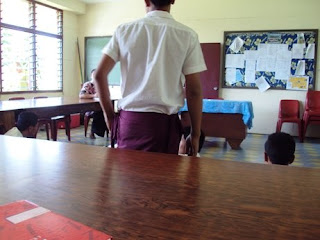 My school had uniform checks on Monday, and nearly half the school was put on detention, and many kids haven't been back to class since. The process for coming back involves sitting on the floor of the staff room while the pule looks you over and determines whether or not you're fit to come back. 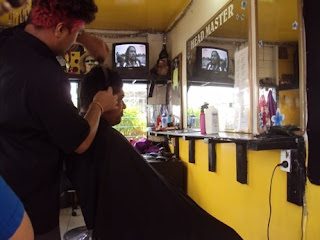 Manu Samoa / Fiji rugby match on TV while I was waiting to get my haircut last Friday. 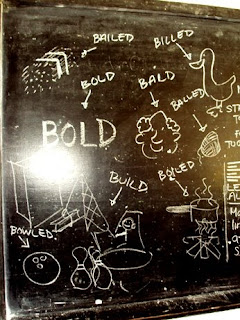 While teaching 9.3 yesterday, I noticed that one of the boys in class had the word "bald" written in his notes rather than "bold." So occasionally in class I would draw another English word that starts with B and ends with the LD phonetic. It was fun and it passed the time.

I love the blackboard shot. You're artistic ability makes me smile.