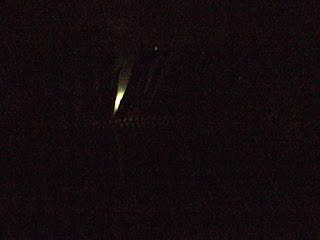 The mere fact that my house has internet officially dampens the ruggedness of my Peace Corps experience. I admit living in Apia makes my experience sort of Peace Corps Lite. And if that wasn’t enough, when I got home this evening to find my power out, I took my laptop and walked 10 minutes to Aggie Grey’s so I could blog and wallow in electrically generated power. So here I am.

It seems like my reaction isn’t all that different from local Samoans—okay, so they’re not hanging out with me on the Internet patio, but as I walked past houses on the way over, everyone was hanging out outside. And when I finally got out to the sea wall that goes around the periphery of the harbour, it was almost crowded with people.

Mari’s, a shop that’s somewhere between a faleoloa and a grocery store, had generator power, and many people along the wall were sitting in the dark munching on kekepua’a. I do have $7 WST in my pocket, and I was tempted to join them. Maybe later.

I should point out that the connection speed here is vastly faster than it was yesterday. Perhaps someone here read yesterday’s post, ran out and got a better wireless router, and then knocked down a power line to get me back in here. Well, you got it, Aggie Grey’s. I can vouch that all 20 of this week’s podcasts were completed within the first 10 minutes of my connection. Impressive.

Being in the middle of a power outage definitely raises serious questions about my emergency preparedness. I realized I have no candles in the house, so my options for generating light were the LCD flashlight on my phone (which currently has only 2 bars of power), the mosquito zapper’s UV light, or the pilot light from the gas stove (which I only mention jokingly, Mom). So really, if this hotel wasn’t here, I don’t know what in the hell I’d be doing. I guess I could have pulled out the guitar. But beyond that, I probably would have just gone to sleep early. After making peanut butter and jelly by pilot light, of course. Oh, and I do have a battery-powered radio. So there’s that.

I thought about calling Blakey or Erik to see what they were up to, but the power grid in Samoa is very strange, and though Blakey lives nearby, it’s not really economical for her to come down the hill or for me to go up. It’s sad though, because the power going out at the apartment in San Francisco always gave us an excuse to break out board games. I enjoy board games. I beat Chris at my first game of Stratego while the power was out. I wholly admit it was dumb luck, but it was a good time.

Anyway, my time with the Internet is coming to a close, and it’s time for me to head back to my dark house. I may break out the cards for some non-digital solitaire. Or I might turn on the radio and go to bed. But probably I’ll wander down to the sea wall and check out the kekepua’a from Mari’s—if there’s any left.

I hope you got candles around. Pictures below. 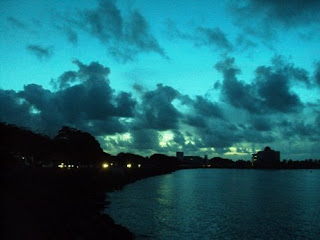 Blacked out Apia. Car headlights and the setting sun are the only lights. 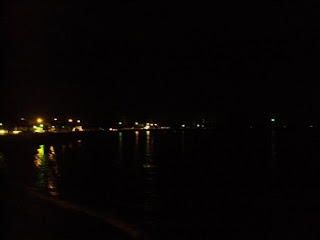 Apia with lights after I originally published today's post.
Posted by Matthew at 8:00 PM

We are so lucky in this country that even if the power goes out, it is never for long. So, as a result, we don't have the back up resources we should have....like an alternative cooking source, or flashlights whose batteries actually aren't dead, or back up generators for the sump pump so basements don't flood. Your blog is a wake up call to all of us today. Maybe I should make sure I have charcoal for my grill at least....

Hi Matt,
We also had the blackout Tuesday, broke out the Southern Comfort, crackers and cheese AND ENJOYED THE EVENING. We have candles, a gas Weber BBQ and a metho camping stove. Check the Blog
www.pacificadventuresamoa.blogspot.com
enjoying the little things of Samoa
R&F