Back to the English 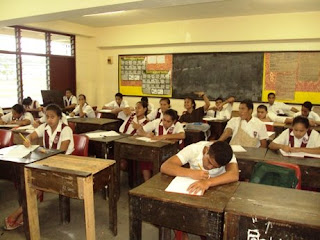 I remember once while my friend Elizabeth was doing the Peace Corps in Guinea (where they speak French), she came home to visit once and I asked her if it was weird to be speaking English. “Yeah. A little. I guess,” she said. “Not really, but a little bit.” I always imagined the brain would have a difficult time recalling obscure vocabulary or maybe phrasing and syntax would be difficult after speaking a foreign language for a while. But now that in my experience interacting with native English speakers after a long time in the cold, I think the issue is less about the actual nuts and bolts of language and more about style.

I’ll be the first to admit that I live in Apia, that I speak English a great majority of the time, and I Skype frequently with The States. That said, most of my daily interaction with other humans is chatting with my staff or teaching high school students, none of whom are native English speakers.

Communicating across a language barrier forces changes in the way one speaks. I definitely annunciate differently and I think I talk more slowly. There’s also a different voice inflection that is used in Samoan that inevitably carries over into English. Supy is a little inflection chameleon. I think he was the first during training to start using the Samoan “question” inflection, which he still uses prominently to this day, in English and Samoan, even when he’s not asking questions.

The JICA in town are fascinated by Supy, and Supy is the chattiest volunteer in Samoa, so he winds up talking to them whenever he’s in Apia. Consequently, he has picked up the Japanese-English inflections and occasionally slips into those. When Phil’s friend Robby came to visit last month, we were at the river fales and Phil mentioned that we might see Supy that evening. “SO nice,” said Robby, doing an uncanny impression of Supy’s Japanese-English inflection.

In any case, I’ve adopted another technique. When I notice a student use a particular English word, I make a mental note, and my brain stores it in a special go-to lexicon. It’s not scientific by any means, but I think my brain figures if one Samoan kid knew the word, chances are good that others are familiar with it too. So should the need arise, that word is mentally flagged as communicating that particular idea well.

This works well in teaching, not so well when moving back across the language barrier and speaking to a native English speaker. Last Friday during the morning assembly, Afoa noticed I wasn’t wearing my Independence Day uniform, so she asked, “Have you even gotten your shirt stitched yet?” While I told her I hadn’t, my brain locked on the word “stitched.”

Cut to this afternoon when I finally walked into the tailor shop. The man at the front referred me to the “seamstress” in the back. The lady was older and clearly a New Zealand transplant. She smiled at me and I said, “I want to get a shirt stitched.”

I was the deer in the headlights. What’s the real English word for this?
She tried to help me. “You want us to repair your shirt? Did you rip it?”

Finally I broke through with lowest-common-denominator caveman English. “I have material. I want you to make me a shirt.”

“Thirty-five tala.” She said, happy to have me back.

I guess it’s a little weird to be speaking English. Not really, but a little bit. 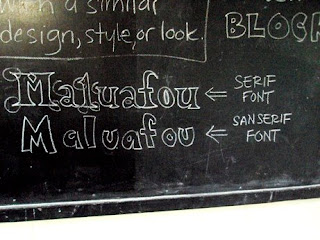 I've been practicing the art of serif block lettering. I've been exploring the chalk medium lately, but maybe I'll mature into other artforms later. 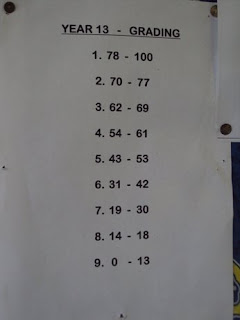 Still working on my Excel spreadsheet, I needed the grading levels for year 13s today. In America, this is the kind of thing I would email someone about... Not gonna fly here. So I took a picture of the sheet that's posted in the teacher's lounge. Technology finds a way.
Posted by Matthew at 8:00 PM

I think you'll find the "question" inflection is an influence from the New Zealand accent. We're infamous for it.

As for the Samoan word for stitch, it's "su'isu'i". And with most things in Samoan, the same word has another meaning in English, in this case a "fale su'isu'i" would be a seamstress. But I think the confusion came from your student using the Samoan translation of stitch in the wrong context.

"Alu su'isu'i sau ofu i le fale su'isu'i" - Go get your clothes made at the seamstress.

So the girl used the word su'isu'i from the first example, in the context of the second example. She really meant "Have you not got your uniform made" rather than stitched.

Great reading! Keep it up...