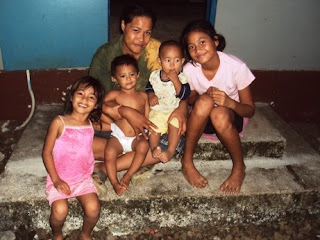 Conan O’Brien went to Ireland sometime around my senior year of high school. He made a George Kennedy joke, chose a red-headed child who loosely resembled him as his successor, and sang John Denver songs in a bar and people sang along. In addition to all that, there was a moment when he stopped some people on the street and asked their last name, which turned out to be O’Malley. The he observed, “You’re the O’Malleys, and my last name is O’Brien, so I think that means we’re related somewhere down the line, right?” They shrugged in agreement. So he hugged each of them warmly, and then finally asked, “Can I borrow some money?” I’m a little worried that my relationship with my host family is slowly evolving into a less exaggerated (and less cynical) version of this scenario.

Don’t get me wrong; my host family has been incredibly generous since I arrived at their house back in October. When I visit, they cook me meals, make sure my sleeping accommodations are comfortable, and when I was feverish back in November they kept a close eye on me. I had a wonderful time with them at Christmas, and when my parents visited last month, they rolled out the red carpet. They welcome me with open arms, and I definitely feel like I can call them up out of the blue to invite myself over.

In return, I try and do what I can. I make it a point to bring food whenever I come over; usually a can of corned beef or some mackerel and almost always some fruit. And if I can help it, I’ll try and bring something for Akanese. When my parents came, we upped the ante on gifts since it was a special occasion and all. The point is for it to be a friendly gesture, and the food hopefully alleviates any burden I cause by staying there overnight.

Then in April, Asolima drove me back to Apia after Leme’s birthday, and casually asked if she could borrow $10. She asked so casually and earnestly I was willing to lend her the $10 without thinking about it. I knew I’d probably never see the money again, but it was an innocent, out of the blue request.

Fast forward to today when Asolima told me she couldn’t sleep last night because she’s so worried about Akanese’s Term 2 school fees: they’re due on Monday, and she doesn’t know how she’s going to pay.

Part of me has no problem with this. The school fees are only $20. It’s a very small amount, and it’s going toward Akanese’s education. It’s as worthy a cause as any, and with all the generosity they’ve shown me, how great that I have the opportunity to reflect some of that good will back toward them.

On the other hand, I’m a little uncomfortable with fulfilling the roll of rich Uncle Palagi M. Moneybags. My Peace Corps salary is intended to be on par with the average Samoan wage, so it’s not like I have lots of cash to throw around. My stipend is meant to pay for food and a movie or two per month; I’m almost literally working for peanuts. But beyond that, I’m simply uncomfortable with money entering into our equation.

The bottom line is what kind of precedent am I setting, and how will this affect the dynamic between my host family and me? I realize that it’s a collectivist society, and that in building my relationship with my family, I have indirectly pledged to share with them. They look out for me, and I look out for them. And it’s not like money between family is unheard of in Samoa; in fact, Mele occasionally will call her children who live overseas to ask for help in paying a fa’alavelave (a debt one is obligated to pay when something happens in a friend or family member’s life that interferes with normal activity; e.g. wedding, funeral, canoe lost at sea, etc.).

I’ve not experienced this dynamic in my family, and so I feel some trepidation.

In any case, I hope you’re well. Pictures below. 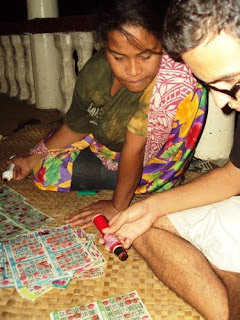 Asolima playing Bingo with me last night. I wasn't asked to pitch in for Bingo, but I won $15 on the first round, which Asolima used to pay for subsequent rounds. 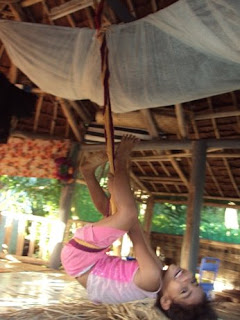 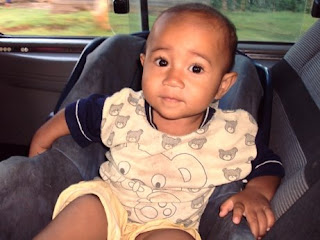 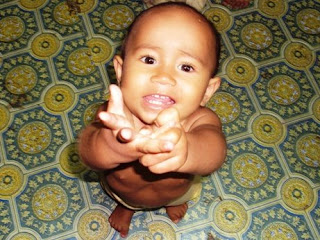 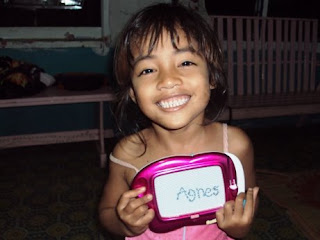 Akanese showing off the FisherPrice Magnedoodle-like thing that Mom got for her. 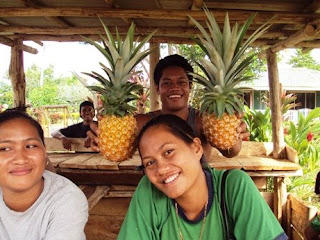 Tuese, unaware of the guy holding pineapples behind her. 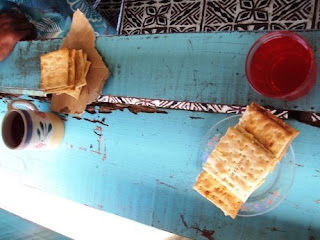 I will never be fully accepted into the village. The youth cleaned the church hall this morning, and though I did very little work, they made me sit on a bench while all of the other youth sat on the floor. I was served a glass when everybody else got a mug. And even the older man who was sitting next to me was served his crackers on cardboard while I got a real plate. I'd prefer not to have this. 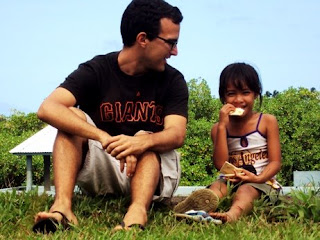 This was taken was taken with the camera on timer. I had intended to be looking at the camera when it took the picture, but I really like the way it came out.
Posted by Matthew at 8:00 PM

Here's the thing. If you do it, yes you will feel a sense of belonging and inclusiveness and that you've done something to help your host family that have been generous to you throughout your stay with them. You will think that this feeling will last...probably your whole life.
Think again. It will be more like...it will last right up until the next time they kinda "casually" ask you for money. The only thing is, is that this time around - $20 will be $40 and it will continue on this way until you leave.
From one Samoan (who you don't know at all and who's the biggest blues person in the world for leaving a comment on your blog page without even knowing who you are..sorry!) I say, don't do it the way that they want. But if (and only if) you can, bring food over or do something for them that doesn't involve money.
Ia manuia lau taumafaiga ma lou mafutaga ma lau host family. Ia manuia foi le vaiaso.

This is really a complicated dilemma. I experience something similar with my friend at SQ. He has so little and it's easy for me to help but what impact does that have on our relationship? Is the basis of our friendship mutual respect or is it economic? Do the economics make the relationship unequal? Where are the boundaries? It's hard to know the right thing to do.

Why weren't the $15 bingo winnings put toward tuition? Sometimes it's about more than the immediate issue and instead about decisions and priorities.

I say don't overanalyse it but shrug it off as the next step in your cultural experience. Im surprised it has taken this long for it to come up anyways, but you should make like everyone else does in this situation in Samoa and pitch in when you can and say sorry No when you cant.

I'm Samoan, but I don't agree with the idea that they would spend $50 on bingo and then worry that they can't pay the $20 tuition. It's Michael Jordan and Charles Barkley disease....gambling annoymous

I looooove your photos in this post...yes, especially the last one with you looking a Nese! (at her level...AWESOME!)

p.s. my Samoan Mom, living in Canada, makes VERY strong stances about giving money to family. She gives what SHE wants to give and HOW she wants to give it (at her Dad's funeral, she wanted to pay for the stone instead of giving a specific amount). She stays in charge of the giving instead of someone taking charge of what she gives! Because everyone in the family loves her SOOOO much, they seem to be fine with it! Also, because she has such strong boundaries, they respect them and her. Hope that helps!

I'm a Samoan. The Samoan reply is to make up an excuse not to give the money, but not in a way that will make you and her lose face.

She hasn't asked directly but given a hint. The reply is not to answer directly, but give a hint.

Note: 'we' 'will' 'use' 'our' 'winnings' (whatever we make) 'from bingo tonight' (instead of paying for more rounds).

Another example of a Samoan reply to a request like that is this: "Can we borrow your car to go to Apia?" (make small talk, get someone to go outside and quietly let your tyres down) and then walk outside to show them that "sorry, unfortunately my tyres died last night and I'll have to bus to Apia tomorrow to get new tyres"

:-) The art of being a Samoan is the art of communicating in a way that nobody loses face, but you still get your way (hehe)