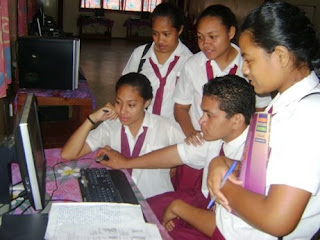 When I was in 8th grade, Ms. Barton suggested that I stop writing my name at the top of my papers and simply doodle in the palm tree that dons the header of my blog. It wasn’t my idea, but I figured it was a good deal and it fed my artistic little ego. Also for a short time in seventh grade Meghan started calling me “Bob,” and it caught on for a short time before I returned to Matt. So I guess I did my fair share of name-exploring. My Samoan students seem to be in the same state of mind.

Today was another day I spent immersed in Excel entering copious amounts of student grades. To this point, the data has been typed according to score from highest to lowest. The secretary types them into a table in Microsoft Word so they data cannot be sorted. So when the teachers compile the data, they compose the list in the same descending order. In an attempt to make this process more efficient, I automated all of the columns of data so all I had to enter was each student’s score. This would have been really fast if the lists were in alphabetical order. But they’re not in alphabetical order. So it’s a lot of scrolling up and down to find a particular student.

This is where the name game comes in with each student. Since there are no roll sheets, I’m pretty sure teachers just copy down student names from the tests themselves, which makes it difficult to trace a single student through multiple tests. That is, one student could take six tests and conceivably write a different name on each one. This comes from a number of different developmental and cultural factors… although I am speculating about each of these.

First, just like me, I think the kids are testing out different names because they’re trying to define themselves. This is especially true since they all wear the same uniform. It’s difficult to figure out who you are when you dress the same with everybody else, and any sort of change in hair style or, god forbid, facial hair is liable to get you a slap on the wrists. So changing your name is one way to be someone new.

Second, Samoans seem to have a lot of different names. People often go by their last name here, but occasionally go by their first name. Once a Matai title is introduced, a person might commonly go by a title. My Peace Corps supervisor’s name is Esera, but he is commonly referred to by his title, Fata. It’s the same with one of the language trainers: Sa’u is his Matai title that we use to refer to him, although some volunteers also refer to him by his given name, Fale. Beyond that, a Samoan name may be abbreviated in many different ways. One of my students, Tuitamaga, might one or many of the following: Tui, Ta, Maga, Tuita, Tama, Tamaga, Itama, Amaga. And whereas I find that most people either refer to me as “Matt” or “Matthew” but never both, it seems like one person might switch between several nicknames for Tuitamaga without thinking twice.

Third, in Samoan, there is T language and K language. K language is identical to T language, except all of any instance of the letter T becomes a K, and most instances of the letter L becomes an R. So in addition to all of the derivatives of Tuitamaga above, you can switch out a T and insert a K and she might go by that too.

So I guess there are lots of choices.

I hope you’re being who you want to be. Happy birthday, Liam! Pictures below. 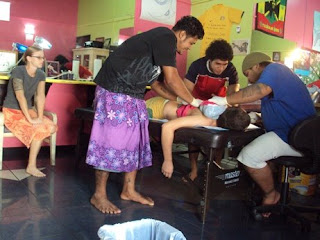 Cale got his tattoo in Apia yesterday (and today), and I was invited to stop by. It was intense. The guy in blue, Junior Salu'ape, is the one tattooing while the other two hold the skin taut. 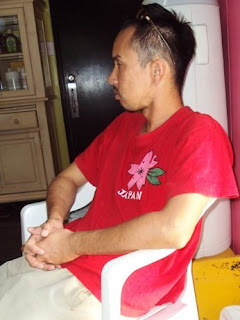 JICA volunteer Tetsuya sitting next to me in the tattoo parlor. 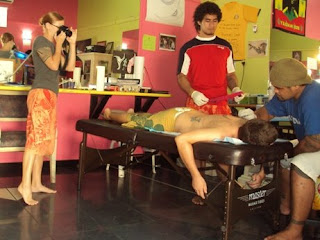 Note:Tune into Sara and Cale's blog for actual pictures of the tattoo.

The tattoo pictures are freaking me out! Just say no!

I agree with your mom. I read his blog describing the octopus but it wasn't until I scrolled down to see it that my eyes popped. OMG. Pain is a word that is so lacking in evoking what it must have felt like. No question that it is an amazing design but I too am freaked out. Yikes! and really... follow your mom advice and just say no..... WOW