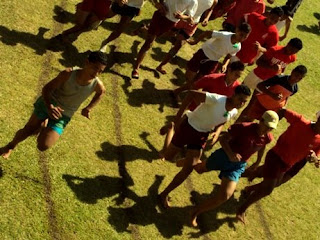 Shortly after school started, Jordan related a moment in the style of Abbott and Costello in which the school asked him to coach athletics. “Which sport?” He asked. “Athletics!” They shouted back at him. As it turns out, Samoans use the term “Athletics” to describe what we in America would call “Track and Field.” Perhaps this is a New Zealand thing? Maybe one of the regular contributors from the comments section can help.

In any case, even after hearing Jordan’s story, I was caught by surprise by today’s intramural track and field meet. It took me until yesterday afternoon to put 2 and 2 together. I had even posted pictures of the track here on the blog, but when they talked about today being an “Athletics Day” today and the “Athletics Championships” on July 3, it rang no bells. I assumed it’d be another day of rugby and netball. So yesterday’s track and field practice caught me by a bit of surprise.

The day was full of surprises, in fact, and they started early. Yesterday, another teacher, Fiu, told me I’d been assigned to be recorder (translation: scorekeeper) with another teacher, Vaifale. So when I showed up this morning, I confirmed with my principal that I was a recorder, and he said, “Yeah. You should do it on your laptop.” Aside from showing my principal how to send emails and allowing the school librarian to come in during my year 13 class to play Mavis Beacon, it is incredibly rare for my staff to show interest in doing anything digitally. So I ran back to my house and got my computer.

I also shed my ’ie and opted for gym shorts instead. As much as it freaks me out that my year 12s have an Excel common exam next Friday and we’ve barely had class since school started last week, I am cool with relaxed days like today where we as a school neglect any sort of schooling. It’s fun to see my kids outside the classroom, and it’s fun to not have to teach for a day. That said, it hardly seemed necessary to cancel classes. As scorekeeper, I had to copy the names of the participants into the computer, and it was mostly the same 30 kids’ names coming up, event after event. Whatev. When in Rome, right?

Track here is hardcore. A couple of the kids had aerodynamic spandex, but a great majority of them were running in oversized cotton t-shirts and shorts; a couple had track cleats, but most ran barefoot. Samoa’s winter technically starts on Sunday, but it’s still hot as hell, and many students collapsed as soon as they passed the finish line. Other students were on hand with cups of water, but it was still the kind of deal that made me a little nervous.

I received shot put scores, so I assume the event took place, but I never saw it. I did see quite a bit of high jump. And some of the jumpers were pretty good. I never mastered the art of the high jump backwards arched-back dive/jump, and my expectations were low for students here, but yeah… they had the form down well.

The meet stopped before long jump and triple jump were completed, so those events will take place during class tomorrow. Javelin and discus were on the agenda for the day, but Vaifale scoffed at that and told me those events won’t happen until the championship on July 3. Oh well.

I hope your day was athletic. Pictures below. 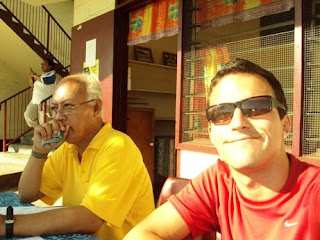 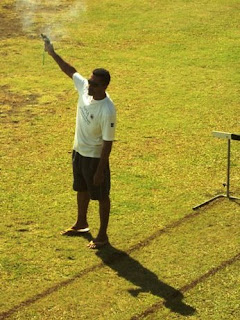 Tavita, who I often refer to as Samoan Barack Obama, was the starter for the day. 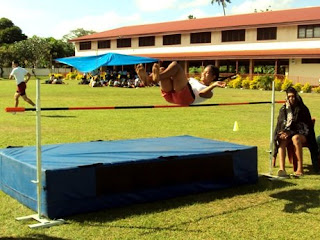 Airborne girl. It took 4 times to get this shot. 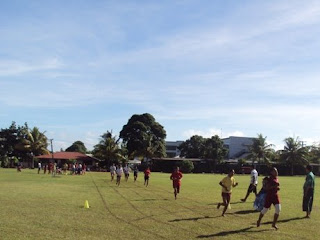 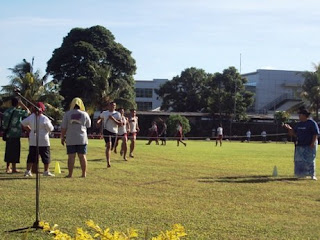 Each race had tape to break at the finish line.

... yes you are right ''Athletics'' is the term NZers and Australians use for ''Track and Field''