Fake It Til You Make It 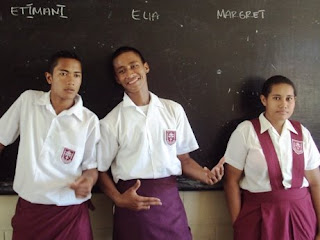 The other computer teacher got a new job, and one has not been hired to replace her. So I’ve been teaching the year 10 classes, and tomorrow I’ll teach some year 9 classes too. When I had to do this at the outset of first semester, it was overwhelming, but now it’s not so bad. The year 10s are just starting Microsoft Word, and I’ve just finished that unit with my year 11s, so I guess maybe I just feel more prepared.

It’s weird teaching different grade levels because the language barrier makes it difficult to recognize the developmental differences; that is, when I teach year 10, it’s easy to forget that they are a year younger than my year 11 students. It feels like they’re just a bunch of other year 11s that I didn’t have first term. I feel like there should be more of a jump in maturity, but I don’t really sense it, and I think much of that is because I’m not familiar enough with the language to understand the nuance of maturity.

My experience with year 11 has trained me well for teaching across a language barrier though. I was talking to RPCV Shane about teaching once, and he recalled going to visit RPCV Dylan when he was still teaching here, and how Dylan’s class was almost as much an English class as it was a computer class. And I can relate to that.

The year 9s are babies and speak very little English. The year 10s don’t either, but they’re far more liable to dip their toes in the waters of English speaking. There’s one who hangs out in the doorway of his classroom, which is near the computer lab, and after Interval once, he said, “Good afternoon!” I looked at my phone to check the time, and even though half of the school day and Interval were already over, it was only 11:15 a.m. So I told him that technically it was still morning. He seemed genuinely amused, and shouted “Good morning!” And often when I pass by now, he will still say, “Good morning!” and then he’ll wait a beat and ask, “Right?”

That need for feedback is what separates the year 10s from the year 11s, I think. Once they’re in year 11, they’re comfortable enough with English that they can steer a conversation clear of places where they’re not familiar with the vocabulary. It makes it tough to teach them because they make me feel at ease enough I start to assume they understand everything I’m saying, but that’s definitely not the case.

Year 12 is a further exercise in flaunting the parts you know and hiding the parts you don’t. By then they’ve had a year to perfect, but when pressed, the cracks are still apparent. Only in year 13 have they mastered the façade. And for at least some of them, it’s no longer a façade.

It’s a long process, and much like being able to watch Keleme develop from a smiley six-month-old to a chatty 2-year-old, I am excited to watch my students develop in their mastery of English before my time is up in Samoa. And maybe by then I won't be faking it in the classroom either. 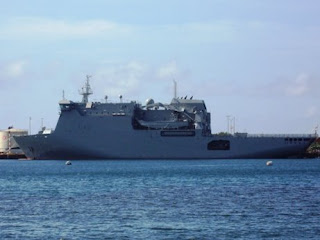 This military ship (flying a New Zealand flag) has been in port for the past couple days. 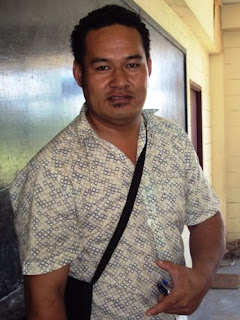 Fellow teacher Taleni getting in on the mugshot action. 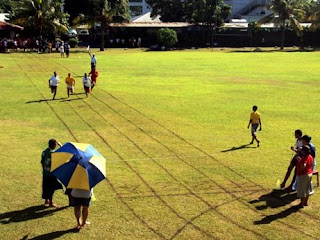 malo matt
Im just wondering about the swine flu in Samoa. I read that there was an Australian group that got put in quarantine, and one person was confirmed with H1N1. From your perspective how are Samoan people or just people in general around Apia reacting to the flu news? has it kinda filtered down yet?

I've been a lurker for months now on your blog. Living vicariously through your experience and your funny and engaging stories of home. Thanks for making this teine Samoa less homesick..I appreciate your insight and the work you're doing there as a PCV... Manuia lou aso!